Hello Berners it been a while since I opened one so here goes. With MLK day on Monday thought i’d kick off the this Meme. 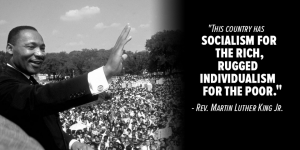 Also it seems $hill tells Dems to vote for Bernie: well actually for the Dem most likely to win in 2020 — well that is Bernie 🙂
Was reading an article about someone at WOTB wanting to organize a protest if Bernie gets screwed over. I think it would make 68 look like a picnic. Keep in mind the police forces nowadays aren’t as “restrained” as they were back then.

Thanks for starting a thread wi61!

Thanks for kicking this off, wi61. I’ve been worried that no one was going to extend me the opportunity today to lurk. I really appreciate all you guys and gals. I even miss windancer(sp?) and tyranno… My sister and I were just talking a few days ago about Chitown ’68. Hope it doesn’t get to that.

Did you hear about the latest scandal?

Right on the heels of Joy Reid and her body language expert (who is apparently a regular on Lou Dobbs) we learn this!

Btw, by ‘FREEZING’, they are referring how Bernie’s team asks hotels to:

Well he moved to VT. He must like the cold! 🤗

But with comfortable bedding. Most everyone sleeps better when the temperature is lower. There are also some rumors from the same media who said that Jeff Zucker at CNN has instructed the producers to turn up the heat during Bernie’s upcoming town hall.

1) I much prefer cool air at night for sleeping.

2) Really?? I hope that’s a joke about turning up the heat!

I’m reminded of a young Sudanese refuge in the documentary Lost Boys of Sudan say that if he mentioned (am paraphrasing) that it was hot outside in the Walmart parking lot as he gathered shopping carts he might hear,’thought you’d be used to it!’, he laughed, and went on to say, “Just because I’m used to it doesn’t mean I LIKE it!”

Most is pretty basic stuff that you or I would do, security for campaign material I don’t have to worry about that, just a precaution by Bernie and staff. If you want real crazy demands look at a rock band or tv stars or other politicians –the’re out in the twilight zone.

In Iowa, it’s less of a problem because he won’t make viability and his supporters can recaucus with Bernie. In NH, Bernie is also losing votes to Tulsi, but a good portion of her voters are Republicans who wouldn’t vote for any other Dem.

“If Sanders has a problem in New Hampshire, I think it’s a Yang problem,” said Dante Scala, a political science professor the University of New Hampshire’s Carsey School of Public Policy and a local demographics expert. “Every young voter Yang takes, I think you could make a good case it’s a Sanders voter.”

Sanders easily won the state’s primary in 2016 with 60 percent of the vote, thanks in large part to a coalition of young people, independents, and voters looking outside the establishment. Based on interviews conducted at dozens of events held over the past few months, Yang is attracting the same types of voters at his campaign stops

Tulsi will crash in NH. She’s not polling that well.

I’ve seen more Yang and Bernie signs here in the West LA area. None for Biden or Warren.

The young people who were fervently behind Bernie in 2016 won’t bolt to Yang. A lot of them don’t trust hm. If anyone goes for Yang, it will be tech nerds who are usually ‘meh’ about politics.

When we are in the White House we will never stop fighting for justice and equality for all women. Join me live in Portsmouth, NH with @NaomiAKlein: https://t.co/7jJSkF6CB8

Donald Trump wants to privatize the Postal Service and threaten over 630,000 jobs. That absolutely cannot happen. I’m proud to stand with the postal workers of Local 44 as we fight to strengthen USPS, protect jobs and allow post offices to provide basic banking services. https://t.co/uOpivHRadl

I have been waiting for the Bernster to start raising havoc here. He was passionate about the USPS on the Hartmann shows.

I have put out a statement on @PublicTheaterNY's cancellation of the run of THE TRUTH HAS CHANGED. Here are screen shots of the whole statement. I will be putting excerpts in this tweet thread: pic.twitter.com/sNPL7CkXFL

"Bernie does has a sort of physicality, you know, when he talks — that is a shaking your finger at Hillary Clinton, shoving your finger, wierdy…." — @JoyAnnReid to her body language expert.

I suppose this ” expert ” isn’t Jewish?

This appears to be antisemitic to me.

MSNBC is a fucking disgrace. What it allows on its air – this segment of bullshit charlatan body language analysis to prove Bernie is lying mixed with Joy Reid's anti-semitic stereotypes about his pushy use of his hands when speaking – is appalling but typical. The hacker did it. https://t.co/BHPyg6cPSG

Sen. Bernie Sanders (I-Vt.) is set to headline a campaign event in Iowa for his presidential bid next week in the middle of the Senate’s impeachment trial.

Sanders’s campaign announced that he will hold a rally at the University of Northern Iowa on Wednesday evening, the day after the trial of President Trump is set to kick off.

The senator is also slated to hold two events in Iowa on Monday, on the eve of the impeachment proceedings.

I read somewhere that Biden has been hoarding most of his Iowa campaigning for during trial.

The wide-ranging discussion I had on @RollingStone's "Useful Idiots" with @mtaibbi & @kthalps was one of my favorite about US politics in awhile. Here's my 2-part answer about going on Fox & disgusting accusations of being a white supremacist sympathizer/fascist-enabler: pic.twitter.com/EwNbb5bWEI

extended Greenwald interview by Taibbi. Glenn on at 35min

Our planet is seriously burning and the adults keep letting us down. when will everyone realize the LAWS ARE WRONG? #howdareyou https://t.co/CmH4vumsnP

“Joe Biden commands a boardroom” Barf. Looks like we know where that endorsement is going. Quelle Surprise!

So why are they so easy on Joe? I can only speculate.

I think part of it is that they’re a bit awestruck. (“Joe Biden commands a boardroom,” the New York Times editorial board wrote about its collective interview with him.)

Part of it is that when Biden answers questions about his fitness by saying “look at me,” our elite journalists are simply not rude or direct enough to say: “Yeah, we look at you, and what we see someone who often can’t complete a coherent thought.”
:

Maybe, like Biden’s fellow candidates — who have also failed to sufficiently confront him in their debates or take out negative ads — they are worried about blowback from Biden’s supporters.

Maybe they just can’t bring themselves to help Bernie Sanders and Elizabeth Warren.

Most likely, these journalists — the most elite of the journalistic elite — are just plain comfortable with Biden, and don’t feel remotely antagonistic, because he reflects their centrist, Washington cocktail-party ideology.
:

By not actively asking Biden any hard questions, these top-tier journalists are offering de facto support for the pre-Trump status quo ante, without overtly looking like they are taking sides.

But if they allow a weak candidate to become the sole alternative to Trump, which appears to be the unacknowledged or unconscious goal, the net effect may be paving the way for four more years.

Trump tweet: “They are rigging the election again against Bernie Sanders, just like last time, only even more obviously. They are bringing him out of so important Iowa in order that, as a Senator, he sit through the Impeachment Hoax Trial. Crazy Nancy thereby gives the strong edge to Sleepy [Biden].

Even a blind Squirrel finds a nut, Trumpcorp not far off from being actually right on something for a change and I hate to admit it.. Next complaint will be that Bernie uses a private jet to go to Iowa during the trial.

Shocked that Wapo ran this! Not that Cnn or Msdnc would either. Still the question that the weapons of mass deception cant answer is how come young people 35 under are for Bernie? Look at the Butti surge!!!!, from 0% to 1% a 100% increase :). Bernie has to start hitting Uncle Joe on his votes on Medicare and soon, maybe some of our fellow boomers will wake up.Another point for black boomers concerning Social Security – Almost three-fourths (72 percent) of African American beneficiaries rely on Social Security for at least half their income, compared to less than two-thirds (65 percent) of all beneficiaries. And they trust Bydone– crazy