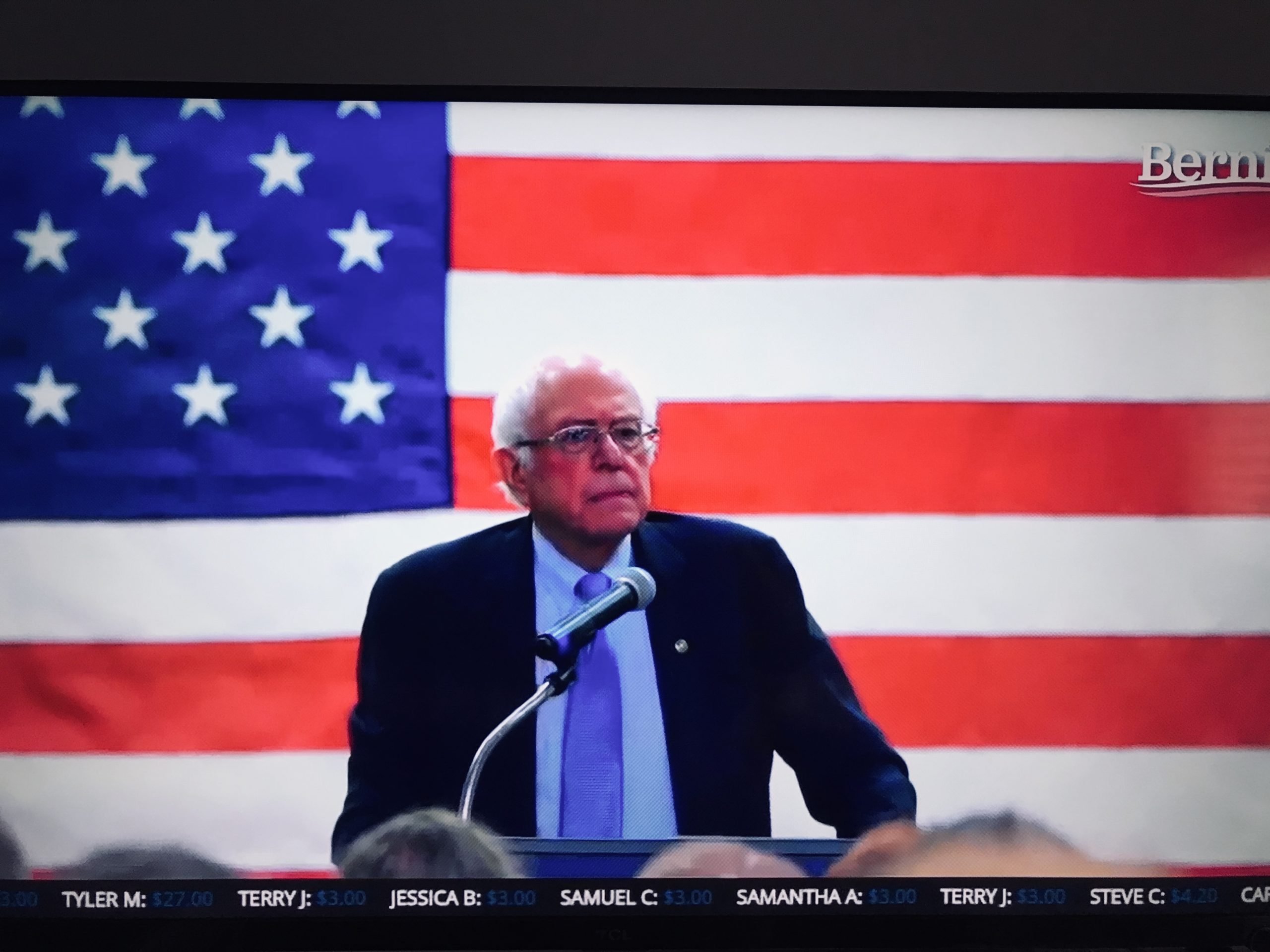 Three thousand more troops are being deployed to the Middle East.

BREAKING: The U.S. is reportedly sending roughly 3,000 more troops to the Middle East in the wake of a U.S. drone strike that killed top Iranian general Qassem Soleimani and a standoff at the U.S. Embassy in Baghdad, triggered by U.S. airstrikes. pic.twitter.com/VwD8vBnnxP

Bernie will be delivering remarks at his event at noon. Here’s a link to the live stream for the remarks.

Tim Kaine says he will introduce a war powers resolution on Iran in order to bring a debate to the table.

The conclusion of @BernieSanders address on the assassination of Qassem Soleimani #NoWarWithIran (2/2) pic.twitter.com/TbOLN3W3f2

I spent 2 years serving in the military Honor Guard.

Had to bury 100s of soldiers that died in war.

I folded the flag & handed it to working class families, “On Behalf of the United States Military, We are Sorry for your loss.”

It won’t be Billionaires kids dying out there. pic.twitter.com/FIMjvNmFi2

The 2020 Democrats should step up

Administration officials have asserted that Trump might have the power to go to war with Iran under the 2001 Authorization for Use of Military Force, in which Congress empowered the president to go after those involved in 9/11. That’s an absurdly strained reading of the AUMF.

But President Barack Obama also repeatedly abused the war power, for instance by citing the same absurd justification for war against the Islamic State.

That legacy is one reason why all the 2020 candidates should reaffirm support for the idea that the warmaking power rests with Congress. Numerous candidates have done this — Sen. Bernie Sanders (I-Vt.) more forcefully and Joe Biden less so — but now is the time for them to reiterate their pledges not to abuse this power.

“It would be wise for all the Democrats running for president today to reaffirm their support for the War Powers Act and their intention to comply with it,” Murphy told me. “That would put additional pressure on the president to comply.”

Good to see my Sen. Murphy speaking out. I hope they all listen to him.

This made me remember what happened just over a year ago when Murphy joined Sanders and Mike Lee:

The Senate vote this month to end U.S. support for the war in Yemen marked a historic break from a bipartisan embrace of a pro-war foreign policy, yet it was accomplished without strong backing from Washington’s liberal foreign policy infrastructure.

The resolution, co-sponsored by Sens. Bernie Sanders, I-Vt., Mike Lee, R-Utah, and Chris Murphy, D-Conn., invokes the rights laid out in the War Powers Act of 1973 that assert Congress’s authority over war, and it was the result of many months of work by a coalition of progressive activists and anti-war lawmakers. The war is Saudi-led, but the U.S. has provided critical support, and an end to that support effectively means an end to the war.

Backers of the effort approached the Center for American Progress, Amnesty International, Human Rights Watch, and the American Civil Liberties Union, and all declined to specifically endorse the resolution or become members of the activist coalition. And when a procedural vote on the resolution came to the House floor, it got the same kind of half-hearted support from Democratic leadership, falling just three votes short.

The (Yemen) issue is especially sensitive to the Center for American Progress, the most prominent Democratic think tank in Washington, because it has been criticized for accepting significant funding from the embassy of the UAE, one of the Gulf countries leading the war on Yemen. The UAE gave CAP between $500,000 to $999,000 in 2017, according to the organization’s website.

How that awful woman Neera Tanden gets away with calling herself progressive is beyond me.

they let an amendment to the ndaa be stripped that did exactly that.

Five questions in at Tom Steyer event in Spirit Lake and no audience questions on Iran pic.twitter.com/NXV2Tm0TDG

Will today be remembered as the day that Sen. Bernie Sanders (I-Vt.) “locked up” the 2020 Democratic nomination?

Ben Smith, editor-in-chief of BuzzFeed News, suggested Friday there’s a “decent chance” of that, noting how Sanders’ response to President Trump’s ordering of a drone strike that killed Iranian Gen. Qassem Soleimani stands out among the top candidates in the Democratic field.

Democratic presidential candidates have been weighing in on Trump’s decision, with Sanders describing the strike as an “assassination” and a “dangerous escalation” that “brings us closer to another disastrous war in the Middle East that could cost countless lives and trillions more dollars.”

Though all of the 2020 Democrats were critical of Trump’s decision, BuzzFeed notes that “Sanders took a different tone, one drawn from a wing of the party that has opposed American wars since Vietnam,” while most other leading contenders “took more cautious” stands, being sure to begin their statements by condemning Soleimani.

Politico’s Holly Otterbein made a similar observation, noting that while former Vice President Joe Biden noted that “no American will mourn Qassem Soleimani’s passing” and Sen. Elizabeth Warren (D-Mass.) called Soleimani a “murderer, responsible for the deaths of thousands,” Sanders’ statement “does not have such a beginning.”

Sanders was initially the only one of the Democratic candidates to describe the killing as an assassination, though Warren later on Friday did so as well.

12:25, looks like Bernie is about to get started in a few min. I see Faiz and Avi on the stage.

Bernie is on stage and calls the attack what it is: an ordered assassination of Soleimani.

Bernie reminds folks of his work as chair of the Senate Vets committee. He has seen too many soldiers come home with PSTD, and most of them are not the children of billionaires; they are from working-class families.

Trump has put us on the path to a situation that could be worse.

The role of the US is to work internationally, not unilaterally. That is how he will implement his use of military and diplomatic powers afforded. Trump does things impulsively. Believes Congress should be the first line of authority when it comes to using military force.

At a time when half of million are homeless, 87M are underinsured or not insured, we need to address the threat of climate change, we must get our priorities right, and not spend more on endls=ess wars.

#No war with Iran

"I know that it is rarely the children of the billionaire class who face the agony of reckless foreign policy, it is the children of working families." @BernieSanders #NoWarWithIran pic.twitter.com/x0p9qjNxvd

i love you Bernie!

Isnt young Baron at least old enough to be participating in ROTC or some similar program?

Isn’t he schooled at home? or attends a private school?

I think private school near the WH. He’s grown quite tall. I hope he turns out better than the other kids. The older Trump boys are despicable.

Thought I would add that about 60% of the new millionaire/billionaires out their are due to trust funds, they never worked for it. Trumpcorp was so bad at handling his that Fred had to bail him out.

Oil is up too. We have a local gas station chain that has been manipulating gas prices where I live for about 4 months now, it will spike to either $2.44 or 2.49 on Monday and then by Saturday or Sunday it goes back down to $2.29 or so. Most of the other stations follow suit but a few others stay at $2.29.So I wonder what will happen on Monday, What will they spike the price to?

The Iranians control the Straits of Hormuz. Go look at a map. They will have no problems jamming them up so oil shipments are delayed or destroyed. They are Persian, not stupid, and had an Empire a few centuries ago. T and R, Benny! 🙁

The US and other world powers have screwed up the middle east since the downfall of the ottoman empire its a total FUBAR now.

"I am proud to tell you that I have voted against all of Trump's military budgets" – @BernieSanders https://t.co/df6EnDjCug

Trump sure knows how to ruin Gretas moments

Thank you so much for all the birthday wishes today!!❤️ pic.twitter.com/ydnoUZ6E8H

She is going to outlive Trump and his ilk because together with Bernie, Greta, AOC, etc, we are going to address the climate crisis.

BREAKING: Iranian news are reporting that they're attacking the airbase right now, they've surrounded it and there's fighting going on.

I’ll look to see what Kyle is referring to.

Appears to be not true

Update: These reports of attacks on US base are not true according to Iraqi military officials. https://t.co/TBV26xxLcf

Amazing. 400 words and not once does he actually oppose Trump’s killing of Soleimani . Nothing but posturing, unspecified handwringing and high minded West Wing-ese filler https://t.co/WMAAUBmFpD

Yeah even Biden was better. Plus he didn’t have to wait until the next day.

So if I’m reading this right, he just put everything in one take: Suleimani was bad but so is Trump, and war is good but bad, and did I mention I was a naval intel officer?

Good for Bernie to hear there are still problems with the VA. Someone said they can’t get in to see a doctor on tricare.

Look at this ‘leader’…

He is such a damn phony.