We did what they said we couldn’t.

We ran when they said we shouldn’t.

We won where they said we wouldn’t.

Let’s do this, TN ➡️ https://t.co/NefIL08FJjpic.twitter.com/DFm4qbox7j

She sounds awesome. Thanks

We haven't see positive testing rates like this at any point during the US pandemic. Overall US positive test rate has shot up to 7.3%, and testing has decreased.

What happens when you have such extremely high positive test rates?
This. Via the sharp 👀 @thehowie https://t.co/7Jzl8GlHEC

Correct and two other points: 1) Bob Wachter's post yesterday on San Francisco – positivity rate at 0.83%. 2) Rachel Maddow's interview yesterday with a KU Professor who has published data on Kansas counties with a mask mandate v. those without.

These numbers from the Midwest are terrifying.

And the poster is correct about NYC. We ALL wear masks and believe in Science.

Trump’s nonsense about “Democrat” states is looking even more insane and illiterate now.

The Covid world tour in Wi is just beginning the next super spreader events are.

Halloween parties at the bars, its on a saturday, since Evers was over ruled on bar occupancy.

Then Thanksgiving people will get toegether and spread it more

So i’m expecting a YUGE spike in late Jan or early Feb in WI unless something changes.

The Sturgis Motorcycle Rally last August was a yuge CV disease pit. No masks nor social distancing, and thousands of yahoos attended. 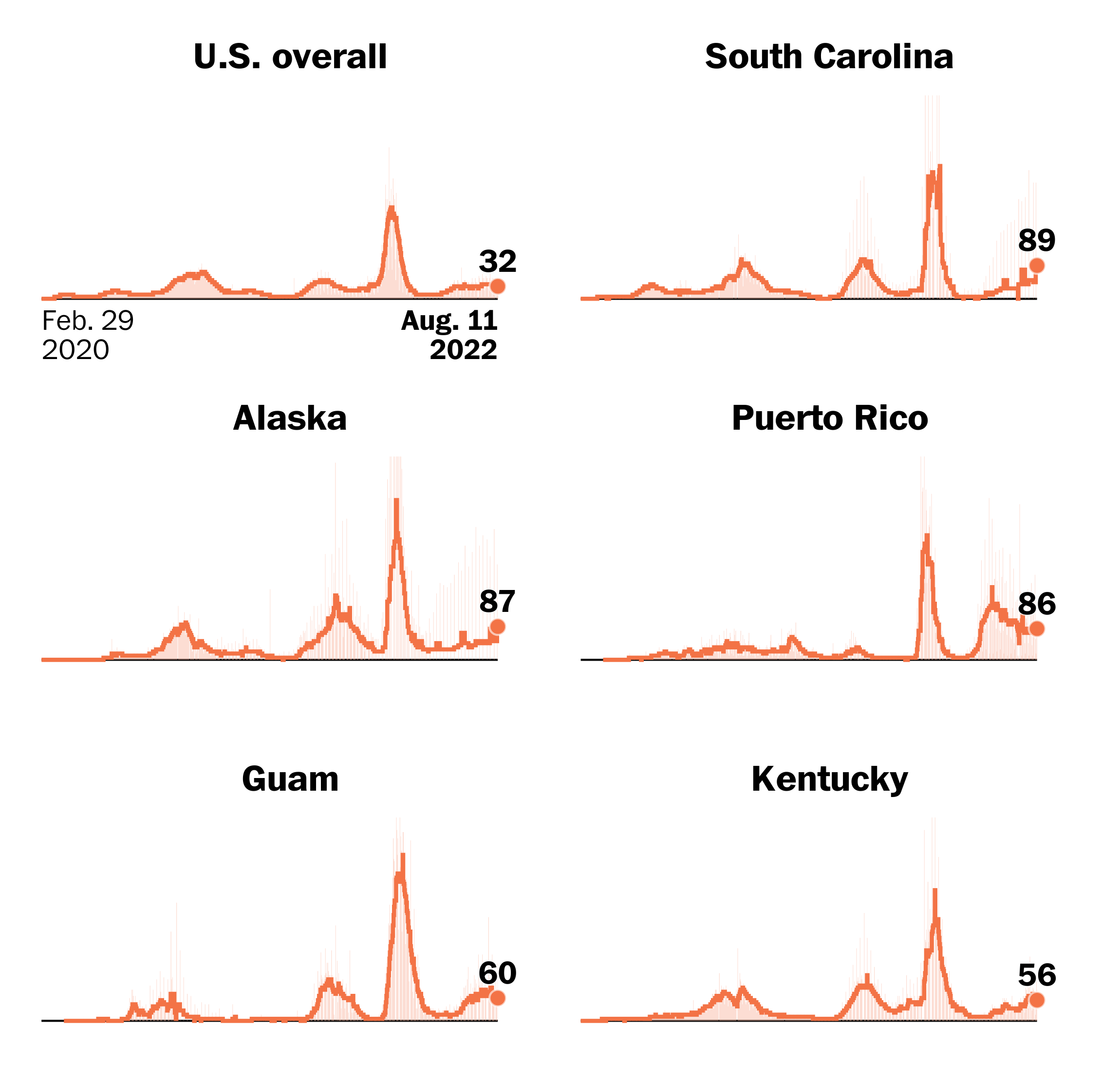 This story is one huge five alarm Trump corruption scandal with individual acts of corruption by Barr, Whitaker, and Mnuchin. https://t.co/zxayB4d1Or

When Erdogan tried to press Biden to intervene in the case, Biden pushed him off. Told Erdogan:

"If the president were to take this into his own hands, what would happen would be he would be impeached."

Biden was right. It was impeachable. And Trump did it.

The tip of the iceberg, if Trumpcorp loses, people will come out of the woodwork to save their asses.

Corbyn is being suspended from the Labour Party for telling the truth that bad faith accusations of anti-Semitism were wielded against him by those who simply hated his political agenda. The fact that he refuses to accept the lies about him is intolerable so he must be destroyed. pic.twitter.com/0zrkPTCrit

Just as his parents fought alongside Jews against fascists in the Battle of Cable Street… if in this country we were ever to face again the threat of the rise of far-right extremism on that scale, where there are pitched battles in the street, I am absolutely certain that Jeremy Corbyn will be on the frontline of those battles fighting alongside his Jewish comrades whilst people like Boris Johnson and Jo Swinson will be running for cover.

Indeed, Corbyn has a long and impressive record of fighting antisemitism which stretches back for many decades. And as Labour leader, he has taken strong action to stamp out the small amount of racism that exists in the party – a record which general secretary Jennie Formby recently laid out clearly. But he has faced consistent smears from right-wing opponents who have weaponised allegations of antisemitism to attack him.

I will strongly contest the political intervention to suspend me.

I’ve made absolutely clear those who deny there has been an antisemitism problem in the Labour Party are wrong.

I will continue to support a zero tolerance policy towards all forms of racism.

Check it out, the wikipedia page for Jeremy was updated 17 minutes ago to include this event.

TPTB would love to bury him forever.

In just 100 years, fossil fuel use has more than undone 5000 years of natural cooling. It's hotter now than any time in the history of human civilisation. We are catapulting ourselves out of the Holocene into uncharted territory. Current life on Earth is not adapted to this. pic.twitter.com/4fZbiXptbd

out of sight temp rises

tRump out of money? Ain’t he a billionaire?

Good morning everybody. Here are some of Today’s interesting numbers:

78 Million Americans have voted early so far. One million in NY State, including 500,000 in 5 days in NYC. These numbers are even more remarkable when you realie that it has been and will continue to rain most of the time. There are 4 more days to vote early.

732,000 Americans filed Unemployment claims. Slightly down from the previous weeks but what does that matter in a situation where job losses continue to pile up and no stimulus or aid of any kind will be coming.

There were 81,457 new Covid cases and 1016 deaths yesterday. The forecasts I’m hearing on TV about 100,000 new cases a day which seemed unlikely to me a few days ago, now seem all too likely.

There’s a posting down this thread which gives numbers that are truly terrifying.

FIVE DAYS TO GO UNTIL ELECTION DAY. Hang on. Stay safe from fire if you are on the West Coast and stay dry if you’re anyplace between the Gulf Coast and the East Coast.

That includes the Midwest.

I’ve been in southwest MO for the past few days (a trip planned some time ago) and it is definitely the Beatles here.

Since you’ve mentioned MO I spoke to my daughter this morning and she called from a line to Early Vote.

This is interesting because last week I checked online and a few sites told me that MO doesn’t have Early Voting.

I believe it is called Absentee voting. Similar to early voting.

When we lived in Missouri, you could do an “absentee ballot” by early voting at the courthouse if you wouldn’t be able to vote on election day. We did it because Hubs is always on the road. They let me vote, too. Maybe they expanded this year because of Covid?

Missed this a couple of days ago

Senators Bernie Sanders and Elizabeth Warren entered an unexpected clash on Tuesday with New York Democratic leaders over the fate of a progressive third party.

The dispute stems from a political flier paid for by the state party featuring Joseph R. Biden Jr., his running mate, Senator Kamala Harris, and Senators Warren and Sanders, all smiling and pleading with New Yorkers to vote “Democratic — all the way!”

But Ms. Warren and Mr. Sanders said they were not consulted about the flier, and had they been, they would not have consented to the ad, which pushes voters to cast ballots on the Democratic Party line.

Both senators support the Biden-Harris ticket, but want ballots cast for the candidates on the Working Families Party line, which has backed them in the past.

“It is absolutely unacceptable for the New York Democratic Party, which just a few short months ago supported canceling the presidential primary, to now use my image in a push to punish the Working Families Party,” Mr. Sanders, an independent from Vermont, said in a statement.

“They never asked my permission and I wouldn’t have given it if they had,” he said. “I believe New Yorkers should vote for Joe Biden and Kamala Harris on the Working Families Party line.”

That sentiment was echoed by Kristen Orthman, a spokeswoman for Ms. Warren, who said the Massachusetts senator “didn’t approve this ad” and asked that digital versions of it “be taken down.”

Under state law, candidates in New York can collect votes on several different party lines, a system known as fusion voting. But under a new law adopted this year, political parties in New York have to earn 130,000 votes — or 2 percent of the total vote — every two years in order to automatically retain their ballot lines. Parties that do not reach that threshold would have to petition for their candidates to appear.

State Democratic officials acknowledged that they did not seek permission from either senator, or the Biden ticket, to use their images, but defended the $357,000 campaign, which also included digital advertisements using images of Senators Warren and Sanders.

Perdue is a jerk but I can’t get too excited about Ossoff.

Me either. But I voted for him as the lesser.

With Perdue actually a lot lesser.

Workers who haven’t been employed since early March are nearing the end of their allowed jobless benefits. Most states cover 26 weeks of benefits, & the feds added 13 weeks to that. W/o further action, millions will begin losing benefits right before the year-end holidays.

This is desperately sad. Tell me again about the “richest country on earth.”

Maybe it’s time we drop that metric. We are the largest consumer, but not richest. The 1% skews reality.

Basically consumerist drones for the rich

And this is the “Best” the US can do for its citizens. When will people figure out its not R v D, Its the rich and powerful against the rest of us. Since the rich own both establishment parties they have them keep the R v D charade in order to keep uninformed Americans at each others throats and laugh all the way to the Bank.

It’s always nice when LD has a bit of time to start us off!

Didn’t see this until today. Apologies if it is a dupe.