Tonight we find out how much of a check the American people want to have on our Executive Branch. Or put it another way, how many of the 1000 legislative seats will the Dems gain from the last 10 years of losses? Will voters feel comfortable with the economy and overlook Trump? Will Trump’s divisiveness prevail and turn out his base?

Will we see our first women Native American Congressional Reps? First AA governor of FL and first female gov of GA? How well will the OR candidates perform in this cycle?

Of course, we hope there are no machine irregularities, but it’s anticipated that some will occur. And election lawyers will be on hand just in case. 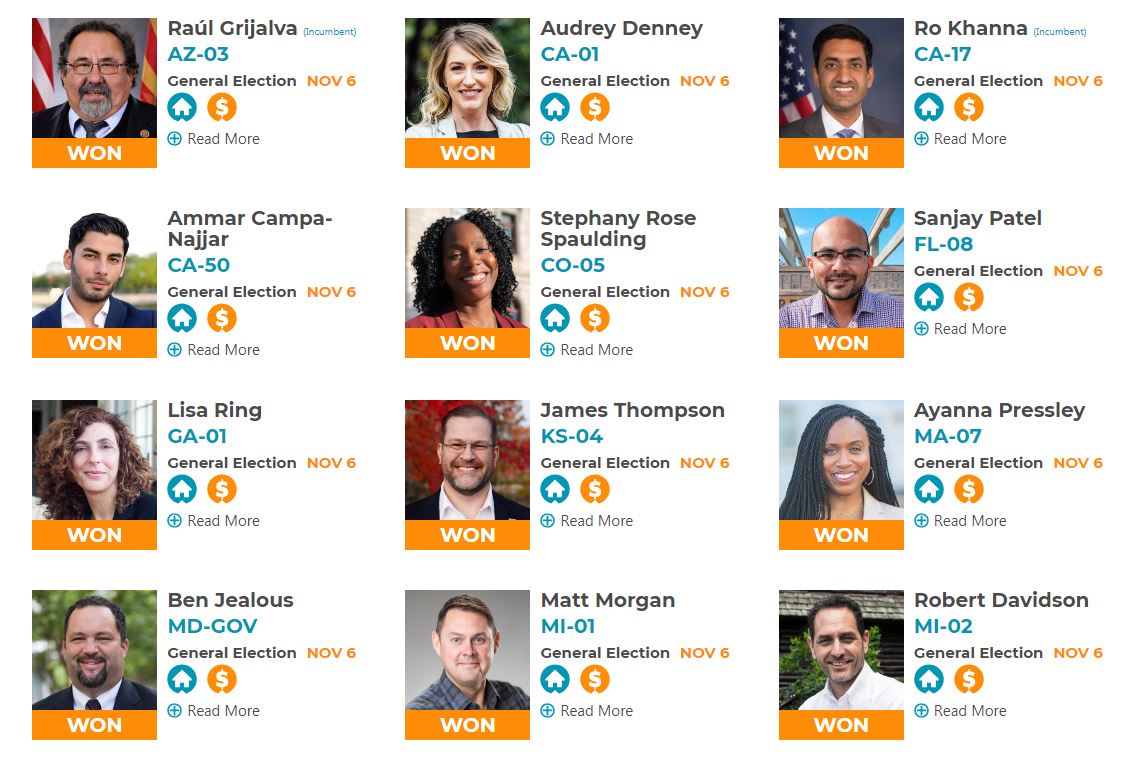 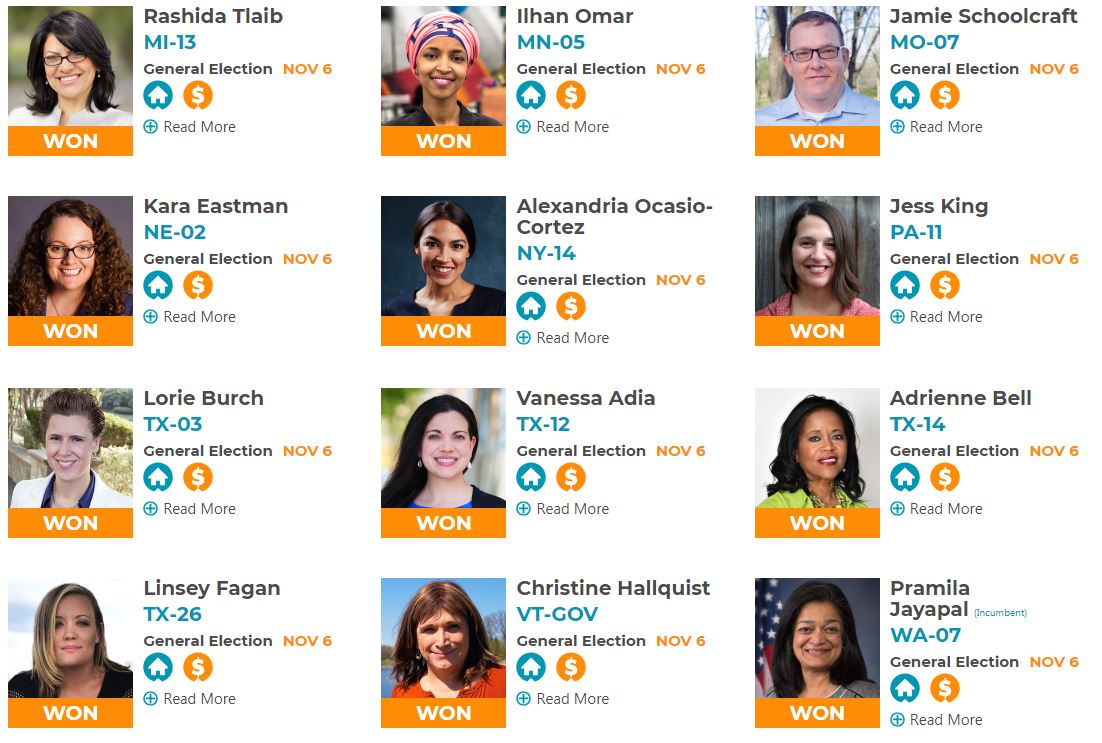 In the Senate, Democrats are defending 26 seats while Republicans are only defending nine. 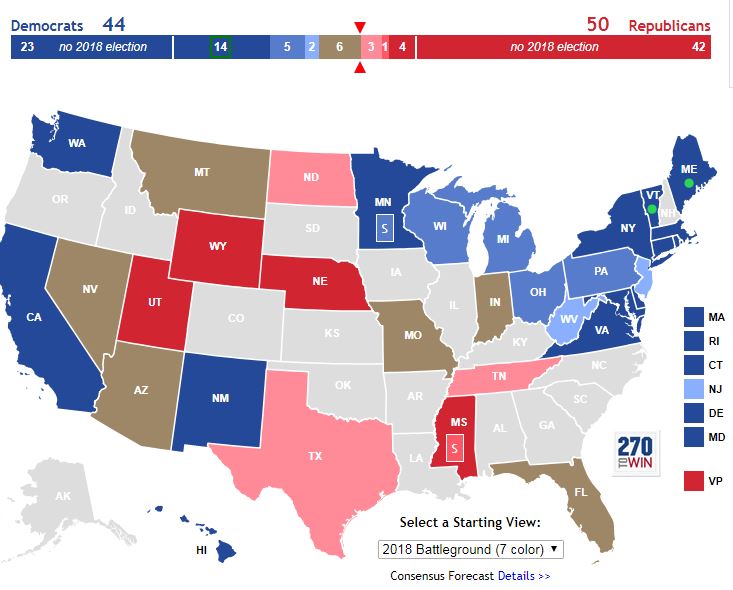 In the gubernatorial races, there are 33 races, in which Dems could possibly pick up 9 of them. 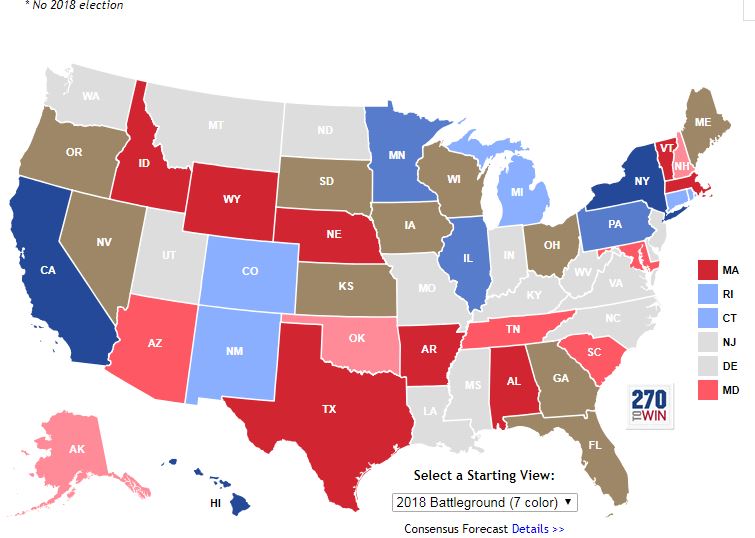 Add the races you are keen about in the comments!

Well here we go TPW land, just got back from voting and I was 685 which the poll worker said was about 50% of the ward I’m in as of 4pm. Dane county (Madison) is on fire as their expected to have presidential number turn out. The other big one is Milw county which is also up in turn out. Its gonna be A nervous night in WI. Plan on pulling up the 2014 gov race and comparing the numbers as the night goes on. Fingers are crossed so I don’t the bite the nails 🙂

Patiently waiting for our polls to close in about 50 minutes EST. I will be a very happy camper if:
*Get rid of Sick Rott
*AGillum makes history
*Amendments 4 and 13 pass
*Get rid of at least one state supreme court judge.
wi60, Scott Walker will be history. gawd knows we’ve suffered through enough FRightwingnut nonsense in our states. T and R, Benny!!

You will note OBF that I listed Sick Rott rather than his last name. I hope we don’t have to type those words much longer. 🙂

Your off to a good start Orl

Reading about tons of voting issues across the country, one example:

In St. Louis: Poll workers are not accepting voter ID cards. Instead they are demanding drivers licenses or other forms of photo ID, which a judge ruled in October that Missourians don't need to vote. https://t.co/v8CBabV5FV (via @electionland)

And lots of possible cheating is not even detectable.

The voters have the numbers. They need to raise holy h3ll and not stop until their votes are gathered and counted!

MSDNC is reporting that in Chandler, AZ, the building owner of a polling place foreclosed on the tenant overnight, locking in all of the equipment and supplies, and poll workers could not get in. That’s a new one.

Wow, that’s even worse than the school where the machines were locked in a utility closet, with the person holding the key home for the day! (they eventually sorted that one out but, of course, a lot of people had already left)

Back in Queensbridge towards the end of the night — one scanner still down. Another scanner malfunctioned earlier leaving the largest public housing project in the US with just TWO voting machines. Poll workers here have never seen a line so long. pic.twitter.com/YgCuSJ5G5V

Also for those of you who have cable, The Intercept is teaming up with Democracy Now for election coverage on Free Speech TV. Briahna Gray is on the show!

Thanks for the thread Benny!!!

And thanks for that tip. Looks like Free Speech TV is carried in CT on Hartford Public Access Television, not sure if I get that channel but will look.

One quick question, maybe very a silly one, but why does your graphic say ‘WON’ under all those candidates?

I snipped directly from the JD site. It means they won their primaries. You will see Nov 6 as the new election date.

Ahh, I get it now. Thanks! I hope each and every one of them gets to keep their photo caption.

Great Alice Cooper! I have not heard that song in a long time.

Hopefully, there will be a lot of first timers!

From MSNBC, first-time voters nationwide prefer Democrats to Republicans by a margin of 63 to 34%

Alice Cooper was always too drunk (his fave drug) to even think about voting.

He did another version making fun of Trump in 2016, but I like the 1972 version better.

I saw Alice Cooper during the Welcome to my Nightmare tour in 1975. It was surprisingly good.

Lou Leon Guerrero was elected the first female governor of the U.S. territory of Guam on Tuesday.

The Democratic ticket of Leon Guerrero and Josh Tenorio as lieutenant governor reportedly defeated the Republican ticket by nearly 9,000 votes.

Guerrero and Tenorio got 50.7 percent of the vote from 67 precincts, while the Republican ticket got 26 percent and write-in votes accounted for 22 percent, according to KUAM News.

LMAO. One last reminder that @ScottWalker is an absolute fraud.

The Foxconn deal is a fraud. Scott Walker is a fraud. He always has been. pic.twitter.com/WvMI8RscIJ

Yuck, yuck, yuck. They need to raise all kinds of havoc in GA.

Corporations sending friendly messages telling you to “go vote,” as if they care about the intrinsic value of voting and not the outcome your vote will help achieve, is transparently phony and should be opposed on the ground that corporate phoniness ineluctably degrades society

Amy McGrath is losing in KY-6 in double digits, but maybe it will improve soon. Still very early.

I admittedly wasnt a big fan of McGrath after her launch video featured footage of bombs dropping on people in the middle-east so havent really followed her campaign as much as I probably should have.

Obviously the sponsors of the MSM are more interested in the race than we are.

Same here. She’s just too much ra-ra-military for me.

I agree. They should not be able to deploy that “look at me killing brown people” crap without some accountability.

They are on their own as far as I am concerned. They do not represent anyone I am aligned with.

McGrath is winning Lexington by the amount needed. If she can keep rural margins down, she can win. Very close.

“There is one wave that is in existence and that is the green wave,” McDaniel told MSNBC’s Chuck Todd while discussing a possible “blue wave” at the ballot box. “The Democrats have far outspent our candidates across the country with their small-dollar fundraising.”

“But the fundraising that the Democrats have had at the small-dollar level has been enormous,” McDaniel said. “And that is part of what is helping them be competitive tonight in a lot of these seats.”

It’s not as though Beto O’Rourke needs a helping hand from celebrities in his bid to turf Ted Cruz out of his US senate seat from Texas. After all, Beto O’Rourke is quite the superstar in his own right.

But then, who would object to having Beyonce on their side? The singer has popped up just a few hours before polls are due to close in Texas, posting a photo on her Instagram feed of herself wearing a Beto for Senate cap.

“Every vote counts, Every race matters, Everywhere,” she wrote.

Polls have been giving Cruz a small but significant lead over O’Rourke in recent days, though the gap has been tightening. O’Rourke himself likes to point out that he hates polls and has consciously avoided employing any pollsters in his campaign.

So pollsters be damned. With less than three hours to go before polls in Texas close, there is all still to play for. And maybe Beyonce is the one to swing it.

I think its a little late for a Beyonce bump, but overall it probably doesnt hurt.

GOP gubernatorial candidate Brian Kemp also had a voting issue today. When he tried to vote, his voter card said "invalid." Our @DaveHWSB was with Kemp today as he voted and is covering the campaign all night. #ElectionOn2 https://t.co/d4yktfco6v pic.twitter.com/YR9FeJUijj

I don’t like any voters being denied, but in the case he reaps what he sows when it comes to his vote.

So, does he have to go through the (I expect, arduous) process of clearing this mistake up?

Iowa early vote numbers are in. Compared to 2014 …