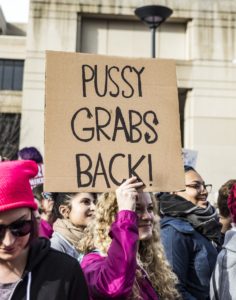 The past 10 days have been a #MeToo bonanza for the corporate media.

We have heard the constant drum beat by the media, exacerbated by GOS and a few other select blogs about Senate candidate Roy Moore’s predatory behavior toward under aged teenage girls while he was a DA.   Seems a lot of women have stepped up to make similar claims.   And defense attorney Gloria Alred is at the forefront to represent those who chose to talk to the media.

Doesn’t take more than a stone’s throw to remind anyone of someone’s pussygate revealed 13 months ago.   Women marched the day after the inauguration of Herr Drumpf–together with men and children to protest the dirty launder of 1600 Pennsylvania Ave.

Also dredges up memories of Bill Clinton and his predatory mannerisms while he was governor of AR in the 1980’s and while in the WH.    Bill Clinton was impeached for lying to a grand jury about it.

Then a woman steps forward today to let the world know that Al Franken groped a woman.  Michele Goldberg penned an op-ed this evening urging Franken to leave his post.  But the Russians love that news, per someone at TOP.

Meantime, the House GOP voted today for one of the largest corporate giveaways to CEOs and Forbes 500,  handing its bacon for the Senate to chew and swallow. Those who exercise their stock options would get up to 7 years to pay their taxes after they got their shares cashed in.  More poor people have to pay for tax cuts millionaires are getting. Never mind the working poor people and the middle class are getting nickled and dimed (to borrow from Barbara Ehrenreich).  Moreover, the Senate is considering repeal of the ACA mandate, throwing 13 more million off health care rolls in the next few years.   What happened to care, not cuts, GOP and media?  Check out the analysis in WaPo.

Keystone XL had a major spill this evening, just as the state of Nebraska is weighing in whether or not it should allow it to pass through.   I give the NYT a little credit for pushing out that headline in my e-mail feed this afternoon considering dirty laundry draws more eyeballs.

Do not get me wrong, I think sexual harassment is terrible, especially when women are told no one would believe them.  I’ve had my own share of #metoo.   But the media is saturated with dirty laundry of politicians and entertainers.  Al Franken hit the jackpot today.

I will leave you with Don Henley’s “Dirty Laundry”, a 1982 tune that was destined to become a classic about a media that has become more about salacious headlines.

I make my living off the evening news
Just give me something, something I can use
People love it when you lose, they love dirty laundry

Well, I could’ve been an actor, but I wound up here
I just have to look good, I don’t have to be clear
Come and whisper in my ear, give us dirty laundry

Flint has been out of no running clean water for 3 years.  Let’s get the spotlight back on folks like Flint who need to feel safe about living day to day.   I am thankful this blog pays a great deal attention to such things.

Tips for a better laundromat…

Uh oh, will Gillibrand now be tossed aside by certain factions?

Gillibrand Says Bill Clinton Should Have Resigned Over Lewinsky Affair

Yes Benny, I cannot help but wonder how all of this “Dirty Laundry” will be used to distract from everything from leaking oil pipes to disastrous tax plans.

I was wondering about the timing of the Weinstein reveals when that began, and now, with the floodgates wide open, it feels orchestrated. And in some ways that the egregiousness that has occurred towards woman is being diminished by the ensuing onslaught.

That’s what I wondered too. I think Trump and his ilk got the goods on Franken to pull out and distract.

When I was a kid I noticed how that was done in England. It was all about scandals. Murdoch’s influence unhelpful.

Murdoch is the guy Henley dedicates this version of Dirty Laundry in the video clip.

Definitely there is much news that is always ignored, and no doubt this is part of that. I’m glad to know about certain people, though. it is important and it’s important for the women to be heard and for us to know our tax money is covering it up fergawdsake.

But yeah, if someone didn’t have it on here, i probably wouldn’t know about it. LOL. Been so busy, too.

Speaking of Flint, they have postponed getting a new water contract.

After another nine hours of closed-door meetings with attorneys and representatives from the MDEQ and EPA on Thursday, Nov. 16, the council listened to nearly two hours of public comment poised against the 30-year proposed contract with the Great Lakes Water Authority before calling the night quits.

Council President Herbert Winfrey said the decision to postpone the meeting – scheduled to pick back up at 10:30 a.m. on Friday, Nov. 17 – was made after the council received “a lot more information” about the contract in the last week than it has in the last six months.

Although the council has been under increasing pressure from the city’s administration and state since April to sign off on the contract, Winfrey said this week was the first time the council and mayor sat together to discuss the deal.

I agree Benny. It seemed a little hasty to me.

I’m not impressed with JD. It’s not just the logo, either. The contrast between Moore and Franken regarding Gropergate is yuge. Enuff said.

would like to see it happen, even if it is hasty. although Ellison has his moments of caving, I don’t think he’d ever be full throttle for a neolibcon like Franken was.

Have you ever been to Minnesota excluding Minneapolis and St.Paul?

I immediately stopped my monthly contribution. To suggest Mark Dayton would replace a guy who made one sophomoric blunder that made someone uncomfortable with an excellent representative specific to 05 is the height of amateurishness.

Keith Ellison is very popular in his district, but Minneapolis is not Minnesota; it’s one-fourth of Minnesota (even that number probably includes the greater metro – hey, I only lived there, lol).

There are many career politicians who actually want Franken’s seat and smell blood. Ellison isn’t one of them.

Nina weighs in but tells truth to power in her distinctive way..

OMG! This line of thinking is problematic. Making light of these types of abuses for political expediency has been acceptable for far too long. In matters of sexual abuse giving a damn about which Party secures seats should be the least of our worries. The city is in a crisis! https://t.co/YXqvS84AI6

These are the 9 Senate Democrats that supported the Keystone Pipeline, which is now leaking in South Dakota.

Yea for Sam Ronan for tweeting this:

I agree @NancyPelosi which is why the @DNC should take a stand and push for #UniversalhealthCare and #MedicareForAll which is @SenSanders proposed bill to give Americans the Health Care they need and deserve!

You could lead the way!

Or continue to push for #ACA reform instead https://t.co/AjlcpVZNHU

About those tax giveaways..from one of the Sanders staffers

And this from Ryan Cooper (The Week correspondent):

soaking broke-ass grad students to pay for a private jet subsidy. all out class war on the 99 percent https://t.co/0IthwM4wFO

Did you see that graph I posted on the today’s OT? They’ve crafted it precisely so that the lower middle class and the already precariously perched lower rung economic class bears the brunt! Ruthless.

Pic is how it would look in ten years compared to now.

I couldn’t believe that little nugget of awfulness that got inserted into the tax plan. I used to work at an aircraft mgmt. company and believe me when I say, those people do NOT need a tax break!

Just a quick note on the Franken media frenzy complete with sharks and buzzards.

Rebecca Otto, the ultimate caricature of a career politician for the last 30+ years, is the loudest bullhorn calling for his resignation.

If she doesn’t intend to take the seat herself, she wants it for one of her career DFL friends. For those who think Franken is a neoliberal sellout, you ain’t seen Minnesota’s professional Democrats.