Just coming out of Politico:

Sanders to Delay Defense Veto Override in Bid for $2000 Checks

Sen. Bernie Sanders will filibuster an override of President Donald Trump’s defense bill veto unless the Senate holds a vote on providing $2,000 direct payments to Americans.

“McConnell and the Senate want to expedite the override vote and I understand that. But I’m not going to allow that to happen unless there is a vote, no matter how long that takes, on the $2,000 direct payment,” Sanders said in an interview on Monday night. The Vermont independent can’t ultimately stop the veto override vote, but he can delay it until New Year’s Day and make things more difficult for the GOP.

The House passed the payment boost sought by Trump and Democratic leaders on Monday evening, and Trump said the Senate has agreed to “start the process” on a stimulus checks vote when he signed the $900 billion relief bill. Senate Majority Leader Mitch McConnell has yet to address the timing of such a vote.

Under Senate rules, Sanders has the ability to keep the chamber in during the holiday week and likely mess with the campaign schedules of Sens. David Perdue (R-Ga.) and Kelly Loeffler (R-Ga.). Those two face Jan. 5 runoff races for control of the Senate against Democrats Jon Ossoff and Raphael Warnock, who are both campaigning on the $2,000 checks.

A source close to Sanders said the Senate races were a factor in his decision — part of a bid to keep Perdue and Loeffler in D.C. and focus the campaign on their position regarding the $2,000 checks. Sanders also threatened to shut down the government earlier this month if the coronavirus relief bill did not include direct payments; ultimately it included checks of up to $600 and the government stayed open, though now Trump wants to go much higher.

Though veto overrides can be filibustered, as Sanders plans to do, it is a rare procedural move because the veto override already requires 67 votes and the filibuster is simply a delay tactic, according to the Congressional Research Service.

Sanders said he hopes McConnell allows a vote on the checks on Wednesday.

Leave it to Bernie and his experience in Congress. And it was so worth every penny I contributed to his campaigns. He’s not a backbencher!

11:20 AM CT: Bernie on the senate floor. Schumer has already requested consent to vote on the House bill. McConnell objected, Bernie has started his fillibuster. 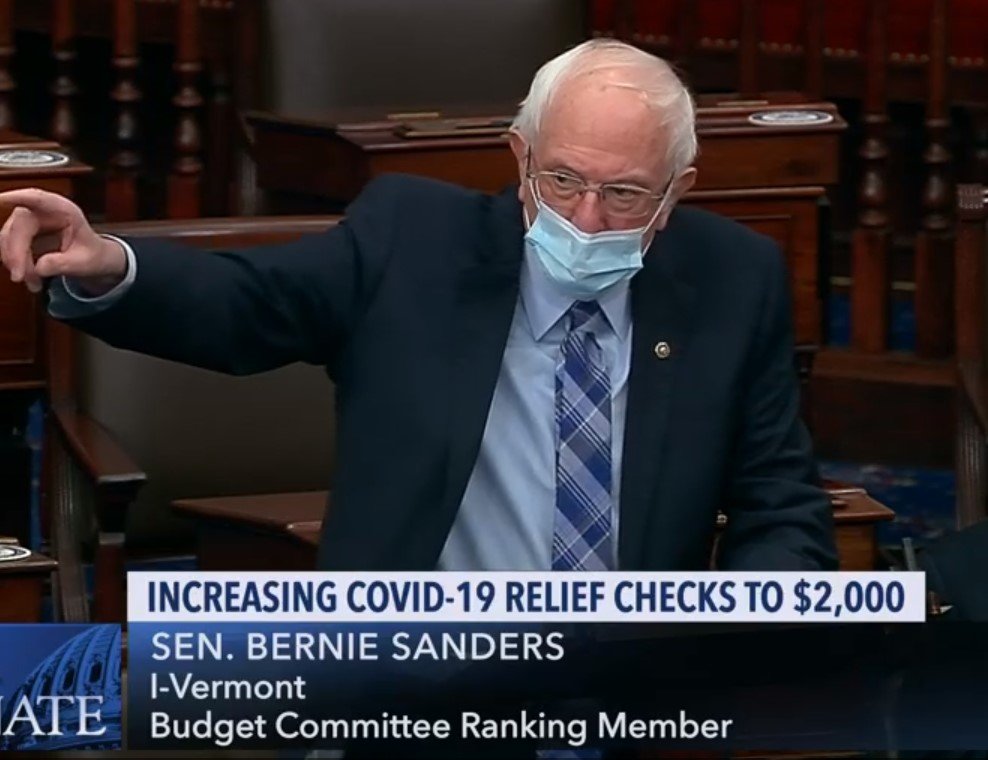 “McConnell and the Senate want to expedite the [defense] override vote and I understand that. But I’m not going to allow that to happen unless there is a vote, no matter how long that takes, on the $2,000 direct payment,” Bernie said tonight in interview

I will be joining @BernieSanders in blocking the defense bill until we get a vote on $2000 in direct cash relief. That relief passed in the House today with 44 Republicans voting for it. Senate Republicans must do the same and get the American people the help they need. https://t.co/gPbdiUZ4cf

Big power play here. Without unanimous consent, it would mean Loeffler and Perdue would have to stay in DC longer losing valuable campaigning time with 8 days til runoff election with polls so tight wins could go either way. So McConnell best get that $2K payments vote in NOW! https://t.co/qikjPp5sZR

Chip in whatever you can right now before our end-of-year deadline to keep Georgia blue: https://t.co/0Ej8TqhwKp

grandkids got every last cent. bought my last groceries for December today. i’m doing fine, tho. plenty to eat, roof over my head, yada yada. I ended up throwing out the whole chicken mushroom dish. no need to maybe eat toxic crap, i’m worth it. made a batch of cranberry sauce with fresh cranberries today, too. And listened to imagine dragons, chain smokers with cold play, portugal the man, etc., while i was making it! fun times.

makes me want to cry. i love this man.

Ten years ago, I decided to become a teacher and proudly served the BX under @JamaalBowmanNY’s leadership. Despite the odds, we created a new reality of safety, creativity and learning for kids. Now I get to carry that fight to Congress as Chief of Staff, serving NY-16 again. pic.twitter.com/yKTMBb8rPZ

do you have these saved? this is great!

I just did a quick google search.

Note that this says Wednesday. There will be some revelatory actions on the floor tomorrow but no resolution of what the Senate will do on NDAA or the CASH Act ($2000 checks) https://t.co/6gZoIMUuEO

Giving the American people $2,000 is the least the @SenateGOP can do.

Kentucky has been devastated by the pandemic – food scarcity is up 40% in the state. Most KY households would get $2,000 survival checks if Mitch McConnell holds a vote on the House bill that passed tonight. https://t.co/b3wruw1vY2

The Turtle only cares about donation checks -not any for the 99% , Then again Kentuckians did vote for the Turtle by a large amount again

How come he’s the one Senator who is a public servant? What’s up with the remaining 99? T and R, Ms, Benny!! 🙂

question for the ages, orl. :fistbump:

Markey is joining him on this. Let’s hope Merkley, Baldwin, Gillibrand, Warren, etc join the fight.

There is a lesson in this fight over $2000 stimulus checks:

Democrats should use the House to make big asks for the American people—checks, health care, etc.—and let Republicans explain to voters why they’re holding them up.

20 Democrats had the courage tonight to vote no on the bloated defense budget. Please RT & thank them. They are changing the culture of endless war & calling for more investment instead in the American people.

Looks like they [the House] passed the override on the defense bill.