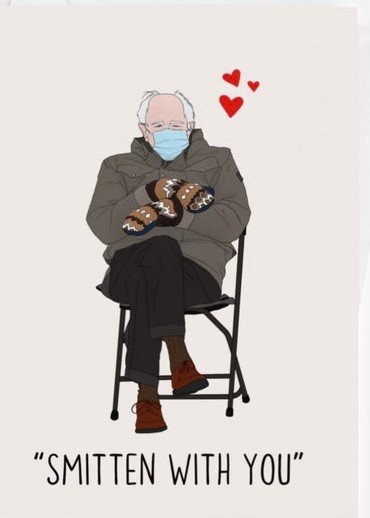 as the queen of Bernie memes it was my duty to make this valentine pic.twitter.com/auQU2ZuTAT

Here’s a long-winded article TL;DR that in the end confirms what is widely known. Andrew Yang leads the 30+ candidates in this race now and will most likely finish if not #1 than surely in a very close encounter with another of the 2 candidates, Scott Stringer, (pale, male and stale in nyc talk,) or Eric Adams, former nyc Police Officer.

The other two dozen plus are wasting their time and money.

That looks like one of my pups: a tricolor hunting Beagle. 🐶🤎😊

Unicorns are magical, chaotic good, and very dangerous to those who intrude upon their forest (David Sutherland, AD&D Monster Manual, TSR, 1977) https://t.co/BmiWU4VGrR pic.twitter.com/z0T2ykYtDB

"If public health measures are lifted, cases could rise dramatically depending on spread of B.1.1.7."
–Ontario's COVID19 science advisory table.

(Public health measures are being lifted to varying degrees around the province over the next 10 days.) #covid19ontario pic.twitter.com/vnpWfXFXq6

Along the Valentine’s Day theme..

“If Democrats could not persuade 10 of their GOP colleagues to hold a former president accountable for provoking a coup attempt that left five people dead, progressives asked, why would they expect to convince 10 Republicans to join them in breaking the archaic 60-vote Senate filibuster that is standing in the way of crucial legislative priorities?

“The fact that we could not get even 60 senators to vote for the most obvious proposition of convicting Trump is a clarion call for eliminating the filibuster!” Rep. Ro Khanna (D-Calif.) tweeted, a sentiment that others echoed in the hours following the Senate’s second acquittal of the twice-impeached former president.

“Dear centrist Democrats, you couldn’t even get 10 GOP votes to convict the guy who sent a mob to kill you all. You think you can get them to vote on issues like immigration/climate? Come on,” immigrant rights activist Erika Andiola said Saturday. “You have to end the filibuster and use every tool at your disposal to get things done.”

From the Reverend Barber

We cannot get this close and then fall back. We say to President Biden, to Democrats, to Republicans, to senators, to all of them: don’t turn your back on the $15 an hour minimum wage. Listen: 55% of poor, low-wealth people voted for this current ticket. That’s the mandate. The mandate is in the people who voted, not in the back slapping of senators and congresspeople. It’s the people who voted. And if we turn our backs now, it will hurt 62 million poor, low-wealth people who have literally kept this economy alive, who were the first to have to go to jobs, first to get infected, first to get sick, first to die. We cannot be the last to get relief and the last to get treated and paid properly. Protect us, respect us, and pay us.

Bad news for all the self-proclaimed “Cuomosexuals” out there! Turns out your corona-crush isn’t quite the hero you once thought he was. Almost a year into the pandemic it seems that Cuomo-mania has finally subsided and the governor of New York’s pandemic response is getting some much overdue, and less than flattering, scrutiny.

Andrew Cuomo was practically deified by liberals in the early days of the pandemic because, let’s face it, anyone looked amazing compared to the train-wreck that was “try-injecting-bleach” Donald Trump. While Trump was in a state of dithering and denial, Cuomo took charge and was reassuringly direct: people across the US tuned into his daily press briefings. There was speculation Cuomo could be the next president.

Of course, being good on camera doesn’t mean you’re doing a good job on the ground. In recent weeks there have been calls for Cuomo to resign over allegations his administration tried to hide the scope of coronavirus-related nursing home deaths in New York. Two weeks ago, New York’s attorney general, Letitia James, released a report stating nursing home deaths were 50% higher than originally claimed. On Friday damning new allegations of a cover-up emerged. The New York Post reported it had obtained a recording of one of Cuomo’s top aides admitting the administration withheld data on nursing home deaths because it was worried the Department of Justice would investigate state misconduct.

It has always been obvious to anyone paying attention that Cuomo is a mini-Trump. He has the same appetite for authoritarianism as the former president: during the pandemic he has drawn scrutiny for cancelling special elections, issuing executive orders and consolidating power. Like Trump he has nothing but disdain for his detractors, particularly if they happen to be more qualified than he is. The New York Times recently reported that nine top New York health officials have resigned during the pandemic, with many of them telling the Times that Cuomo had asked them to match their health guidance to his decisions. But who needs experts, eh? Not the all-knowing Cuomo. “When I say ‘experts’ in air quotes, it sounds like I’m saying I don’t really trust the experts,” Cuomo said of pandemic policies in a recent news conference. “Because I don’t.”

The administration’s handling of nursing homes is now a full-blown scandal — a stunning reversal for Cuomo, whose early handling of the pandemic and high-profile daily press briefings earned him soaring approval ratings, an Emmy and a book deal.

Now, many fellow Democrats want to write an epilogue.

As Cuomo headed to Washington Friday to meet with President Joe Biden on pandemic response, at least 14 Democrats from the left flank of the state Legislature called for a repeal of the governor’s emergency powers — enacted nearly 11 months ago — that have given him nearly unilateral authority during the pandemic. And momentum appears to be growing in the Legislature to exert more oversight.

“It is clear that the expanded emergency powers granted to the Governor are no longer appropriate,” lawmakers said in a statement issued Friday morning.

Senate Majority Leader Andrea Stewart-Cousins said in a statement she, too, was not pleased with how Cuomo’s office had handled legislators’ requests for information about nursing home deaths.

“Politics should not be part of this tragic pandemic and our responses to it must be led by policy, not politics,” Stewart-Cousins said in a statement.

Senate sources say leadership is much closer to limiting the governor’s authority than they have let on publicly.

”We basically had a conference on this executive power stuff on Monday,” one source said, requesting anonymity to speak about closed-door negotiations. “Momentum was moving toward removing executive powers. The latest revelation — this almost slam dunks that.”

White House press secretary Jen Psaki was asked during a Friday briefing if Biden, who has touted the importance of transparency for the nation’s recovery, felt confident in Cuomo’s administration in light of the recent report.

“The president hosted Gov. Cuomo and a bipartisan group of governors and mayors to the White House today to get their perspective from the front lines, not to give anyone a stamp of approval or to seek their stamp of approval,” she said.

Gov Cuomo made a deadly mistake of handing out legal immunity to nursing home executives while sending 9,000 COVID patients to understaffed nursing homes. We need full accountability and immediate full repeal of the legal immunity.https://t.co/phKUTDG8hS

Honestly, I think churches should be taxed when they enter the political arena.

they want churches instead of tax hikes, but guess i’ll take anything. you’re right, though. does this mean the government will be giving MORE money to churches, cuz that’s not supposed to be how our secular govt works. ugh

Moreover, it gives the WH permission to take taxpayers’ money and use it for private schools.

Undeterred by the backlash and widespread delays that followed his disruptive operational changes at the U.S. Postal Service last year, Postmaster General Louis DeJoy is reportedly planning to roll out another slate of policies that would significantly hike postage rates and further slow the delivery of certain kinds of mail.

While the plan has yet to be finalized, new details of the proposal—first reported by the Washington Post—intensified pressure on President Joe Biden to take decisive action before DeJoy inflicts any more damage on the most popular government institution in the country.

“Fire DeJoy before he burns down the USPS,” Zephyr Teachout, associate professor of law at Fordham University, tweeted Saturday. “Biden has the power to fill the board that decides his fate. That board should be full of people who believe in public postal services. And that board must be ready to fire him quickly.”

Biden should fire the governors of the USPS who appointed DeJoy, install new ones, and have them fire DeJoy. He should not be allowed to continue destroying the postal service. https://t.co/JLw3yUNHVe

President Biden should immediately remove and replace the entire Postal Board of Governors. We need a Board of Governors that will remove Postmaster DeJoy. It is the only way to restore faith in this institution and save the Postal Service.

Happy Valentine’s Day, Mr. Turner. Couldn’t imagine being on this journey with anybody else ❤️😍 pic.twitter.com/NE4MIuAO7K