the Nevada caucus votes that would give Bernie Sanders a sweeping victory, and newfound momentum for his antiestablishment bid for the Democratic presidential nomination, were beginning to be counted, the rival campaign of Michael Bloomberg growled out another objection to the anticipated results of a contest in which the billionaire candidate had chosen not to participate.

“The Nevada results reinforce the reality that this fragmented field is putting Bernie Sanders on pace to amass an insurmountable delegate lead,” complained Bloomberg campaign manager Kevin Sheekey. “This is a candidate who just declared war on the so-called ‘Democratic Establishment.’ We are going to need Independents AND Republicans to defeat Trump—attacking your own party is no way to get started. As Mike says, if we choose a candidate who appeals to a small base—like Senator Sanders—it will be a fatal error.”

Sheekey would have been wise to wait for the full picture of what the Sanders campaign accomplished in the battleground state where the senator and his backers put a heavy emphasis on grassroots organizing and mobilization.

The tabulation of Saturday’s caucus votes and polls of caucus-goers refuted the false premise of Bloomberg’s campaign that Sanders has a narrow appeal. The senator clinched a “huge win,” in CNN’s words. That win, coming on the heels of popular-vote victories in Iowa and New Hampshire, positions Sanders to counter the naysayers who keep questioning whether the democratic socialist is electable. That’s a rare opening for any candidate—and one that he now must seize by making a savvy argument for why he can not just win the Democratic nomination but also defeat President Trump in November.

In Nevada, Sanders showed genuine signs of strength. The senator swept the first round of caucus voting, securing a 2-1 margin over his closest rival and the erstwhile front-runner, former vice president Joe Biden. Sanders substantially increased his lead in the second round, where backers of contenders who fell short of viability realigned with a unity candidate.

By Sunday morning, with a majority of the precincts reporting, Sanders was winning 46 percent of county delegates from across the state and looked to be on track to secure as many as 10 pledged delegates to next summer’s Democratic National Convention. The closest contender, Biden, was picking up almost 20 percent of county delegates. Former South Bend, Indiana, mayor Pete Buttigieg, was at 15 percent. Three other candidates—Massachusetts Senator Elizabeth Warren, Minnesota Senator Amy Klobuchar, and billionaire Tom Steyer—finished with 10 percent or less.

Entrance polls of Nevada caucus-goers showed Sanders winning among men and women, running a solid second (behind Biden) in the race for the African American vote, carrying the Latino vote with 51 percent of the total, grabbing 65 percent of the vote of Nevadans under age 29 and 50 percent of those aged 29 to 44. Sanders swept the union vote in a state where a key labor organization had raised concerns about his support for single-payer Medicare for All health care reform. He finished up with a 2-1 advantage over the next-strongest candidate, Warren, among the 64 percent of voters that identified as liberal. And he tied Biden among the 34 percent who identified as moderate or conservative.

That line set off Bloomberg, party insiders, and a lot of pundits, who ripped into Sanders and his anti-establishment campaign. What Bloomberg and his apologists fail to understand is that challenging political power brokers has significant appeal among grassroots Democrats and independents. Notably, in Nevada, of the 17 percent of caucus-goers who identified as independents, Sanders won 50 percent. The next-closest contender, Buttigieg, was at 13 percent, and no one else was in double digits.

With his front-runner status confirmed after the first three contests of 2020, Sanders needs to engage with the electability debate in a more serious way. He really does have to make the “Bernie Beats Trump” message of his campaign posters central to his message going forward. Democrats know where he stands on the issues, and they agree with him—62 percent of those polled in Nevada said they favor responding to health care concerns with “a government plan for all instead of private insurance.” But Democrats and independents who lean toward the party are desperately determined to defeat Trump; in Nevada, two-thirds of those surveyed said it was more important to have a candidate who can upend the president than a candidate they agree with on issues.

Bernie has been a busy bee in Texas! Yesterday, he held rallies in El Paso and San Antonio; today, he was in Houston, and soon to arrive in Austin, the heart of the grassroots.

Following Senator Bernie Sanders’ victory in the Nevada caucus this weekend, the presidential hopeful will be holding a rally in Austin at 5 p.m. Sunday.

The rally will be held at Vic Matthias Shores, the same site where Senator Elizabeth Warren held a campaign rally in September and where then-Texas Senatorial candidate Beto O’Rourke held a rally a year prior.

Sanders’ success in Nevada has had some including FiveThirtyEight’s Nate Silver suggesting that “Sanders is easily the most likely Democrat to win the nomination.”

But there is still more political work to be done before that determination can be made. Fourteen states including Texas will vote on Super Tuesday, March 3, offering a chance for the candidates to add to their delegate totals. 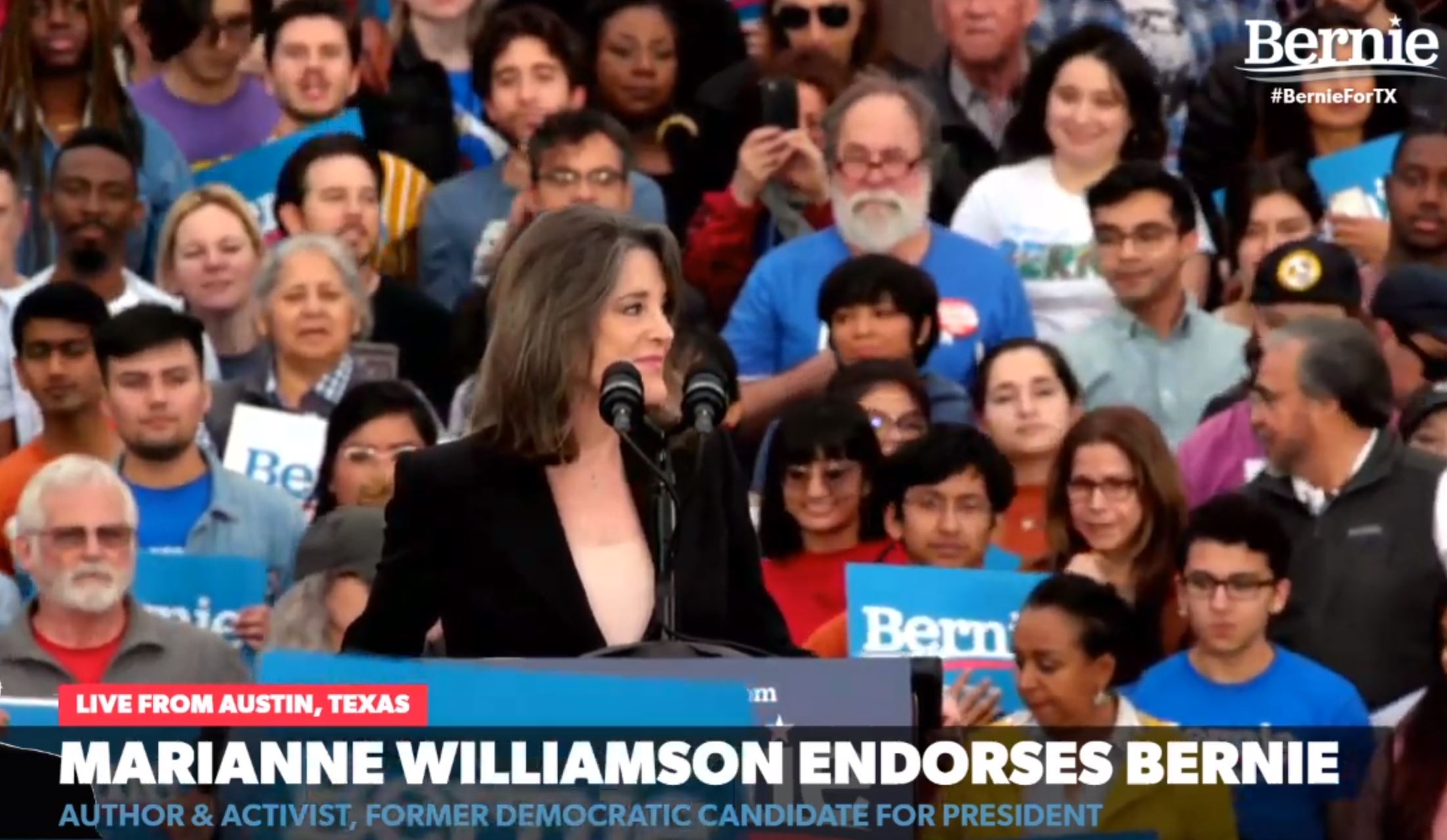 Williamson is a native Texan, so it makes sense to announce it in Austin.

More gibber jabber in the comments. This also serves an open thread.

Tip jar for the usual suspects…

Thanks @Benny! I’ve been fairly sick the past few days so going to take one more day off to rest up, but will be back to posting tomorrow.

In 2010, I had good union health insurance. Obamacare was the law of the land. In November that yr my 1yo son was struck by a careless driver in a crosswalk. After two surgeries and a night in intensive care, he died.

aking aim at the “corporate media” who doubt his ability to defeat Mr. Trump in November, Mr. Sanders began the rally by rattling off recent polls showing him doing just that.

“Some of the folks in the corporate media are getting a little bit nervous, and they say, ‘Bernie can’t beat Trump,’ so let’s look at some of the polls out today,” he said, before citing numbers that showed him beating Mr. Trump in the general election and in battleground states.

He then fired salvos directly at Mr. Trump, calling him a liar and a “fraud.”

“We have a president who is undermining democracy, who calls ‘the media enemies of the people,’” he said. “And no matter what your political view may be, we do not want a president who disrespects American democracy.”

He went on to say Mr. Trump had “lied” about promises he made in 2016 to working people, including that he would not cut social security.

He also joked that the economy was indeed booming, as Mr. Trump boasts, but only for his “for his billionaire friends.”

And he took a swipe at Michael R. Bloomberg, the multibillionaire former mayor of New York.

“Michael Bloomberg, like anybody else in America, has the right to run for president, but he does not have the right to buy the presidency,” Mr. Sanders said.

But rather than railing against the Democratic Party, as he sometimes does, Mr. Sanders urged unity, though subtly, even as he vowed to “take on the whole, damn 1 percent.”

“We are going to defeat Donald Trump because whatever your political view may be, the people are sick and tired of lies, corruption and fraud.”

Bernie Sanders is in good company.

Around 13 K from 1 estimate

New chant I heard in Las Vegas, an updated classic:

You see it
You feel it
President Bernie!

chuck rocha will be busy in Texas, too.

"unlawfully going through my tweets" 🤭 https://t.co/wwrJM9cUy2

She’s powerful. Wouldn’t be surprised if it wasn’t her who hacked Joy Reid’s blog.

There was a time when I considered whether the Dem Party really wanted me to belong to it.

Time and again I was told the progressive future I wanted was too big, too bold, too soon.

But now I feel seen. This Party is changing for the better.

None of the moderates can beat Bernie. If Warren knocked out, much of her support goes to Bernie. This year, a progressive will be our nominee. It’s Bernie or Warren. https://t.co/QG2w2KozIq

I got some news for Markos. It won’t be Warren.😎😁

Liz is no progressive. When is that line of BS going to stop?

By his standards, she actually is. To ours, not as much.

Bernie Sanders in Houston says he’s won the popular vote in IA, won in NH and as of last night won in NV: “And don’t tell anybody because these folks get very very agitated and nervous — we’re going to win here in Texas and in November we’re going to defeat Trump here in Texas” pic.twitter.com/n2MFUoPnJ8

Bernie Rally in Austin Livestream (to start at 5:10 CT):

The Israeli people have the right to live in peace and security. So do the Palestinian people. I remain concerned about the platform AIPAC provides for leaders who express bigotry and oppose basic Palestinian rights. For that reason I will not attend their conference. 1/2— Bernie Sanders (@BernieSanders) February 23, 2020

As president, I will support the rights of both Israelis and Palestinians and do everything possible to bring peace and security to the region. 2/2— Bernie Sanders (@BernieSanders) February 23, 2020