.@realDonaldTrump, take note. The American people will no longer tolerate a government which only works for the billionaires and massive corporations. We are going to defeat you and create a government that works for all. pic.twitter.com/l5p8zbDkfh

And, Bernie is at a rally for the UTPE-CWA 9119 union that is striking near the UCLA Ronald Reagan Medical Center today. 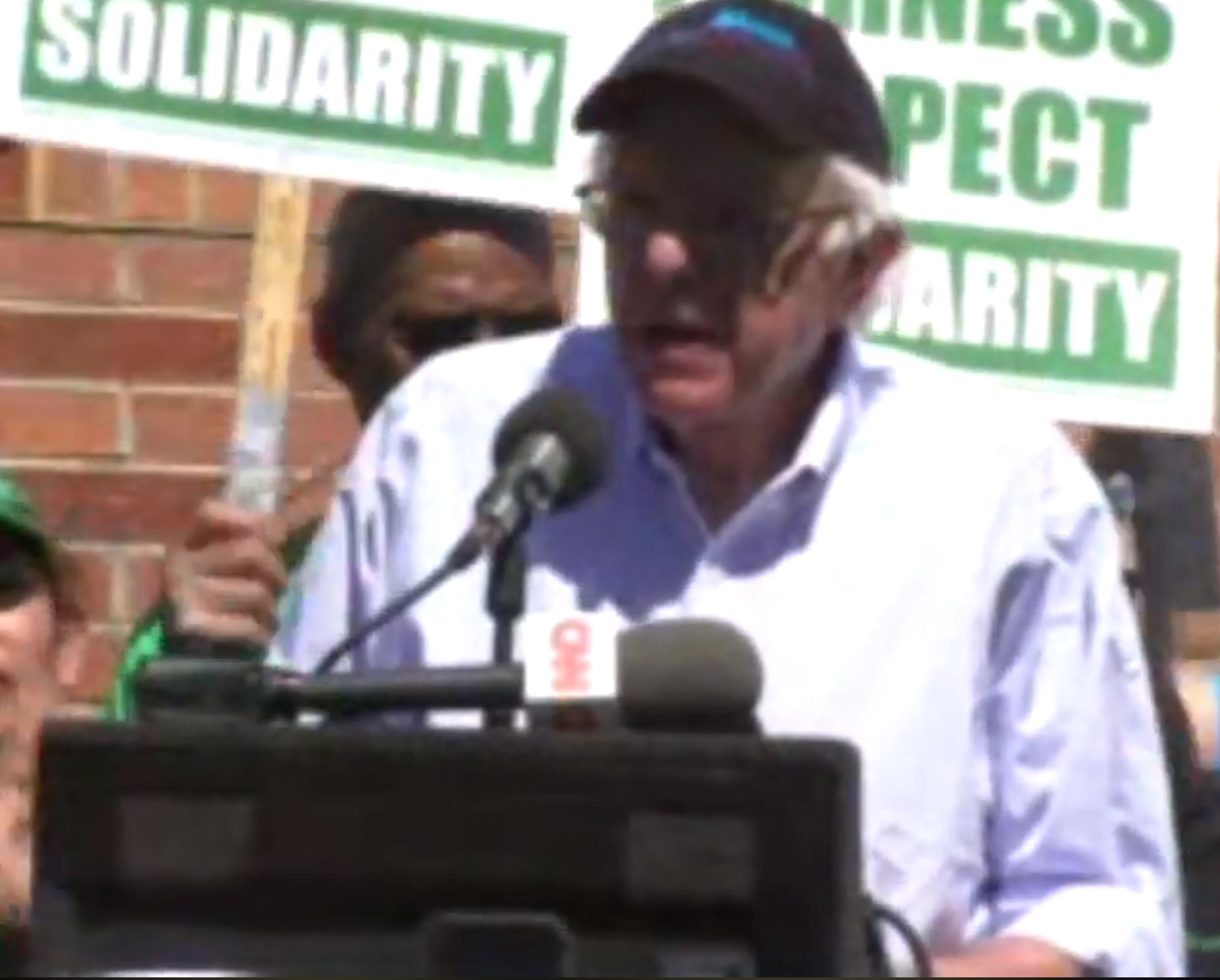 Meantime, chat away in the comments!

UPTE-CWA and AFSCME on strike. What does @BernieSanders do? Get on our comfortable shoes and walk the picket line. pic.twitter.com/x8yRuZ7YSU

In new fundraising email, @BernieSanders campaign takes victory lap on prediction it had more donors in first 24 hours than @BetoORourke did: pic.twitter.com/tSSgSSfdpq

Warren picked the wrong year. Wonder if Hill would’ve kneecapped her, too, or if she’d be President now.

I think that if Liz had thrown her hat in the ring in 2016 (or 2015 more like it) that Bernie wouldn’t have run and that she would have had a legitimate chance to beat Hillary in the primaries.

Of course, the establishment would have been against her..

Chait joins in today’s Bernie bashing. Of course now that he has hired the former Clinton staffer for oppo research, I guess all will be forgiven

Bernie Sanders has tried to assure Democrats he does not intend to run a factional splinter campaign in 2020. To that end, he has promised to endorse the nominee, and pledged he will not run a negative campaign, and to date has followed through on the latter promise. But then yesterday, his campaign announced two high-profile hires: speechwriter David Sirota and press secretary Briahna Joy Gray.

Bernie’s campaign will be ready for all incoming missiles

One of Brody’s coworkers on the Clinton campaign told TPM of the hire: “It’s a really smart move by the Sanders campaign. Tyson literally wrote the book on Bernie’s oppo.”

I’m posting the article here, my apologies if this is a dupe:

Bernie Sanders is preparing for the coming onslaught of attacks by hiring someone who knows the material best. The Vermont senator’s campaign is bringing on a veteran of Hillary Clinton’s research department who helped pull together the former secretary of State’s opposition-research book on Sanders in 2016, according to Democrats familiar with the decision.

“This campaign will comport itself according to the values of Senator Sanders, which means we will not engage in mudslinging or character assassination. That said, one of the reasons we hired Tyson is to prepare this campaign for whatever false accusations and allegations are leveled against us,” Shakir said in a statement. “Most importantly, Tyson’s work on this campaign will help us educate voters about the issues, policies and stances that the Senator has taken over the course of a lifetime fighting for working people.”

Hope it’s a mea culpa and not a sabotage opp

Probably Bernie is paying the best.

I had thought he had happily retired. I remember him at Yearly Kos in 2007. What a riot.

Ive always had a softspot for his presidential campaigns.

Who is this guy? Do we know? If it’s not the real one, Twitter will ban him, right?

If it’s him, I love it! Whoda thunk? 2 Old white guys with the sharpest and most compassionate minds out there.

I sure hope Its the real Gravel

I LOVE him. Hysterical AND great points. Maybe he’ll even make a centrist think twice.

Maybe its these kids running the account
Regardless, its as good as Peter douches

Ok, students who are trying to get Mike Gravel to run, well done on the rollout lmao. https://t.co/tv9lwFDk5U

while his record is nowhere near perfect in a number of aspects he will always have my respect for what he did with the Pentagon papers:

began printing large portions of the Pentagon Papers.[64] The papers were a large collection of secret government documents and studies pertaining to the Vietnam War, of which former Defense Department analyst Daniel Ellsberg had made unauthorized copies and was determined to make public.[65] Ellsberg had for a year and a half approached members of Congress – such as William Fulbright, George McGovern, Charles Mathias, and Pete McCloskey – about publishing the documents, on the grounds that the Speech or Debate Clause of the Constitution would give congressional members immunity from prosecution, but all had refused.[66]Instead, Ellsberg gave the documents to the Times.

The U.S. Justice Department immediately tried to halt publication, on the grounds that the information revealed within the papers harmed the national interest.[65] Within the next two weeks, a federal court injunction halted publication in The Times; The Washington Post and several other newspapers began publishing parts of the documents, with some of them also being halted by injunctions; and the whole matter went to the U.S. Supreme Court for arguments.[65] Looking for an alternate publication mechanism, Ellsberg returned to his idea of having a member of Congress read them, and chose Gravel based on the latter’s efforts against the draft;[6]Gravel agreed where previously others had not. Ellsberg arranged for the papers to be given to Gravel on June 26[6] via an intermediary, Washington Posteditor Ben Bagdikian.[67] Gravel used his counter-intelligence experience to choose a midnight transfer in front of the Mayflower Hotel in the center of Washington.[68]

On the night of June 29, 1971, Gravel attempted to read the papers on the floor of the Senate as part of his filibuster against the draft, but was thwarted when no quorum could be formed.[69] Gravel instead convened a session of the Buildings and Grounds subcommittee that he chaired.[69] He got New York Congressman John Dow to testify that the war had soaked up funding for public buildings, thus making discussion of the war relevant to the committee.[70]He began reading from the papers with the press in attendance,[69] omitting supporting documents that he felt might compromise national security,[71] and declaring, “It is my constitutional obligation to protect the security of the people by fostering the free flow of information absolutely essential to their democratic decision-making.”[71]

He read until 1 a.m., until with tears and sobs he said that he could no longer physically continue,[71] the previous three nights of sleeplessness and fear about the future having taken their toll.[6] Gravel ended the session by, with no other senators present, establishing unanimous consent[70] to insert 4,100 pages of the Papers into the Congressional Record of his subcommittee.

? plus he’s making up for bad votes.

I haven’t verified this info, fyi, but:

Yes its true thats one of the things I do not like about him (there are several others) but at the same time he is great on war/peace & pot. Three very important issues lol. But yes absolutely godawful on pipelines, without him there may not have ever been a Trans-Alaska pipeline that has spawned many more

A new design concept for the #warmingstripes by @alxrdk showing how the stripes could evolve out to 2200, depending on emission choices pic.twitter.com/notGTQ8lS8

I thought it was one of those designer color things. Ha ha

“If I have anything to say about it, and I suspect I will, I will make it easier for unions to have a card check. ” —Bernie at UTPE-CW Rally

Short but sweet. Ended by asking UCLA to sit down and negotiate in good faith.

UPTE-CWA and AFSCME on strike. What does @BernieSanders do? Get on our comfortable shoes and walk the picket line. pic.twitter.com/x8yRuZ7YSU

Rubin doesn’t like Beto either. Second column in three days going after him. I’m curious to how she will react to Biden. She seems to like Warren but as a Never Trumper she is probably in Biden’s camp

O’Rourke is from Texas, is a natural schmoozer and performer, and is lacking definitive solutions to much of anything. He’s more likely to say “We should consider that” or “We should have a conversation about that” than to actually have an answer and tell you what he wants to do. He has been on a city council, served three House terms and lost a Senate race.

The sad reality is that O’Rourke is in a much better position to win the nomination than Warren right now. He’s a perfect fit for the celebrity political era in which we live, has lots of free time to campaign, can raise gobs of money and hasn’t yet to be seen losing a one-on-one confrontation with the president. His main problem is the nagging sensation that there might be no there there.

Maybe this would seem a tad goofy, but it would be no more preposterous than picking a president who entered the race without coming up with a detailed, thoughtful policy agenda for grave national problems. O’Rourke feels the need before giving his answers to hear what everyone has to say. (Any student slacker worth his salt will recognize a good stall and an excuse to peek at others’ answers when he sees one.) He appears to think voters will come up with the ideas rather than look to the professional politician running for president for thoughtful responses to their questions. (When he asks what they think, clever ones might retort, “We should have a debate about that.”)

I would expect her to be holding out for a Biden entry, but if that takes place it may be more of a “flash in the pan” than Harris’ launch.

(I kid the Republicans) https://t.co/BXOIstlpSx

In dirty work trucks like my family’s you’re looking at anti-establishment progressives, cynical non-voters & maybe some centrists. Sweeping generalizations but trust me sparkling big trucks with US flags driven by MAGA caps pulling boats to the lake don’t need a truck for work

'David Sirota in the Guardian has been trashing most of Bernie Sanders's opponents without disclosing his work with Sanders' @isaacdovere in The Atlantic. This is totally untrue. Once David was approached by Sanders he wrote nothing else for us. https://t.co/LPFPWmzfQ6

Good. I’m glad he’s back with the Bernster!

JP Morgan agreed to pay out *$13 billion* over its massive role in mortgage schemes w the ‘08 recession.

So maybe they *aren’t* the best authority on prioritizing economic wellbeing of everyday people & the planet. https://t.co/oLSvrIxPsZ

The war for lack of a better word against Bernie is on, even more once Biden’s in. Our Media AKA as the weapons of mass deception will go all in against Bernie and try to convince anyone that will listen that Bernie’s to extreme to be president and cant beat Trumpcorp.Then theirs Faux news that will chime in with their BS. Its gonna be a long hard fight for us Berners. I expect that corporate America and their paid off Dems to pull every dirty trick possible to prevent Bernie from winning the nomination. Hopefully Bernie can attract the voters that will become eligible voters by 2020 and we will need a majority of them to turnout in a big way. Some polling has the R’s more energized than the D’s. They must not have liked the beating they took last year so their engaged now.

Machines too. Both parties love the new hackables. I wonder why. Even Wyden questioned it.


They are about to hit one of the Hil bot farmers.

The center has dramatically shifted in the Democratic Party on Israel and AIPAC. https://t.co/lfwcIfNg1A

I don’t think we will hear Biden saying that