Last night, TOP had a liveblog going about Anderson Cooper’s Stephanie Clifford interview on 60 Minutes last night. I discovered it on the Recent Story list while looking for the new series, These Revolutionary Times. Also, I found another FP post by GOS himself, who provided a quick transcript from CBS. To me, it is pitiful but TOP is starving for ratings. I’m surprised they didn’t solicit quite the polling that CNN did: 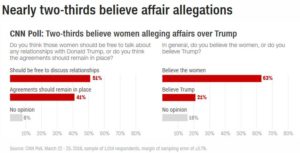 Mind one, I did see the interview when it was being broadcasted last evening. The only thing that was particularly interesting was the timing of the payoff and how it could potentially violate campaign finance laws. And it’s possible that Trump’s campaign may get nicked over it related to Russia.

There were great diaries over at TOP last night. One of them was the new Sunday series, These Revolutionary Times. The topic was Fight for What Is Right. It featured some articles we’ve seen excerpted here but also some other ones that we hadn’t, such as Yes Magazine’s piece on what the Second Amendment means to African-Americans (actually) or discriminatory lending practices in different places. The diarist, Get a Grip, is an activist who sits in on city council meetings and listens to the grind. But it’s very informative what we learn from her and what she reads too. Did this get on the wreck list? Hell no! It’s all about Stormy!

This morning, I watched Democracy Now!. Here were the headlines:

That took 15 minutes–and those were much more informative than what I saw on CNN or other stations in passing today. The rest of the hour was the March for Our Lives speeches by our youth. No one frickin’ politician was allowed up on that stage in DC. Democracy Now! also employed their intern to interview various people who attended the demonstration. If you want to see the show in its entirety, go here. One can see how the DN host, Amy Goodman was inspired, especially by Emma Gonzales, who spoke for 2 minutes, then continued her speech–but in silence for the next 4 minutes. If you haven’t seen it, here it is:

Eleanor Roosevelt and MLK, Jr would have been proud. Eleanor was very interested in the Youth, especially the socialists and the anti-war activists, although she knew eventually the US was likely to have to face a war sooner or later. To me, March for Our Lives channeled some of the demonstrations about the Vietnam War that I used to see on the teevee when I was a kid. Gun violence is very much like a war here in the US. We need to face it now, and we need bold change, not just a couple of bullshit band-aids we got in the spending bill last week. I am with those kids when I hear a familiar refrain: Enough is Enough!

I’m excited that there is a call to action for the citizens to engage their Congress folks for TH’s by April 7th (which is when Congressional recess is over). This tweet by David Hogg was a trender today, as it should be:

To TOP’s credit, they covered the march very well. But then it was back to what Bernie said what the media reports more on which is Stormy Daniels, or Russia. More CNN, WaPo, and MSNBC echos over at TOP.

What was the corporate media discussing while we were talking about inequality in America? Let me guess, Stormy Daniels. pic.twitter.com/g9JH2kWcxW

It blows my mind that Bernie Sanders' online town hall on economic inequality got 1.7 million views, and was super informative, and yet the Stormy Daniels interview got about 21.3 million views, and no-one learned anything they didn't already know.

Yes, CBS got 21.1M viewers for that segment. The best part of 60 Minutes was the story that followed it, The Greek Freak (as he is known to roundball fans), Giannis Antetokounmpo. It was uplifting.

Honestly, I don’t care about Stormy or whomever else Trump may have had illicit affairs with, nor do I care if the women have any credibility with voters, albeit I saw a headline somewhere that R’s do. I do care these women were threatened and that is wrong. But it’s his business along with his missus. I am still waiting for a former Clinton campaign staffer let it slip they knew about this cover-up but the Billy Bush tape was already out there. Sigh.

If I’m going to hear more about Stormy, I’d rather it would be by the Classics IV, Etta James, or the Allman Brothers. I’m posting the Classics IV first.

This serves as my rant but also a place to post videos if you like–we used to have a Monday Night Mixtape. I’m reviving it here.

They call it Stormy Monday….with the Allman Brothers (sans Duane) and Eric Clapton

Miley Cyrus performing one of my favorite tunes, The Climb at the DC event:

Demi Lavato at the DC rally:

(Sorry I don’t know the name of the tune, but I liked it)

Jennifer Hudson’s great cover of the Nobel Laureate’s tune, The Times, They are Changing:

One of the best covers of this classic by Led Zepplin, performed by Heart

Hear, hear! I hope I can figure out how to post tunes. I have no trouble at c99, but I had some fellow tech c99ers helping out. 🙂

Under the YT, click Share. Wait for another box to appear, then copy (ctrl + C) the code (URL in most cases), and paste it on here. LD has the Word Press settings whereby you don’t have to jump through hoops like you do at c99. Pasting tweets is easier here too than at c99.

Another great cover, this one of a famous George Harrison tune, in which this was performed at a tribute to the late Beatle: