“The initial 15-day period of social distancing urged by the federal government expires Monday and Trump had expressed interest in relaxing the national guidelines at least in parts of the country.

But instead he decided to extend them through April 30.” https://t.co/iXcdJYbBUm

Sounds like Trump is listening to the positive responses he’s getting on Faux Snooz. 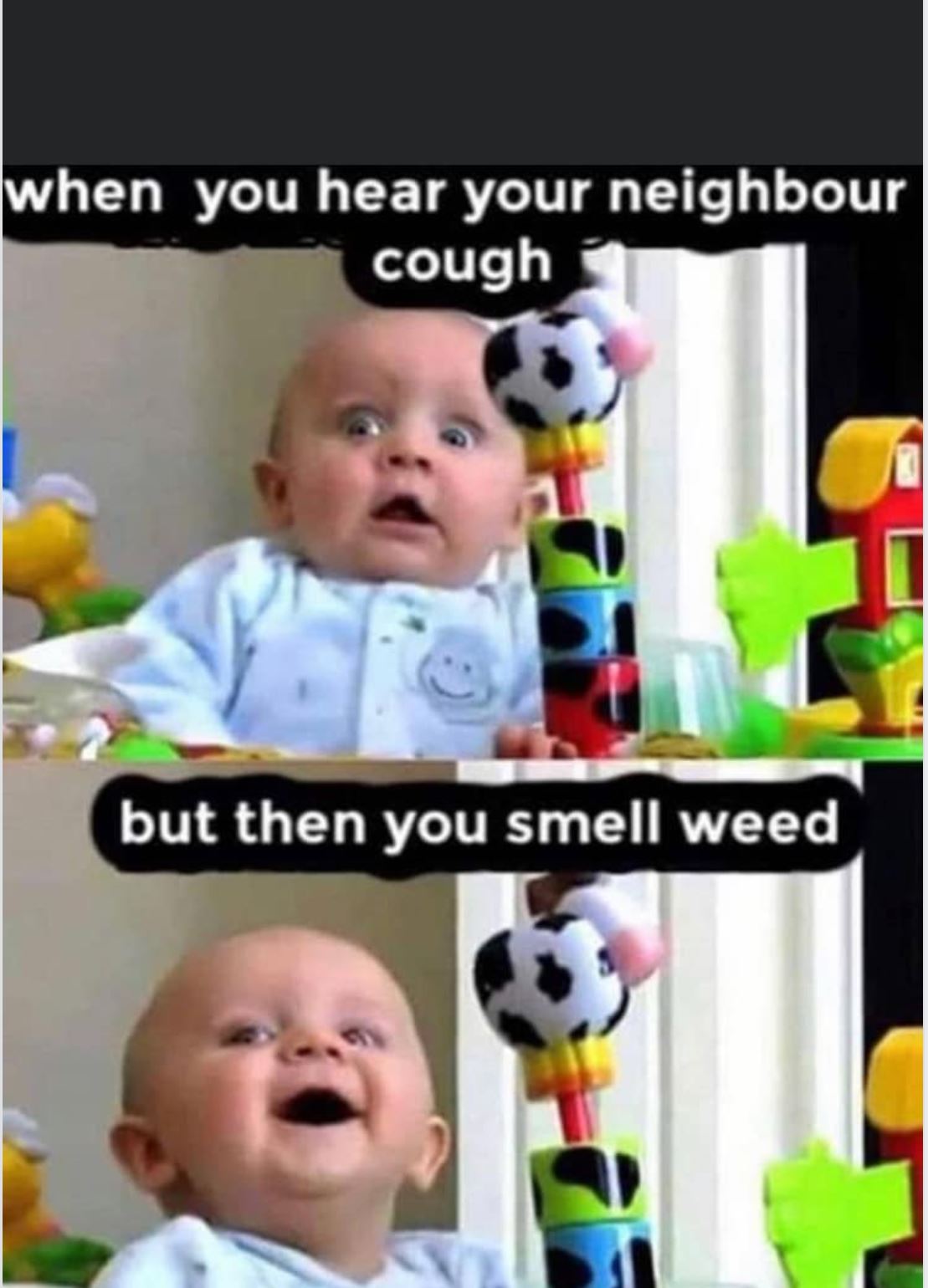 I don’t know if my neighbors’ kids feel that way when I’ve been on my back porch.

On a slightly heavier note:

I hope he gets better soon. Country artist Joe Diffie died from COVID-19 complications today, and he was only 61.

Connect with
I allow to create an account
When you login first time using a Social Login button, we collect your account public profile information shared by Social Login provider, based on your privacy settings. We also get your email address to automatically create an account for you in our website. Once your account is created, you'll be logged-in to this account.
DisagreeAgree
18
30
0
7

Cabin fever…what things have you been doing at home that keep your mental acuity up or creative juices flowing?

I’ll start. I’ve gotten more creative with my leftovers. It’s like Chopped only I can’t make anything in less than 30 min.

Last weekend, I made a big batch of bolognese sauce and served it with pasta. Common dish. I ate it as a soup, without the pasta, since I’m trying to watch my diet during this stay in place edit.

After 2 meals of that, Mr. Benny wanted something else. So I added a can of white beans, some cumin, chili powder, chopped green bell pepper, and turned it into a fusion of Latin/Meditteranean chili, and served it with tortilla chips and sprinkled a little cheese. That made about 3 meals. But still leftovers.

Finally, I got inspired to make chili cheese enchiladas since I had the red sauce, diced chilis, onion, mexican cheese. I prepped the cheese enchiladas then topped it with the leftover chili, and put some slices of pepper jack, and let that bake for 30 min.

Here’s some Joe Diffie, RIP, but his music lives on.

I just pick out a few inside “Honey Do’s to keep busy nothing major but enough to break up the day. Cold rainy weekend but didn’t stop me from grilling out today, but i’m one that grills no matter the temp in WI. Once spring temps hit plenty to do out side!!!

i have a lot to do around here— so busy with zoom meetings and texting that I am either avoiding it or I’m actually too busy. lol

What time is dinner?? That sounds delicious1

Mr. Mags made chili last night and so tonight we are making chili nachos. Yummmmm.

Something that Mr. Mags and I have discussed a lot these days is how the challenges we’ve been having to deal with these past few years have really prepared us for this time.

Our lifestyle has hardly changed at all, because we’ve been hunkered down for years. Not enough in our budget to go out, to movies, to concerts (wahhhh, that one hurts the most!), to restaurants, so the reality has been that little has changed for us.

We love making meals from leftovers.

Stuffed burgers pick your fillings. I’ve got about 5-6 years to go for retirement so cutting back to pay off nagging bills , CC and so on. The only thing we haven’t cut back is going out to eat once or twice a month. Were pretty frugal so we can get by for about $25. We do miss that right now as we usually see people we know or go with another couple. I’m lucky I have a great cook for a wife, we also freeze a lot using one of those vac sealers so were in good shape for this as well. Considering the Mrs. profession we know one of us will catch this and the other will be quarantined at the minimum so were going day to day and the first thing that comes up when were both home is what’s going on with CV-19 at our work places. Right now all is well and that is my hope for all of us that lurk or are regulars here.

I do miss the socializing. We did used to get to do that once in awhile.

Good luck! It’s harder when you or your partner is in the health care profession!

Mr. Benny is the social one of the two of us, and it’s a challenge for him not being able to play pickleball with his friends. They did figure out one day where to play in which you could do so outdoors. But I remind him that they should be wearing gloves!

My oldest friend is a pickleball freak. She is aging beautifully, too. Not me. I stick to daily long walks and my ortho therapy exercise routine. 🙂

next time maybe some beans or lentils, rice

🙂 Leftovers, salads, homemade soups and grilled meats are the kings down here.

Ohhhh, can I come over to your house for leftovers? Hold the hot chilis tho. 🙂

"Private equity eyes industries crippled by coronavirus: ‘They have been waiting for this’" https://t.co/sGKWYaShQ2 #StopWallStreetLooting

The bastards have been sitting on piles of cash for years! I’m sure that they see plenty of opportunities to profi…I mean invest in.

This is when I wish the c-virus was really the Bubonic Plague!

So excited for @iHeartRadio & @FOXTV 's #LivingRoomConcertForAmerica TONIGHT at 9p ET/6p PT ! We'll be raising money for @FeedingAmerica & @1strcf ! Meet you there for some good fun, some great music, & to help each other through. 🥰#TogetherApart #iHeartConcertOnFOX 🔥🎶❤️ pic.twitter.com/9ktehsVnHQ

Been awhile since I heard Boulevard of Broken Dreams. Nice unplugged version by Billie Joe Armstrong of Green Day.

that one is a must for my playlist

Billie Eilish is a great young singer with a terrific set of pipes!

wow one mask for me and my kid. hold your breath honey, mommy need to breath for a minute

They have NO shame.

Alicia Keys is the first artist on the iHeartRadio Living Room concert on fox. As usual, her music is uplifting!

I always enjoy these types of concerts because most of the artists who participate are ones I don’t listen to on a regular basis, so their music seems novel to me, even though I’ve heard bits and pieces of the songs on talent shows.

On Wednesday Feb 26, in front of a packed White House briefing room, President Trump told the country there were only 15 cases of coronavirus in the US, and “within a couple days [it is] going to be down to close to zero.”
Tonight
“he said the country would be doing well if it “can hold” the number of deaths “down to 100,000.” ”It’s a horrible number,” Trump said, but added: “We all together have done a very good job.”

THIS IS HOW WE SURVIVE: Instead of letting Amazon use coronavirus to dominate even more of the economy, the company should be nationalized and reoriented to serve the public good instead of predatory capitalism. https://t.co/VYT4Ytz7L2

Or simply that the RNC or DNC really don’t care as long as you vote for either of the candidates they put forward , that way they keep the corporate fascist empire rolling along. Bernie would upset that gravy train in a yuge way

yeah it’s been all out war on Bernie really ever since 2015. I’m donating some to the causes now because I think that’s like donating to him and people are going to see the millions that we raise for people who are fighting on the front lines of this. Once this goes on a little bit here I am going to write and I hope others do too and ask them to start saving for some really sharp ads have to be the best and they have to be of him being President Sanders to really involve people in what his administration would look like.

I interviewed an Amazon warehouse worker in Staten Island on why he and his coworkers are walking off the job tomorrow. He says he knows about seven confirmed coronavirus cases in his building. “Amazon is a breeding ground,” he says https://t.co/F0KxtbjfCn

have to find somewhere else to get the grandkids Easter and the little one birthday and I better get it done soon! lol

Jane and I are deeply saddened to hear of the passing of State Rep. Isaac Robinson. He served as a vice chair for our campaign in Michigan and believed strongly in a fairer future for all. Our thoughts are with his family and loved ones. pic.twitter.com/uW6xw6YylA

House Minority Leader Chris Greig, D-Farmington Hills, said she spoke with Robinson on Thursday night and he told her he hadn’t been feeling well.

“But he was pretty stubborn,” she said, and didn’t go to the hospital until Sunday. “I spoke with (his mother) Rose Mary tonight and she’s in shock and she told me she believes it was COVID-19.”

Robinson, 44, was a frequent participant in protests over everything from water shutoffs, air quality and working conditions of everyday Detroiters.

About two weeks before his death, Robinson and state Rep. Brenda Carter, D-Pontiac, accompanied by a laid-off casino worker and a Wayne State University student, called on Gov. Gretchen Whitmer to institute a statewide ban on all utility shut-offs and evictions amid the coronavirus outbreak.

“Anytime Isaac spoke, anytime he was working on something, it was with a huge passion and focus on making lives better for Detroiters,” Greig said. “It’s just heartbreaking for our caucus, the city and the state.”

Whitmer said Robinson had “a huge heart, a quick wit, and a genuine passion for the people.”

“He was a fierce advocate for Detroiters and people across Southeast Michigan,” she said in a statement. “He dedicated his career to ensuring justice and security for those he served, and the impact he had on his community will continue to be felt for years to come.”

I’m a @BernieSanders surrogate. You all know that.

But anyone tweeting #NeverBiden is getting played.

Fight for @BernieSanders with all your heart.
Every moment.
Every day.

But if he doesn’t win – #OfCourseBiden.

I’m not there. I’m in the 5% who may that part of the ballot blank. Biden has not persuaded me yet that he would fight against austerity measures. I know Bernie would.

yeah. im a little further. i know the austerity is strong in biden bloomberg et al. they’ll say whatever. imho

“Will you vote for Joe Biden in the general election?”

“Are you or have you ever been sympathetic to the American Communist Party?”