↓
Home→2020 Elections→4/1 Former Comic Relief Co-Founder Berates Bernie Sanders for Being A Democratic Socialist; Is there a POTUS AOC in the Future? Evening OT

The View isn't this combative with white supremacists and war criminals. This is truly embarrassing @WhoopiGoldberg. https://t.co/tZSoKALXa6

Bernie 1, Whoopi zero, The View no longer most-watched show on milquetoast DNC topics. I’m sure Joy will cry about it tomorrow.

In keeping with the earlier thread’s April Fool’s theme, here’s an interesting farcical piece about a POTUS AOC, written by a libertarian. But it’s eerily close to what progressives wish for if we can’t have Bernie as the first democratic socialist POTUS in the 21st century. Perhaps the Daily Kos will fold under Biden as well because they don’t have Trump to kick around. (h/t to TomP, who is on permanent TO at TOP)

A column from 2025, when President Alexandria Ocasio-Cortez takes office

WASHINGTON, Jan. 20, 2025 — President-elect Alexandria Ocasio-Cortez’s rise to the top has been as rapid as it once seemed improbable. But the New York Democrat’s inauguration today should remind all of us how quickly political paradigms fall when political elites fail.

In hindsight, the failures that brought the first socialist president to power seem obvious. The rapid collapse of the Soviet Union in the early 1990s made the United States the world’s only superpower. Presidents from both parties used that power to usher in a regime of global neoliberal economics backed by U.S. military power. As the Greek historian Thucydides wrote two millennia ago, the strong do what they can while the weak do what they must. The rest of the world fell into line, and the 21st century was born.

Cracks in the edifice soon appeared. The United States could conquer countries such as Iraq and Afghanistan, but it lacked the will and the means to hold them. Insurgencies in both countries cost trillions of dollars without bringing victory. At the same time, vast swaths of the U.S. homeland were falling apart, hollowed out as firm after firm left communities small and large to invest elsewhere. America’s house still had curb appeal, as witnessed by the large numbers of migrants streaming to get in. But the foundations were slowly subsiding.

The financial collapse of 2008 was the first clear sign of endemic failure. No elites saw it coming, and its arrival was clearly the result of failed policies that encouraged finance and housing to spur economic growth. It took trillions of dollars in bailouts to prevent a second Great Depression, but little of that money went directly to the people whose lives were upended the most. Banks were saved, but neighborhoods were lost. Recovery was slow when it came, and popular resentment grew. Twin populist challenges in 2016 — Bernie Sanders among Democrats and Donald Trump among Republicans — was the result, culminating in Trump’s shocking election.

Trump proved incapable of leading the reform movement he birthed. A divisive, unserious man, his administration lurched between trying to remake the global neoliberal order and enacting the standard Republican economic agenda. When the coronavirus pandemic hit, he did what he had always done in office: gyrate wildly between populist bluster and meek submission to elite advice. In the end, that meant he held his future hostage to the very swamp he said he would drain.

Those elites said they could put the economy into an induced coma and restart it with massive injections of cash. But they were wrong. There was no V-shaped recovery. Instead, the country remained mired in depression on Election Day. Joe Biden’s landslide victory swept Democrats into power.

But the 78-year-old Biden was not up to the task. He had always been a man of consensus and restoration, not vision and boldness. Like Herbert Hoover after the crash of 1929, Biden sought to preserve a system with half-measures rather than embrace dramatic reform. The economy did not fall, but it also did not rise. After three years of misery, Americans had seen enough.

The 2022 midterms sealed Biden’s fate and foreshadowed Ocasio-Cortez’s rise. Her successful primary challenge of another septuagenarian Democratic establishment paragon, Sen. Charles E. Schumer of New York, made her the heir to Sanders’s progressive army. Many other Democratic establishment figures lost their primaries to progressive challengers, shifting the party’s gravity sharply to the left.

Democrats kept power, however, because of Republican weakness. They were hindered both by Trump’s divisive legacy and their leading role in crafting the failed bailout strategy. They were also fatally hobbled by their own internal civil war. The dominant faction thought the current crisis was a rerun of the 1970s experience with stagflation, and thus sought to fight the depression by cutting taxes and spending and expanding global trade. But saying neoliberalism hadn’t gone far enough was not what most Americans wanted to hear.

Ocasio-Cortez easily defeated Biden in the Democratic primaries as he looked as feeble as his policies. Republicans, meanwhile, put up their own woman of color, former U.N. Ambassador Nikki Haley. But she failed to catch on as party orthodoxy prevented her from assuming the mantle of change Americans desperately wanted. Ocasio-Cortez’s extreme youth — she only turned 35, the constitutional minimum age to become president, in October of 2024 — also helped her. This new leader was clearly untainted by discredited old policies she had always loudly opposed.

The new president has long been known by her initials, AOC. Perhaps not coincidentally, that places her in the long line of Democratic presidents also known by their initials: FDR, JFK and LBJ. As the first woman, the first Latina and the first socialist to become president, no one doubts that she will seek to transform the United States more dramatically than any of her predecessors dared to attempt. 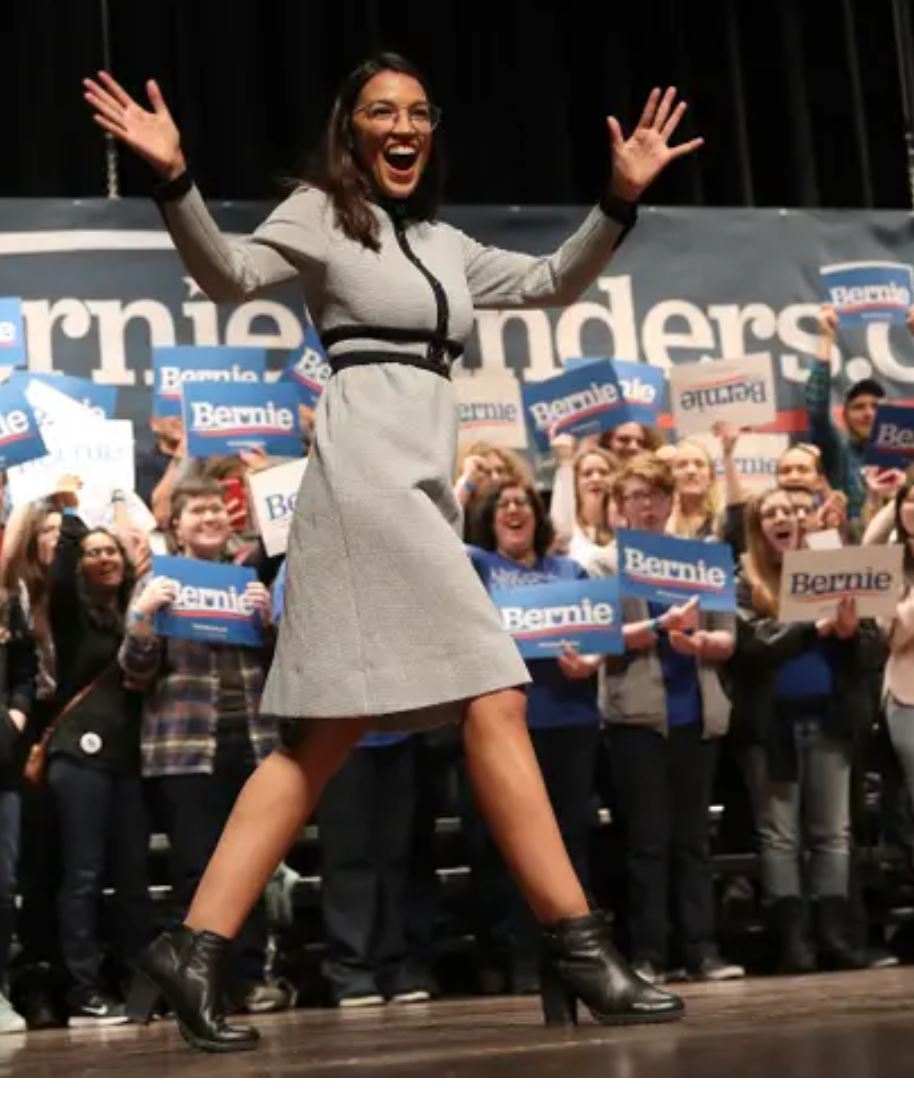 This unfortunately is not a joke. They are nominated as FDA: future Darwin Awardees.

More tweets, videos, and jibber-jabber in the comments.

Bar is open. This serves as an Open Thread.

Never seen a single person who is “passionate” about Biden.

There are a lot of people who have an irrational, toxic, hatred of Bernie. Lots of them are settling for Biden (many because they’ve been told to eat their dog food by Dem elites). https://t.co/cqhMPC9uI2

3/4 He inspires me everyday and, in my opinion, is far and away our very best option to defeat Trump. You don’t have to agree, but please allow me to fight 4 him. I don’t say anything disparaging about Biden. I just believe in Bernie. So I ask that you allow me this expression.

…maybe not with gusto. That was overstating..

Another day, another CONFUSING Joe Biden interview on MSNBC

This is a looming disaster for November, folks. https://t.co/LpkTthY1XH

“Sanders can advance his leftist agenda now because of Biden’s weakness, which is his inability to withstand Sanders’s policies. Case in point: Democrats’ March 16 debate saw Biden dramatically up his ante on free college, going from two years to four for some families.” https://t.co/jWjf4kzJkI

He does there, doesn’t he?

When I refer to a broken system this is my point. We have people without drinkable water in america, so many homeless and people dying from a terrible healthcare system. Yet, can you explain to me how a man spend 900 million to lose but wont help those he sought votes from? pic.twitter.com/DEbmwn4k0y

It’s a good idea by some center-left Dems.

Let me applaud the leadership and foresight of @ewarren and @AyannaPressley and others who urged @SecAzar on Friday to direct HHS to work w/ states, municipalities + private labs to collect + release racial data. Let’s urge our local health officials too. https://t.co/dnoQxlafrR

The Wisconsin Democratic Party has called for postponing Tuesday’s presidential primary and other elections in the state amid the coronavirus outbreak, splitting with Democratic Gov. Tony Evers.

“The Democratic Party of Wisconsin endorses the call by civil rights groups and mayors across Wisconsin to postpone our April 7 election and remove barriers to safe voting by mail,” Ben Wikler, the party chair, said in a statement on Wednesday.

Additionally, a lawyer representing both the Wisconsin state party and the Democratic National Committee said during a court hearing Wednesday that both groups would support pushing back the election during the public health crisis, if the court decides to do so.

The coronavirus has upended one of the only presidential elections still scheduled to take place in April, leading to a shortage of poll workers and concerns about voting in person. U.S. District Judge William Conley heard a consolidated lawsuit from several different groups seeking coronavirus-related changes to Wisconsin’s upcoming vote, from postponing the election to loosening requirements around absentee balloting.

Evers and other elected leaders in the state have balked at postponing Wisconsin’s presidential primary, which is happening at the same time as major state and local general elections, even as Evers asked the federal government to issue a major disaster declaration for the entire state over coronavirus.

The DNC and the Wisconsin Democratic Party’s lawyer argued primarily about absentee requirements.

Conley seemed hesitant to postpone the election, in part because he thought it might be beyond his jurisdiction. “I don’t know if that’s my place,” Conley said during his questioning of Meagan Wolfe, the administrator of the Wisconsin Elections Commission.

But Conley noted that he personally did not believe it was a good idea to hold the election. “The state of Wisconsin is ignoring that [public health] data and endangering its population,” the judge said at one point.

Conley seemed much more willing to entertain extending the absentee ballot postmark deadline. He said he would issue an order as soon as possible.

Great news that he can extend the deadline himself!

Sens. Bernie Sanders, Chuck Schumer and Ron Wyden are urging the Labor Department to do “everything possible” to expedite unemployment benefits.

The senators wrote a letter detailing the economic fallout of the coronavirus pandemic and asking how the department plans to assist the 3.3 million Americans who filed for unemployment last week.

They say they want answers from the Labor Department before April 3.

Now that the U.S. airline industry has secured tens of billions of dollars in financial relief from the federal government, nine U.S. Senators, including California’s Kamala Harris and Democratic presidential candidate Bernie Sanders – have sent major carriers a letter warning them to provide full cash refunds to customers when flights are canceled, instead of offering them vouchers or credits good for future travel.

They also criticized airlines for gouging U.S. citizens desperate to return home from overseas by charging them exorbitant fares during the coronavirus crisis

They will to a certain extent, but most of the refund is the taxes you paid and a few cents. They will honor another flight but the problem is one does not know how long the plague will continue.

.@AOC & @SamelysLópez first met at a nail salon converted into an overlit field office for the 2016 Sanders campaign. By next year, they could both be representing the Bronx in Congress https://t.co/vDCt3vqML2

The cruelty and absurdity of our for-profit health care system is more obvious in the midst of this crisis than it has ever been. The American people want Medicare for All. https://t.co/cgsW1x8s8M

The way its going here, that phrase Objects are closer than they appear to be applies :). Walker destroyed a lot of evidence while he was in office to keep him out of jail, then the WSSC ruled in his favor a lot. Bible belt mentality up here– I attend off and on much to the Mrs chagrin, its the only place I go where i’m still young… these ole boomers leave religion at the door when they leave as they’ll vote for trumpcorp or Byedone both with sexual assaults’ against them and it doesn’t bother their religious morals one bit. My sister in law is a prime example she goes “men do that all the time”

I honestly did not realize how powerful Media is until this year. Years and years of having consumer ideals repeated over and over have rotted our brains.

proud of this one. please take a listen. https://t.co/VgOFiB4T7g