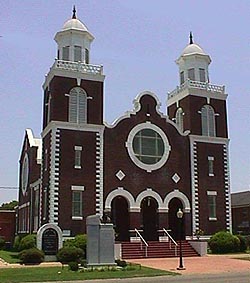 Last year, the Benny family went on our own “Freedom Trail” journey in Alabama, whereby we went to Selma to visit the site of where the march started, at Brown Chapel AME, where there was a bombing, and we drove over the Edmund Pettus Bridge towards Montgomery. In Montgomery, we visited the church where Dr. King spoke and got a tour. The tour guide was excellent, made it more interactive by having couples and pairing up folks from an all-white high school student group that was visiting, by getting up and saying “How Long, Not Long!”, taken from a speech Dr. King had delivered in that church. At the conclusion of the tour, the tour guide arranged the group to form a circle, asked one of the students to provide a prayer, followed by singing “We Shall Overcome”. Poignant in watching those young people’s faces, even I got a little misty-eyed.

We also went to Memphis to visit the Civil Rights museum. We were there about 4 hours. Lines were long but worth the visit as the museum presents an elegant but sometimes uncomfortable examination of slavery in the US as well as the progress made and regressions thereof from the Civil War. The last part of the museum is going through MLK’s room at the Lorraine Motel, and of course, there weren’t too many dry eyes on those leaving that exhibit.

2 weeks ago I visited the National Civil Rights museum site in Memphis. The preservation of the hotel and cars has a powerful frozen in time effect. #MLK50 pic.twitter.com/Atr3Cg1Mxl

"Dr. King was many things, but most of all, he was of the understanding that we are all of a common human race" – @SenSanders at the #IAm2018 rally. pic.twitter.com/10e5qofbPJ

Last night, I watched “King in the Wilderness”, the HBO documentary that Democracy Now promoted at Sundance Fest and today by interviewing veteran filmmakers Peter Kunhardt. To read a review of the documentary, go here. I agree with most of the review, which was very favorable. The film has hours of interviews of people who worked with Dr. King on a daily or monthly basis. One of them was Harry Belafonte, whom as you know was a supporter for Bernie Sanders’ candidacy in 2016.

In turning our eyes back to today, Philip Lederer, a doctor who works in poor clinics, wrote this in Common Dreams yesterday:

Woke Up This Morning With My Mind Stayed on Freedom

And American society is desperately ill. How else can we consider the sickness of our nation’s spirit, where people would rather sell guns than provide health care and education to our children?

As a practicing physician with a focus on health of the poor, the fiftieth anniversary of the murder of Reverend Dr. Martin Luther King Jr is particularly poignant for me.

Dr. King was assassinated just as he was building a fusion movement, a Poor People’s Campaign and a new “Freedom Church of the Poor.” The movement was making connections between militarism, racism, and economic exploitation, and Dr. King was calling for a revolution against the structures that kept people in poverty.

If Dr. King were alive today, a half-century later, the question is what he would be saying and doing.

He would be critiquing an immoral economy which spends trillions on war and nuclear weapons but can’t find the resources to fund health and education— addiction treatment, health care for pregnant women, pre-kindergarten programs, and our public schools, parks, and libraries.
In my opinion, he would be decrying the recent Tax Cuts and Jobs Act which will threaten our children, as government spending for Medicaid and food stamps are slashed.

He would be critiquing an immoral economy which spends trillions on war and nuclear weapons but can’t find the resources to fund health and education— addiction treatment, health care for pregnant women, pre-kindergarten programs, and our public schools, parks, and libraries.

A half-century later, Dr. King would be leading the new Poor People’s Campaign—a National Call for a Moral Revival. He would be demanding a change in course, that politicians uphold the oath that they have taken to represent us on a moral agenda that lifts up the common good. And he would be leading nonviolent civil disobedience to insist that politicians develop serious proposals to address such an agenda.

If Dr. King were alive, he would also be engaging youth— who are already energized by the March for Our Lives— in the Poor People’s Campaign.

Just as the children of Birmingham mobilized to protest Bull Connor and his fire hoses and police dogs, America’s children are waking up and fighting for their survival in 2018.

But we don’t need a commemoration of the murder of Dr. King, we need a resurrection of his movement.

Bernie Sanders spoke at the I’m a Man rally this morning. A tweet about his remarks:

Martin Luther King Jr. was a nonviolent revolutionary. It is up to us to follow in his footsteps and carry forth his mission to abolish racism and poverty. #MLK50 #IAM2018 pic.twitter.com/fj3zu1cO8U

The school teachers in Oklahoma, Kentucky, and West Virginia all have courage in standing up for economic justice. The Oklahoma teachers are marching 123 miles from Tulsa to Oklahoma City for better wages, buildings, and equipment/books/libraries/supplies to bring education into the 21st century:

Leaning over the overpass going under the Oklahoma State Capitol Complex, a group of a dozen women in rain jackets hold signs as oil tankers pass under, honking their horns in support for the striking teachers.

“It’s like the Arab spring, but it’s a teacher spring,” geography teacher Toni Henson said, smiling as thousands of teachers march past picketing the Oklahoma state capitol and calling for higher wages and funding for schools.

The protest takes to the street Wednesday as hundreds of teachers will begin a 110-mile march from Tulsa to Oklahoma City stopping at closed down schools along the route to rest. Teachers in Kentucky have gone out on strike too and Arizona may be next.

Seems fitting that we still honor Dr. King’s work by having a separate thread.

You can watch a livestream of the commemoration of Dr. King’s death at the Civil Rights museum here: http://wreg.com/2018/04/04/live-a-day-of-remembrance-at-national-civil-rights-museum-on-anniversary-of-kings-death/ (those on phones and tablets need to go to FB for better viewing there)

In King in the Wilderness, there were pictures of Jackie Kennedy and Coretta Scott King, meeting shortly before the funeral. As a child, I remember from TV seeing that image, as well as the procession of the casket in a trailer drawn by two mules through the crowds in Atlanta. That made quite an impression on me.

I also remember we had curfews at 9:00 at the time, although little happened in Lubbock.

Shout Factory TV have a concert & documentary that are very good.

On April 4, 1968, the leader of the nonviolent resistance movement, Martin Luther King, was assassinated in Memphis. On April 5, 1968, James Brown sang, and the city of Boston didn’t burn down. This film tells the story of the pivotal role that James Brown—and that particular James Brown concert—played in the political, social and cultural history of the country, focusing on 1968, a defining year for America. Using actual performance footage and the personal recollections of James Brown’s band members, friends like activist Reverend Al Sharpton, personal manager Charles Bobbitt, Princeton University Professor Dr. Cornel West, Boston citizens, those who attended the concert, politicians (such as former Boston Mayor Kevin White) and Newsweek’s David Gates, The Night James Brown Saved Boston tells the compelling story of an artist at the absolute peak of his powers using his artistry for the greater good.

The concert, “featuring Jimmy Brown and his band.”

The Apollo Theatre in Harlem was purposely quiet in respect.

.@common is electrifying the #IAmAMan rally in #Memphis for #MLK50. pic.twitter.com/w9DwNCao7f

The newly unveiled #IAMaMan Plaza at the Clayborn Temple where workers organized the Memphis Sanitation Strike in 1968. #MLK50 pic.twitter.com/S5ZTFpQe4c

Senator Bernie Sanders talks with Parkland Survivor Mei-Ling Ho-Shing and students at FAMU in the green before taking the stage at the I AM 2018 rally. pic.twitter.com/XRkkGlpmjn

Same scene from a different angle.

Hearing what’s on the minds of young people in Memphis before we march for #MLK50. pic.twitter.com/51fpJg89Js

"This is not time for a party, it is time for a political revolution" @RevDrBarber #PoorPeoplesCampaign #IAM2018 #MLK50 pic.twitter.com/cJafIxkUPe

At a time when income inequality is the highest it’s ever been, I believe we are on the verge of another great awakening. The awakening is spurred by people who have been left behind by economic injustice, and it’s time for our elected leaders to hear the pleas of the people. As history would teach us, struggles for justice rarely end, they just evolve. Dr. King had a dream, but clearly we are a nation still dreaming. He dreamed of a day when our sons and daughters would be judged by the content of their character rather than the color of their skin. We dream of a day where elected leaders see the humanity of all people regardless of the color of their skin or the zeroes in their bank accounts.

While he dreamed, Dr. King also took action. He wasn’t passively hoping for progress, he was working to make his dream of racial and economic justice a reality. We are obligated to continue the work. Dr. King and others gave the ultimate sacrifice. Our sacrifice is time and energy. Everyone can do something. We can run for office, we can organize in our local communities, we can push for progressive policies and we can challenge our elected leaders to continue pushing this nation to live up to our foundational creed; “all men are created equal and are endowed by their creator with certain unalienable rights, that among these are life, liberty, and the pursuit of happiness.” Our collective obligation is to take his memory and continue working to move our nation and world forward.

Anything less is betrayal.

Video of Barack Obama interviewing John Lewis about Dr. King and where Lewis was when King was assassinated:

Shame PBO is a YUPPIE.

Jesse Jackson:How Dr. King Lived Is Why He Died

Dr. King’s spirit has been our moral guidepost for 50 years. That spirit is alive today with the high school students of Parkland, Fla., as they push the country toward sensible gun control. It is alive with the teachers of West Virginia, who have blazed a trail for other workers. It is alive with Black Lives Matter, the Dreamers, Colin Kaepernick and thousands of African-American voters who defied the pundits and sent an Alabama Democrat to the Senate for the first time in a generation. It is alive with the Rev. William Barber as he resurrects Dr. King’s last crusade, the Poor People’s Campaign.

Dr. King bequeathed African-Americans the will to resist and the right to vote. Yet while we were marching and winning, the powers of reaction were regrouping, preparing a counterrevolution. Five decades ago, a segregationist governor, George Wallace, peddled hate and division in reaction to the civil rights movement. Today, it is the president himself who is inciting anguish, bigotry and fear.

We are in a battle for the soul of America, and it’s not enough to admire Dr. King. To admire him is to reduce him to a mere celebrity. It requires no commitment, no action. Those who value justice and equality must have the will and courage to follow him. They must be ready to sacrifice.

Bernie is live on FB, participating in the march:

Walk into a BBQ joint in Memphis for lunch. This happens pic.twitter.com/cILBpi5flI

It’s a nice picture, but my reason for liking it is more about the photo of another famous King on the wall of the restaurant. (I can’t recall if this is Central BBQ or not, probably not).