Today is just bonkers in politics, and the evening with waiting for polls to close for the governor’s race in Virginia between Ralph Northam and Tom Perriello.  As the Birdies know, Our Revolution, John Podesta and Bernie Sanders have endorsed Tom Perriello. 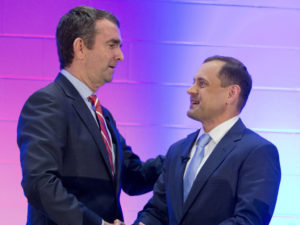 FivethirtyEight has the latest polls (graphic is by them): 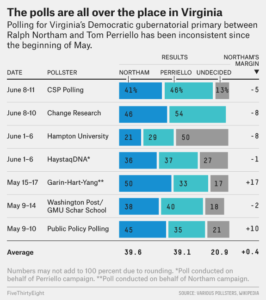 In other words, it’s close.

If the Virginia primary is splitting the Democratic Party, it’s along a state vs. national fault line.2 Northam has the backing of most local politicians, including Gov. Terry McAuliffe and Sen. Tim Kaine. Perriello has endorsements from bigwigs in the national Democratic Party such as former Clinton campaign Chairman John Podesta and Sanders.

The bottom line is that the outcome in today’s Democratic primary will likely tell more about local Virginia politics than anything about the Trump administration or the nation as a whole.

Update: Humphrey has located the link to the NYT site to find primary results.

In other news, the DNC Election Fraud plaintiffs attorneys Beck & Lee held a livestream about an hour ago.

More disturbing things have happened in the past couple of weeks.

More news in the comments section.

45 minutes left to get in line to vote!There's too much at stake to sit this one out. Grab a friend, head to the polls, take action today. pic.twitter.com/rZEouqUqb0

In his public testimony before the Senate Intelligence Committee this afternoon,

Attorney General Jeff Sessions provided new details about his recusal from the Russia investigation. He said that he did not recuse himself because he may be a subject of the investigation; instead, he said Justice Department regulations demanded his recusal because of his prior relationship with the Trump campaign.

Sessions’s recusal — his justification for it, and the scope of how he defines it — is central to the integrity of the FBI’s investigation into Russian interference in our election, and possible Trump campaign collusion with it. That’s because Sessions was at the center of advising the Trump campaign on national security issues during the campaign and has failed to be forthcoming about how that role might have blended with his communications with Russian officials throughout. This raises questions as to how impartially he can exercise his role as the nation’s chief law enforcement officer and whether he may still be in a position to influence the Russia probe.

Sessions’s testimony, though, failed to put to rest any doubts Senate investigators, or the public, have about many of the matters relating to his recusal, and whether he is adhering to it. In fact, Sessions only raised new and potentially damaging questions about his actions and cast doubt on his own truthfulness about what the recusal entails.

Since it came to light Sessions misled during his testimony in front of the Senate, I have called on him to resign.

Workers for government contractor DynCorp International conspired to bilk the State Department out of millions of dollars, according to a federal investigation in Virginia.

The criminal charges come as DynCorp faces an unrelated civil suit by the Justice Department in the District of Columbia that contends that the company allowed a subcontractor to charge excessive rates. DynCorp has denied wrongdoing, saying it stopped working with that subcontractor “many years ago.”

Both cases involve the training of civilian police officers in Iraq. A 2010 report from the State Department’s special inspector general for Iraq’s reconstruction found that oversight of Dyncorp’s police training contract was, and for years had been, weak.

One defendant pleaded guilty in federal court in Alexandria, along with two relatives who lied to cover up his crime. Another alleged co-conspirator is headed for trial, and another is being extradited from Europe.

Federal authorities allege that the convicted man, Wesley Struble, who most recently lived in the Philippines, knew his co-defendants, Emil Popescu and Jose Rivera, from the world of Iraqi contracting.

Popsecu and Struble were working in 2011 at a company that leased a camp from an Iraqi firm for $124,000 a month. Together, according to prosecutors, they concocted a plan to get DynCorp to lease the camp for more than five times that amount.

It’s noteworthy as guess who was in charge of the State Department then. Yep, the baroness. I’d like to see what the Intercept finds, if anything else, and whether or not the DOJ will follow through on this lawsuit. We know the MIC.

As we await the first results from VA, I took a look at the Blue Virginia blog, which had some reporting of turnout. It appears to be up–especially so in Perreillo strongholds of Charlottesville and SW VA

You can track the results here:

Still early, but this link is great! Thanks!

Unfotunately, not looking good for Perreillo–losing 57-43 with almost a third of the precincts in. Looks like Northam’s money advantage and VA Dem machine advantage was too much to overcome. Disappointing, Northam actually seemed to ape most of Perreillo’s positions so to the voters there probably really didn’t seem that much difference between them

Mirrors a little of the Clinton-Bernie shootout there. Perriello in rural areas, Northam in establishment Alexandria.

However, on the GOP, Ed Gillespie is expected to win. It will be interesting to see if Northam runs to the right.

It certainly would be nice to win one of these contests for a change.

I think Nina would agree. She said it was important to right, but we also need to win “damn elections.”

Definitely. It seems like anyone I donate to loses! Maybe Perreillo can run for Congress in his old district. Based on the results tonight, he’s popular there

Independent Vermont Sen. Bernie Sanders warned the United States is facing “enormously dangerous times” and is on a path to authoritarianism and oligarchy during an interview the International Business Times published Monday.

“Look, these are enormously dangerous times for this country,” Sanders said.”We are drifting toward authoritarianism, we are seeing 43 million people living in poverty, we’re seeing this nation move toward an oligarchic form of society where a handful of billionaires control our economy and our political life.”

The self-described democratic socialist made many of the same points he made during the 2016 presidential campaign, critiquing capitalism and saying he believes health care, education and housing are basic human rights, regardless of someone’s income level.

He took issue with the values of America’s current capitalist system saying it teaches people the most important thing in life is “to make as much money as you possibly can.”

“So somebody like Donald Trump becomes the example of what we are striving for,” Sanders said. “Here’s a guy who has been involved in 3,500 lawsuits in his business life. He lies all the time, but he is a multi-billionaire and this is the kind of mentality and character that we should be approving of. I don’t accept that. I think that being a good human being doesn’t mean stepping on other people in order to get rich.”

This doesn’t bode well for our Twitter-er-in-chief

The Commander in Chief can block @VoteVets, the voice of 500k military veterans and families, but we will NOT be silenced. pic.twitter.com/SaCN5hKU9R

In the lead up to the failed Senate vote to block Saudi arms sale Rand Paul tweeted this.

We must stand up and tell Saudi Arabia ENOUGH. They are the biggest exporter of extremism and hatred in the world.

I don't think we should sell arms to Saudi Arabia if it might wind up in the hands of ISIS and if they punish people for protests… pic.twitter.com/JP1VV1zWRz

Yet 5 Democrats sided with the Republicans to maintain the sale.

Naomi Klein on Democracy Now, about the Intersection of politics and Bernie

JUAN GONZÁLEZ: That was Jeremy Corbyn speaking. I wanted to ask you — in No Is Not Enough, you also raise some criticisms of why Bernie Sanders was not more successful during the primary campaign. And you raise the issue that some people claim that Hillary Clinton rode identity politics, as well as the machinations of the Democratic Party, to be able to persevere against him, in that was an issue of identity politics versus class politics. But you raise some criticism on that. I’m wondering if you could expand on that.

NAOMI KLEIN: Yeah, I mean, and I endorsed Bernie and support him. I think he’s a tremendously important voice, and I’m so grateful to him. But I don’t think we, you know, do ourselves a service on the progressive side of the political spectrum — you know, those of us who do believe it is a moment for deep change as opposed to these little sort of tinkering changes — to not engage in self-criticism in this moment. I mean, I am sort of disheartened by the extent to which some of this debate is still frozen as if we are still in the primary, and you still have people in their hard, you know, “Bernie would have won” camps, and you still have Hillary supporters refighting and blaming Bernie supporters for Hillary’s defeat. And it’s just like we have to get out of that debate.

And I think on — among the people who did support Bernie, like the many thousands of people who were at the People’s Summit, I think it’s very important to understand why Bernie wasn’t able to go all the way, right? I mean, he got 13 million votes. He took 22 states. He got closer than any candidate who described himself as a democratic socialist, his campaign as a political revolution. I mean, it was incredible. But I don’t think Bernie lost the primary because the Democratic base is too conservative for Bernie. I think he lost the primary because he was not able to connect with, to speak to enough black and Latino voters, who tend to be more progressive than the rest of the Democratic base, and also to older women, who felt that their issues were too much of an add-on or sort of tacked on.

So, you know, I think, frankly, the best quote in my book is from Michelle Alexander, the author of The New Jim Crow, just a wonderful author and theorist and activist. And, you know, she said to me that if the progressives cannot do a better job of connecting with black voters, of understanding the role of race in American history and telling that story differently, she said, “They better get Elon Musk on speed dial, because they’re going to need another planet.” And so, I think we — and one of the things that I found really inspiring about the People’s Summit was I think that critique was really embedded in the way the weekend was organized, I mean, beginning with the voices of organizers of color, the Million Hoodies Movement. We heard from the chairs of the Women’s March, including Linda Sarsour, on the opening night, speaking explicitly about the need for a deeply intersectional politic, to use Kimberlé Crenshaw’s very important framing, and saying, “No, this is not — this is not a competition between class and economics and so-called identity politics. It is deeply interconnected, and we can’t understand the story of the United States and what this economy is without understanding how race has been used systematically as a wedge to divide and enforce this brutal economic system.”

I’ve started her book. I bought it at the Summit, knowing it was been released first there, but her book signing was the next day, right before Bernie’s speech. So I opted to go with the repast offered, as well as recharging the phone as well as my “batteries”, so to speak. Maybe she’ll become a usual suspect and I can get her to sign it next year if she is on a panel for PS 2018!

Jeremy Corbin’s first appearance in Parliament since the election.

This could come in handy for future references.

This site will give you all of the Senate roll calls this session: https://t.co/uPYNkq15Q1