Skip to toolbar
↓
Home→Bernie Sanders→6/6 The PS is Coming to the Toddlin’ town, Your Questions for Bernie!

The PS…what does that stand for?  The People’s Summit, and it starts on Friday, June 9th. 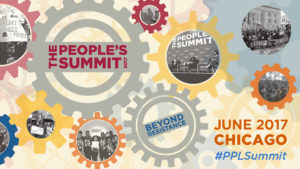 There are dozens of sessions both for training and inspiration, ranging from “Building a Movement that Will Win” to “From Knowledge to Action ” (panel includes Amy Goodman, Danny Glover, and Noami Klein–who also has a new book for signing), “Media, Our Movement and The Political Revolution” (that panel includes Glenn Greenwald from the Intercept, David Sirota (International Business Times), and Beyond Neo-Liberalism and Trumpism (with Thomas Frank, who also will have a book signing).   There’s a session on “Transforming the Democratic Party”, and Rob Quist will be on that panel.

The plenary session is Saturday night, with Bernie, followed by a group of artists who are doing a session called “The People Speak”.

Sen. Bernie Sanders will keynote a major gathering of several thousand progressive activists from across the U.S. in Chicago June 9 to 11 under a thematic of moving beyond resistance to building a broad people’s movement for a just world. The People’s Summit will bring together grassroots activists and leaders of key progressive organizations to chart strategies and build unity in calling for promoting a progressive vision that moves beyond resistance and protests.

Actors and musicians will perform “The People Speak,” Saturday evening, June 10 at the Arie Crown Theater in McCormick Place at 8:30 p.m. following the keynote speech by Sen. Sanders.

“The People Speak” is intended to bring to life the extraordinary history of ordinary people who built the movements that made the United States what it is today, ending slavery and Jim Crow, protesting war and the genocide of Native Americans, creating unions and the eight hour work day, advancing women’s rights and gay liberation, and struggling to right wrongs of the day. “The People Speak” will feature performances celebrating the often neglected history of the United States. It will give voice to leaders, activists, rebels, dissenters and visionaries from both the past and present.

Joan Baez will be one of the performers, along with Wallace Shawn, Jesse Eisenberg, Taylor Schilling, Melissa Leo, Frances Fisher, and Laura Gomez.

The big inspiration will be the “sermon” delivered by Nina Turner, first session on Sunday morning.   I don’t attend religious services very often, but I expect the “church” will be packed.

The Summit organizers have sent attendees a link to gather questions for Bernie.   This is probably the most systematic way to do the Q & A.   So, let’s crowdsource here!  What’s your question for Bernie?  I have to submit them I think by tomorrow night or early Thursday morning.

Our brothers & sisters at  Jack Pine Radicals have 5 people going, and they are planning to set up Periscope feeds off Twitter (JPR1, JPR 2, I believe).   If I get more info about that, I’ll include it in the Open Threads in the next couple of days.   Meantime, they have the link to the Livestream that will be going on at the conference.  https://jackpineradicals.com/boards/topic/the-peoples-summit-2017-hosted-live-stream-event/

Not the Establishment Tip Jar…

Also, this is an open thread if you wish to post other news.

This tidbit caught my eye..

Symone Sanders, a democratic strategist, CNN commentator and former advocate for Bernie Sanders’ 2016 presidential campaign struck a similar note. “I am still planning on doing the show Friday,” she told HuffPost. “I thought Maher’s comment, Ben Sasse’s reaction and the crowd’s applause were all equally distasteful, inappropriate and offensive. I am glad Maher too recognized as such and issued an apology.”

This is all well and good (and makes for solid television). Yet, the question must be asked: in showcasing people who are, to some extent or another, accepting of Maher’s apology and willing to talk the matter out with him, is the host delivering a strong and necessary conversation on race and privilege or simply serving himself?

Certainly, the show will be on Maher’s terms and — perhaps pleasingly for the famously smarmy, self-assured host — all about him. While the live format could allow his guests to throw him curveballs, he will remain in the driver’s seat.

This lineup, and the fact that Maher looks willing to talk about this issue, could wind up creating an episode that’s a great step forward, a true apologia combined with a real confrontation of the icky, nasty places most white liberals would rather not believe exist within themselves. Then again, it could wind up as a self-aggrandizing exercise in cynical rebranding, damage control paired with further polishing of Maher’s already outsized self regard.

With so much at stake, the progressive cavalry has turned up to aid Labour’s efforts ahead of the vote. Claire Sandberg, an American activist and former digital organizing director for Bernie Sanders during his primary bid, is in the UK now, advising Labour-aligned groups working to defeat May and the Conservatives.
I spoke to Sandberg over email on Monday about what she’s doing, the state of the race and how its results might affect the US political scene. Here is a transcript of our conversation, lightly condensed and edited.

Krieg: First, the news. There have now been two terror attacks during your time in the UK — Manchester and then, of course, on Saturday night in London. So that’s three in a relatively short period of time. Will the attacks weigh on voters — and could they tilt the results on June 8?

Sandberg: There’s no way for the attacks to not be on the minds of many voters. The sense that these attacks are rare or difficult to plan, or that after police raids and arrests people will be safe for a while, is giving way to the expectation that more attacks like these may be inevitable, and could come at any time.
But how that increased worry about terrorism will play out politically may not be in the way outsiders would expect.

The tabloid press was already in overdrive even before this latest attack, trying to paint Corbyn as soft on terrorism because of his talks with Sinn Fein, the Irish nationalist party, in the 1970s and 1980s. But I think, increasingly, many voters are seeing that line of argument as a cheap political attack that doesn’t bear any relevance to today’s terror threat, and they feel that Theresa May, who was home secretary for six years before becoming Prime Minister, has a lot more to explain to voters.
In particular, she’s drawing a lot of criticism over her drastic cuts to the police forces — there are 20,000 fewer officers now than there were in 2010. Law enforcement leaders had previously voiced alarm over those steep cuts, but May accused them of “crying wolf.”

May’s response to London Bridge has been to call for censorship on the Internet and a new agency to counter extremist ideology, but her four-point proposal was immediately blasted by former top law enforcement officers, who decried her cuts and said that May had only been able to temporarily step up the police presence following Manchester by forcing cops to work 16-hour days and take mandatory overtime. Now, May and her deputies are scrambling to explain themselves, while Jeremy Corbyn is calling for the cuts to be reversed and for security services to be fully funded.

Why Elites Hate: The liberal contempt for the Middle Class is Baked into Identity Politics

Nine years after Barack Obama accused small-towners of clinging to guns or religion, nearly three years after Jonathan Gruber was shown to have attributed ObamaCare’s passage to the stupidity of the American voter, and eight months after Hillary Clinton pronounced half of Donald Trump’s voters “irredeemable,” Democrats are now getting some sophisticated advice: You don’t win votes by showing contempt for voters.

In the last week or so a flurry of articles have appeared arguing for toning down the looking-down. In the New Republic Michael Tomasky writes under the heading “Elitism Is Liberalism’s Biggest Problem.” Over at the New York Times , Joan C. Williams weighs in with “The Dumb Politics of Elite Condescension.” Slate goes with a Q&A on “advice on how to talk to the white working class without insulting them.” Stanley Greenberg at the American Prospect writes on “The Democrats’ ‘Working-Class Problem,’ ” and Kevin Drum at Mother Jones asks for “Less Liberal Contempt, Please.”

None of these pieces are directed at Trump Nation. To the contrary, they are pitched to progressives still having a hard time coming to grips with The Donald’s victory last November. Much of what these authors write is sensible. But it can also be hilarious, particularly when the effort to explain ordinary Americans to progressive elites reads like a Margaret Mead entry on the exotic habits of the Samoans.

Mr. Tomasky, for example, informs progressives that middle Americans—wait for it—“go to church.” They have friends (“and sometimes even spouses”) “who are Republicans.” “They don’t feel self-conscious saluting the flag.” Who knew?

Most of these writers allow that there is at least some fraction of Trump voters who are not deplorable. What they do not appreciate is how condescending they can be while advising their fellow Democrats to be less condescending. Exhibit A: Mr. Drum’s recommendation that Democrats can “broaden [their] appeal” because these are “persuadable, low information folks.”

I recognize this is from the WSJ, but bear in mind, many WSJ’er voted for Clinton.

They are talking to “liberals”, not “progressives”. WSJ is using – mistakenly – the two terms interchangeably, and they are two entirely different things.

Yo, this is almost ugly:

Hillary Clinton seems to have launched yet another political campaign in 2017, one to convince Americans that they absolutely did the right thing by not electing her president in 2016.

Which is not to say the victorious alternative was ideal either.

But the ongoing public Clinton struggle with herself is alienating even supporters, and it’s crippling the required remodeling and rejuvenation of her aged Democrat Party that needs a very long rehab at some political spa.

I really, really wish I was able to make it this year but just couldn’t make it work with my schedule at the moment. I will however be providing a lot of livestreams, video clips and other coverage.

As for Bernie questions… I’ll get back to you before Thursday!After seeing so many rallies, interviews, other appearances, etc.. its hard to think of something original! 🙂

This is one I sent, although I think we can send more.

My questions are more basic: one of the issues I see for Congress/Senate is the use of the rules/procedures to either pass legislation with haste or slow it to a halt. In some instances, that is helpful, but more often, it is not. Thus, I believe that is why Congress’s poll ratings are low because of the obscurity of the rules which govern Congress and their calendars, and Congress/Senate is out of session more than the 40 hr-60 hour week working person. How can Congress explain these special rules/procedures better to ensure that the people understand how they are beneficial, and do you support having more calendar days for Congress/Senate to do the people’s business?

Thank you, Senator Sanders. I’m a blogger at The Progressive Wing.

Here’s my question, Benny. Thanks! :

Ajit Pai, who Trump selected as Chair of the FCC, is determined to remove the protections of Title II from what is currently a free and open internet. If he succeeds, it means the FCC will have given “gatekeeper” privileges to Big Cable and Big Telecoms over what is currently free flowing peer to peer movement of data, free of interference, censorship or preferential treatment. Many people are posting comments at the FCC comment page that is critical of this attack on net neutrality. What else can be done to stop this dangerous threat to the democratic free flow of information?