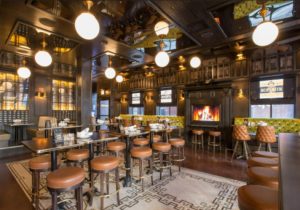 Benny’s bar is open for the weekend. Join us for drinks and conversation below.

AS INFLATION SURGED earlier this year, Sen. Bernie Sanders, I-Vt., and other progressives began hammering away at corporate greed, accusing monopolies and huge industries of making record profits while claiming that they had no choice but to drive up prices and noting that gas prices were higher than underlying oil prices suggested they should be.

Initially, some in the Biden administration wanted to push this message too, using as their backup their strong record on antitrust and corporate greed, thanks to the Federal Trade Commission’s Lina Khan and the Consumer Financial Protection Bureau’s Rohit Chopra.

Some White House economists, however, fretted that the academic foundation behind the talking point that greed and price gouging were significantly behind the rising prices wasn’t sound enough.

For many on the left, that the White House was getting in its own way by splitting hairs was another example of the asymmetric warfare between Democrats and Republicans, who wouldn’t let trivialities such as whether it was true get in the way of their messaging.

Even while the White House was pushing back, the Democratic Congressional Campaign Committee — the furthest thing on the planet from an anti-corporate populist organ — began asking pollsters to test some of that messaging, according to people familiar with the DCCC’s planning.

Starting around the middle of June, pollsters began testing versions of messaging that played off a bill House Democrats passed in May to crack down on price gouging. A DCCC aide put it simply: “House Democrats voted for a bill that would prevent gas companies from price gouging. Every single Republican in the House of Representatives voted against it.” DCCC Chair Sean Patrick Maloney of New York was a sponsor of the legislation.

The message tested in polling goes like this: With gas prices going up, Republican X voted against cracking down on gas price gouging. Meanwhile, they took X thousands of dollars from the oil and gas industry.

“It tested well,” said one person involved, who was not authorized to speak to the press. “No. 1, everyone is pissed off at gas prices. No. 2, you can connect it very easily to oil and gas, and all these assholes have taken from oil and gas. Well, frankly, so have many Democrats.”

The DCCC’s willingness to dabble in populist politics suggests a broader path forward for Democrats in the wake of the signing of the Inflation Reduction Act, which included the biggest investment in climate spending in history. The bill was watered down by Sen. Joe Manchin, D-W.Va., who profits handsomely from his own coal company. Yet it was opposed by every single Republican in both chambers of Congress. As the clean energy industry grows, those corporations will continue funneling money into the political system. If more Democrats swore off oil and gas money, the party would have more of an opportunity to paint Republicans as the party of Big Oil, yoking them with high gas prices and the ever-worsening consequences of the climate crisis.

Instead, though, Democratic primaries are suddenly becoming contests between nuclear-powered super PACs, with deep-pocketed groups like the American Israel Public Affairs Committee and Democratic Majority for Israel, billionaire Reid Hoffman’s interventions, and proliferating cryptocurrency super PACs all coming in to boost centrist candidates and beat back progressive ones. The result means that the party has fewer candidates who can credibly make the populist critique of corporate profiteering.

In Rhode Island’s 2nd Congressional District, state General Treasurer Seth Magaziner has dabbled in the populist gas price rhetoric, but it lands flat in the face of his more temperate tenure in the treasurer’s office and the moderate hue of his campaign.

His opponent David Segal, on the other hand, has spent his career challenging corporate interests, both as a local elected official and as a federal advocate for the group Demand Progress, though he trails in public polls. “Confronting the power of corporate special interests has been a throughline in my work, from my first run for office as part of a movement [for] fairer wages for workers in Providence to more recent national efforts to help revive the anti-monopoly movement and push back against revolving-door corruption in the federal government,” he said. “We won’t see sufficient action on the other major issues of the day unless we are willing to take on these impediments to progress.”

The DNC is corrupt to the max just like the Repukes. But not all voters are stupid and uninformed. A genuine, smart Progressive candidate knows it. This lesser-of-2-evils BS is getting old, and more and more folks are fed up with it!

T and R x 2, Ms. Benny!!☮️🙂👍Glad I was able to spell you for a couple of days. Latest down here is the GOPukes might be messing with the mail-in ballots. Those aholes never give up. Man, I hope I live long enough to see a few of them and the white collar crooks who support them and a few Demos in jail!

Unfortunately, a lot of restaurants and bars don’t carry the sugar-free soda, That said, it’s a good drink. 🙂

New polling shows that a majority of California voters do not want Joe Biden to run for office again in 2024, with equal percentages of Democrats saying that progressive Senator Bernie Sanders of Vermont and their state’s Governor Gavin Newsom would be their top choice to replace the current president.

Biden has seen his approval rating tank rapidly over the past year, leading some Democrats to raise alarms that he would be unlikely to win a second White House term in 2024. Many have also raised concerns about Biden’s age, as he will turn 82 shortly after the next presidential election.

While Biden’s age and health may be a concern to some, a sizable portion of California voters don’t seem bothered by the prospect of Sanders, who will turn 83 in 2024, becoming president. The independent from Vermont, who unsuccessfully sought the Democratic Party’s nomination in 2016 and again in 2020, tied with Newsom as the top choice for California’s Democratic voters, according to new polling published Friday by UC Berkeley’s Institute of Governmental Studies.

Sanders, who won the 2020 Democratic primary in California, and Newsom, 54, both were selected as the top choice to replace Biden as the 2024 nominee by 13 percent of Democratic survey respondents. Vice President Kamala Harris, 57, who previously served as a senator for California, came in third, with 10 percent selecting her as their top choice.

Newsom pulls ahead in the survey when respondents’ second choices are factored in with their first options. Then the California governor is backed by 25 percent, compared to 18 percent who supported Sanders and Harris.

Overall, the poll showed that 61 percent of California voters of all political persuasions oppose Biden seeking a second term. Among Democrats, 46 percent oppose the president running for the White House again while an equal percentage support him seeking another four years as commander in chief.

The survey was conducted from August 9 to 15 among 9,254 registered California voters. It had an overall margin of error of plus or minus 2 points, with the sampling error among Democrats being plus or minus 2.5 points.

Kinda surprised even though Cali likes Bernie, i doubt he would do it. Bernies hands down is more sound of mind than Byedone is. Bernies one of those rare guys that dont lose much mentally as they age.

the cartoonist’s were on a roll today

A 5th for Rudy