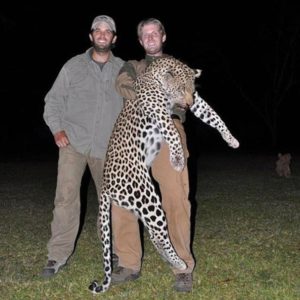 They’re all young enough to serve. Yes, the Army won’t allow Jared and Don Jr to enlist since they’re over 34, but I’m sure the President can make a call and request an exemption.

If Donald Trump is going to deliver “fire & fury”, perhaps his kids and sons-in-law should help deliver it. Eric and Don are already “locked & loaded” so to speak. They have the ability to track and shoot dangerous animals as you can see in the photo above. They should require minimal training to serve on the front-lines.

It would really be a wonderful testament to their father and father-in-law’s deep desire to serve his country in Vietnam, which was prevented by his painful bone spurs. Those bone spurs really were a pity, since all those years he spent at the pampered “military academy” were wasted.

Anyway, this generation can redeem all that. I would recommend placing them in a combat infantry unit that leads the “fire & fury” charge into Pyongyang, or any other place Trump wants to go to war.

Hey, maybe we should ask all Senators, Representatives and Presidents’ children to serve in combat roles if their parents voted for war. Wouldn’t that be a good idea?

How about they give a gun to the leopard next time. A much more fair contest I’d say.

The difficult part is where to station them. Perhaps we can split them up as there are multiple war zones from which to choose. Also don’t forget Ivanka as the military readily accepts women.

Good points. Though someone did note that conscripting both Ivanka and Jared might be problematic since they have young kids. But of course, there are lots of poorer families with both parents serving (out of economic necessity).

Shock & Awe crowd. But they are not patriotic to do anything for their country, it’s only personal benefit. And they think they are “leaders” because of a reality show host who happens to be their closest relative.

It appears as if the U.S. Navy secretary is OK with the idea.

U.S. Navy secretary says 'any patriot' should be able to serve: https://t.co/rtfq5rZEYx pic.twitter.com/JnUcFasyDM