A fire at the Grenfell Tower in London on Wednesday may have killed a hundred people:

As the confirmed death toll rose to 30, there were reportedly as many as 70 people unaccounted for since the blaze, which police fear was so devastating that some victims may never be identified. The official number of deaths has sparked anger and confusion within the local community, where people believe the true number is considerably higher.  — Guardian

Labour Party leader James Corbyn visited the complex on Thursday, meeting with survivors. He comforted those searching for loved ones. 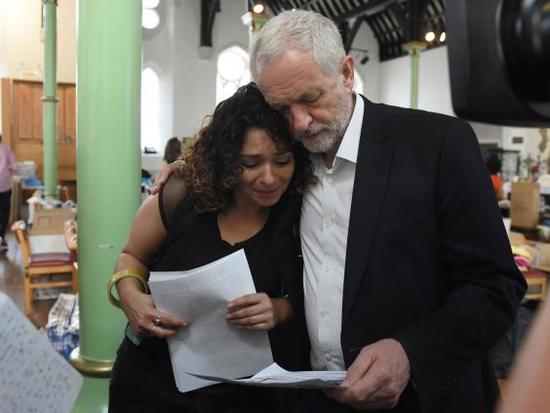 After his visit, Corbyn discussed housing survivors in luxury apartments nearby. The neighborhood is one of the wealthiest in London, with many apartments owned by foreign buyers which sit unoccupied for most of the year. Corbyn had earlier said that austerity cuts for public housing and Conservatives’ failure to update safety regulations might be partially responsible for the fire.

As if those criticisms weren’t bad enough, Conservative Prime Minister Theresa May compounded the crisis by failing to meet with survivors when she visited the site on Thursday. She opted to survey the location with first responders. 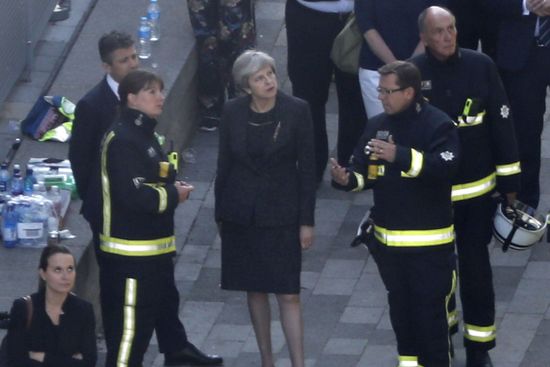 ​PM Theresa May surveying the scene with first responders

May was almost immediately excoriated by the UK papers for the stark contrast with Corbyn’s visit:

In contrast, Corbyn was lauded by the press and survivors for his visit. The Independent quoted one resident saying “he’s one of us”. The criticism got to be so bad that PM May returned on Friday to visit survivors at a church being used as a shelter. As she left that visit escorted by police, she was heckled by protesters who shouted “shame on you” and “coward”.

In 2009, a fire at a public housing complex in South-East London killed six people, including three children. An investigation found the local authorities failed to maintain the building up to fire code.

There were blog posts  yesterday that chronicled the repeated attempts by residents at Grenfell Towers to have management fix sprinklers, fire alarms and other equipment in the building.

I’m still just trying to see what the media puts together as the investigation continues. I do know there are plenty of angry people, and if Corbyn is right, May is going to have a hell of a Question Time next week, much of her Homeland group to do some explaining in meetings.

It’ll be interesting to see the millionaires who seldom live in their luxury flats are willing to put up funds to put those displaced in decent housing.

Theirs a difference between someone that wants a photo op and someone that’s a person of the people and is genuine about it. The difference is easy to see here.

The people are impressed with May! LOL

Thousands of protesters gathered outside 10 Downing Street, chanting slogans May Must Go and #Justice4Grenfell pic.twitter.com/D8IIIhoAza

The question is how much longer will she last?

Theresa May’s handling of the London fire is hastening her demise. https://t.co/HWaAsbqPxc

Theresa May just go and play
Jeremy Corbyn will save the day!

Sadly it was all about saving money to beautify the building.

The insanely tragic and callous thing is the cladding project cost millions apparently. They cut corners for 5k and now dozens are dead. It is an absolute shame.

Oh yeah, let’s go, world! Let’s start the truth speaking, the truth in motion, the truth of being human—that our relationships with our brothers and sisters are what truly make our lives meaningful, not pocketing dough while others die. And we all KNOW this, and we’ve forgotten it.

Yes, I still like money very much. And I’d like to think we can have both physical and relational abundance. But if you forget your fellow beings, your joy is not true.

“The people who died and lost their homes, this happened to them because they are poor,” claims .@akalamusic who lives in the area #Grenfell pic.twitter.com/x1Rn0ZOFdP

Im a huge Akala fan (even wrote a post about him here once I do believe). His facebook and twitter are great ‘must follows’ for a perspective on UK life that doesnt often make it to the media.

"Cold like a fish" – #GrenfellTower protester on @theresa_may #Newsnight pic.twitter.com/vWiBVZgoS6

I've never seen anything like this. Theresa May practically running to her car as a crowd shout "coward". This is not leadership. #Grenfell pic.twitter.com/AoOuH1Yvio

Here is one more.

He was responding to this.

Jeremy Corbyn runs the risk of overplaying his hand by politicising the Grenfell fire with such ruthless efficiency https://t.co/xvG7skGZqq

Listen up, Economist, this IS a political tragedy, and y’all would do well to stop asking us to forget what your beloved austerity and corpse favoring does to us.

PM May invited a group of survivors to 10 Downing today. From HuffPo:

Theresa May has sought to quell anger over the Grenfell Tower disaster by inviting survivors to Downing Street – after the embattled PM was forced to flee crowds of furious residents on Friday.

Residents and volunteers will attend a private session at No 10 on Saturday, it was reported, after intense criticism of May’s approach in the aftermath of the blaze, which claimed at least 30 lives and injured dozens more.

Residents of the destroyed tower said May was far too slow to visit the stricken community, that the building had been unsafe and that officials have failed to give enough information and support to those who have lost relatives and their homes.

i hope they tell her nothing less than her resignation will suffice. as if she will change her spots.

Thank you for covering the Grenfell Tower tragedy Subir.

It’s all so sad. The sheer awfulness of the factors in the fire and resulting deaths has ripped open, for all to see, the real effects of classism, austerity and disregard for the well-being of those on the lower rungs of the privilege and economic ladder.

This is the most extraordinary, devastating interview with @DavidLammy pic.twitter.com/QFbKwOUf6I

It’s all been laid bare.

By the way, the “anti-social and harassing behavior”? Playing with “balls in the area”. Heaven forbid that the kids get to have a little outdoor time.