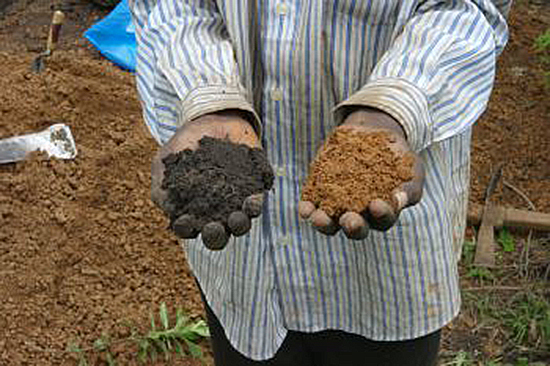 A farming technique practiced for centuries by villagers in West Africa, which converts nutrient-poor rain forest soil into fertile farmland, could be the answer to mitigating climate change and revolutionizing farming across Africa.

A global study, led by the University of Sussex, which included anthropologists and soil scientists from Cornell, Accra, and Aarhus Universities and the Institute of Development Studies, has for the first-time identified and analyzed rich fertile soils found in Liberia and Ghana.

From analyzing 150 sites in northwest Liberia and 27 sites in Ghana researchers found that these highly fertile soils contain 200-300 percent more organic carbon than other soils and are capable of supporting far more intensive farming.

Professor James Fairhead, from the University of Sussex, who initiated the study, said:

“Mimicking this ancient method has the potential to transform the lives of thousands of people living in some of the most poverty and hunger stricken regions in Africa.

“More work needs to be done but this simple, effective farming practice could be an answer to major global challenges such as developing ‘climate smart’ agricultural systems which can feed growing populations and adapt to climate change.”

Similar soils created by Amazonian people in pre-Columbian eras have recently been discovered in South America — but the techniques people used to create these soils are unknown. Moreover, the activities which led to the creation of these anthropogenic soils were largely disrupted after the European conquest.

Encouragingly, researchers in the West Africa study were able to live within communities as they created their fertile soils. This enabled them to learn the techniques used by the women from the indigenous communities who disposed of ash, bones and other organic waste to create the African Dark Earths.

According too Dr Dawit Solomon, the lead author from Cornell University,

“What is most surprising is that in both Africa and in Amazonia, these two isolated indigenous communities living far apart in distance and time were able to achieve something that the modern-day agricultural management practices could not achieve until now.

“The discovery of this indigenous climate smart soil-management practice is extremely timely. This valuable strategy to improve soil fertility while also contributing to climate-change mitigation and adaptation in Africa could become an important component of the global climate-smart agricultural management strategy to achieve food security.”

I wonder if this revitalization of the soil can be done anywhere the soil has become depleted due to naturally occurring and man made causes?

Bold emphasis was added by me.

The study has been published in the journal Frontiers in Ecology and Environment.

What an exciting report,

It has the potential to put the Big Chem Agri-Fertilizer business out of commission…so I am not surprised that I have only heard about it in an obscure anthropology journal.

Old technologies are being rediscovered as the best management for our soils and agriculture and yet profit rules the day. I have fought for against industrial agriculture for a long time now which treats the living soil like a dead matrix for chemical additions. Soil can save us with its phenomenal ability to sequester carbon and it is a cheap system as well.

Africa also has the world’s largest repository of drought resistant seeds. This genetic treasure could also save the world.

The blind greed of Big Ag and Big Food will kill the soil, our genetic treasure and our climate before they give up their quarterly profits. Monsanto et al have teamed up with USA 4-H to trap African farmers into their system of chemicals upon more chemicals.

Looks like Monsanto wants to dump its Round-up Ready GMO seed and chems on Africa. I didn’t know they were teaming up with 4-H Clubs, but that doesn’t surprise me. They already control most of the crop production here in MN and probably all over America.

I just learned, this year, that farmers in my area that don’t use Monsanto seed are unable to sell their crops at harvest time. The crop is analyzed at the grain elevator and if it has chemically identified genes in it for Monsanto seed and the farmer hasn’t bought a patent from Monsanto that makes their crop illegal, they can’t sell it. The Monsanto seed genes are spread by the wind, contaminating nearby crops. Just disgusting 🙁

All the chem fertilizers dumped on the fields here are getting into the river systems and polluting the waterways( and people’s drinking water)…they eventually flow to the Mississippi polluting it as well.

The “Dead Zone” in the Gulf of Mexico is the result.

Industrial agriculture is hastening the the death of our planet. Every time we try to make a political move against it, they drown us out with money.

Food needs to be a large part of our Political Revolution.

@occupystephanie Well stated. Our society and culture seems so focused on the now and the future that the past gets dismissed. Looking to the past as a way of moving forward shows respect for the totality of human achievement. Alas, greed trumps all.

I agree totally with what you’ve said. The Union of Concerned Scientists has an article that talks about how the hidden costs of that greed are never calculated.

Here’s just a little exert from that article:

“Among the many environmental costs that need to be considered in a full cost accounting of industrial agriculture are:

damage to fisheries from oxygen-depleting microorganisms fed by fertilizer runoff

cleanup of surface and groundwater polluted with CAFO waste

In addition, there are enormous indirect costs implicit in the high energy requirements of industrial agriculture. This form of agriculture uses fossil fuels at many points: to run huge combines and harvesters, to produce and transport pesticides and fertilizers, and to refrigerate and transport perishable produce cross country and around the world.

The use of fossil fuels contributes to ozone pollution and global warming, which could exact a high price on agriculture and the rest of society through increased violent weather events, droughts and floods, and rising oceans.

The full costs of industrial agriculture—including the hidden costs of CAFOs revealed by UCS in the 2008 report CAFOs Uncovered—call into question the efficiency of this approach to food production.”

indigenous/traditional knowledge–who needs that? Is it patentable? No? Let’s make sure we forget it.
Yikes I should avoid over there…makes me snarky and mean….

LOL…I experienced the same feeling after Rec’ing the BNR OT today…its as if troll nastiness is contagious..either that or the last 30 years of defensive martial arts training has finally paid off. 😉

Thank you, grapevines. May this take off like kudzu.

One of the many awful things that the TPP would help to squash.

….from your mouth to Mother Earth’s ears

Oh that would be wonderful..please be my guest! Now I wish I had “fancied” it up a bit before publishing.

I think it is fine. Still, you can always go in an edit at any time!! Lawd knows the TPW stuff has had multiple versions as I added stuff or remembered to add what people said!!

Saw a program on tv years ago about how they make charcoal in South America. Some are urging them to do it in a ‘closed system’ to cut down on emissions (smoke and CO2), but who knows how much that costs? It would have to be affordable for them.

Biochar’s History as an Ancient Soil Amendment— Biochar is a form of charcoal produced from super-heating biomass. It is found naturally in soils around the world as a result of vegetation fires. Biochar has also been created and used by humans in traditional agricultural practices in the Amazon Basin of South America for more than 2,500 years. Dark, charcoal-rich soil (known as terra preta or black earth) supported productive farms in areas that previously had poor, and in some places, toxic soils.

Wow..looks like some people are already on too this! Thank you so much @magsview for the info and link 🙂 Now I need to do some more “terra preta” research and thinking about this. I just watched this video from their site, very interesting.

they have symposiums as well