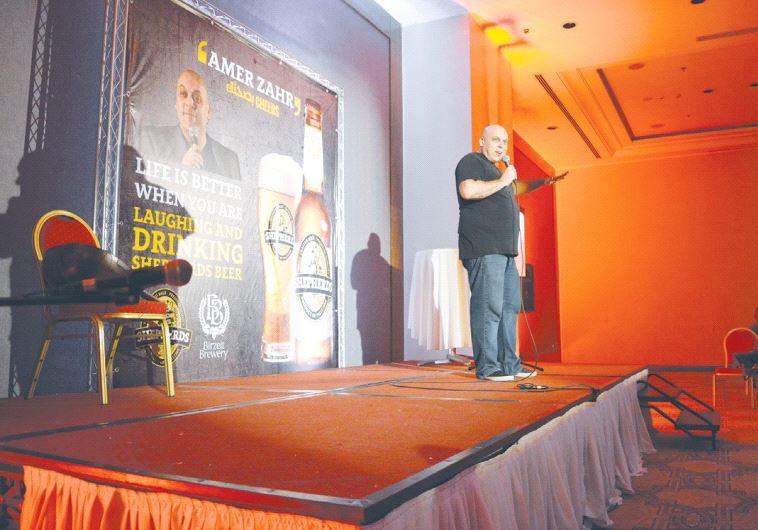 Reprinted from the Jerusalem Post, by Adam Rasgon, Udi Shaham ::

A nice, little upbeat article, for a change. There is hope.

In an upscale entertainment hall at the Movenpick Hotel in Ramallah, some 200 Palestinians and a sprinkling of foreigners have gathered to see Amer Zahr, a well-known Palestinian- American comedian, perform. Well dressed, drinking local beer and eating gourmet shwarma, the guests stand in the hotel lobby, looking forward to the show.

“He represents our culture and holds on to our Palestinian heritage in exile,” says Silvia al-Bina, a Jerusalem resident, who attended the show.

“I feel like he cares about us, and that he is dedicated to our cause,” she adds. “He gives us laughter amidst the checkpoints and occupation.

We Palestinians have a sense of humor, we laugh at this crazy situation.”

Zahr, a 39-year-old comedian born to a family of refugees in Jordan, moved to the United States at the age of three.

He now works as an adjunct professor at the University of Detroit Mercy School of Law, but spends most of his time performing comedic routines on his experience as a Palestinian in the diaspora.

Zahr comes to the Palestinian territories and Israel between one and three times annually.

In 2015, he initiated a five-day comedy festival and performed alongside a dozen other American comedians in Ramallah, Jerusalem and Bethlehem.

In his act at the Movenpick, Zahr offers a series of jokes about topics such as the typical Palestinian family and Palestinian names. He had one joke about the Palestinian “culture of leaving.”

Zahr then jokes that the reason there are still many Arabs in Israel is that they “started to leave” in 1948. “The Israelis came and said to the Palestinians, you have to go, but we only started to leave. So many of us remain here today,” he says.

The comedian believes that the experience of being a Palestinian provides him with endless material for jokes. “We are the only nation in the world that can wake up in the morning and see that Google erased us from its maps,” he tells The Jerusalem Post in an interview following his act, adding, “I can come up with a brand new hour of comedy every day with the number of absurdities that happen to Palestinians here or abroad.”

He does not see humor as an end in itself, but rather as a means. “Comedy is a tool for me to say things that people would not want to hear otherwise; it is the vehicle I use as an artist. I use it to show the ridiculousness of our reality, point out hypocrisies, and empower others,” says Zahr. “I am going to the Tel Aviv airport in a few hours and I will probably be strip-searched. That experience can be very humiliating, but as a comedian I look at it differently.

“I tell the guy strip-searching me that there are 100 other people waiting to be stripsearched and that there is no way one can enjoy or be proud of such a job. In pointing out this absurdity, I turn the experience on its head and create power from a position, which is typically powerless.”

Zahr finds many similarities between the Jewish and Palestinian traditions of comedy.

“The connection between the Palestinian and Jewish experience and for that matter, comedy, is quite clear,” he exclaims.

He believes that the minority status of Jews and Palestinians has motivated the two peoples to act in similar ways, for example, in terms of education.

“When your parents tell you that you must have an academic degree – that’s the life of diaspora, knowing that you can be kicked out from wherever you are at any point in time. That leaves educations as your only solution, when there is no ‘Plan B.’ This is the reason there are so many educated Palestinians in the diaspora, just like Jews in the diaspora.”

However, the Palestinian- American comedian does not see humor as a platform for reconciliation with Israelis.

“It’s not that if we laugh together, it will solve our problems.

Comedy is my form of protest,” he says.

Rather, Zahr believes that Israel needs to end its military rule over the Palestinian territories and ensure full freedoms for everyone. “Israel needs to end the occupation and allow for the establishment of one state, where everyone is equal,” he says, before adding that he is “very optimistic.”

Zahr finishes by saying that he believes in coexistence, but that “we can’t get there until we acknowledge all the absurdities around us.”