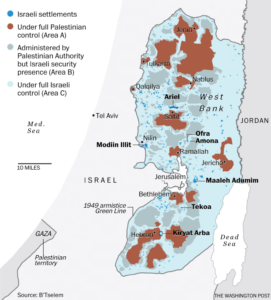 What’s the difference between a Bantustan and Area A?

The Trump administration believes the UN is “bullying” Israel by condemning these policies:

[US Ambassador to the UN, Nikki] Haley arrived in Israel to a hero’s welcome one day after warning that the United States might pull out of the U.N. Human Rights Council unless it changes its ways in general and its negative stance on Israel in particular.

Haley, a former governor of South Carolina who often is touted as a future Republican presidential candidate, has focused heavily on what she calls the mistreatment of Israel during her six months at the United Nations. Her efforts have made her a darling of Israeli leaders, and have endeared her to conservative pro-Israel organizations in the United States. […]

“You know, all I’ve done is to tell the truth, and it’s kind of overwhelming at the reaction,” she said. “It was a habit. And if there’s anything I have no patience for it’s bullies, and the U.N. was being such a bully to Israel, because they could.” — WaPo

Israeli policies towards Palestinians have many parallels with our own treatment of Native Americans. There are other parallels to our history too. For much of the 20th century, towns across the US systematically excluded African-Americans from living there.

What Palestinians are allowed to do in the settlements is work, assuming they can pass a rigorous security screening and a get a permit. But the workers — mostly in construction and service jobs — are not allowed to drive in, and they can’t spend the night. During my two weeks in the West Bank, I learned that the best way to estimate the number of Palestinians working in a given settlement at any moment is by counting the cars parked just outside the gate. This underscored one of the ironies of the settlements, which is that Palestinian hands built most of them: their houses and synagogues, their community centers and shopping malls. — Washington Post

Palestinians are often building these houses for settlers on public Palestinian lands which the Israeli government or settlers have encroached on. In other cases, Israeli officials will condemn private Palestinian lands, establishing “nature preserves” which then turn into gardens or farms for Israeli settlers.

Across Israel proper, housing discrimination is pervasive and various types of discrimination are codified into law. Most housing is largely segregated, with Jewish Israelis living in separate towns and communities, from their Arab Muslim or Christian fellow-citizens. Of course, in the occupied territories, the Israeli army enforces such segregation, just as law enforcement and vigilante groups did in the US.

Such discrimination and oppression is only possible if you successfully propagate a supporting narrative through schools and media. Gil Gertel writing in +972mag discusses how the Israeli education system has helped sanitize Palestinian suffering:

In the wake of the 1948 War, the list of people we forgot only got longer — refugees whom we continued not to see. This is what students read about that period from the “Artzi” textbook, published in 1950: “It is very good that we found a desolate and abandoned land. It is good that every piece of land we obtained is for us […] none of those who hate us (and their numbers are great) can complain that we took someone else’s land.

This book was published two years after the Nakba, when 750,000 Palestinians were expelled from their homes. The Israeli government subsequently razed to the ground hundreds of villages to prevent the inhabitants from ever returning. The JNF began a campaign to plant “forests” to erase evidence of Palestinian villages. Palestinian houses in urban areas were reassigned to Jewish persons.

Students, however, were told it was a “desolate and abandoned land”. In a way, this is analogous to the stories we still tell our students about early European colonization of this country and the impact on Native American peoples.

This is what we teach our children, from a fifth-grade textbook: “In 1967, following the Six-Day War, the territories of Judea and Samaria, which were not yet in Israeli hands, came under its control. Today it is populated by both Arabs and Jews. The Arab population, according to estimates, is comprised of 1.5-2.5 million people, who live mostly in urban areas […] the Jewish population is closer to 400,000, who live in approximately 125 settlements.” (pg. 156). How idyllic: those territories “came under our control,” a real miracle. Jews and and Arabs living side by side — the Switzerland of the Middle East.

It is certainly enough to make one’s head spin. Sadly a majority of the people believe that Israel is hard done by.

This continuation is certainly horrific for the Palestinians and also should be seen as bad, IMO, by the Israelis as harmful to their own selves. It takes its toll. Very short sighted and damaging to the democratic ideals that are shredded every day by these policies – hurtful to the victims and ultimately (as Athol Fugard wrote about South African apartheid in “A Lesson from Aloes” to those who perpetrate it – depriving themselves of the cultural enrichment of welcoming other cultures into their lives.