Bernie Sanders will be speaking again in Washington DC today. The National Nurses United are holding a people’s rally with Bernie as the main speaker. What: Rally for social and economic justice and equality Featured speaker – Sen. Bernie Sanders When: Thursday, November 17, 1 p.m. Where: Upper Senate Park, U.S. Capitol, Washington DC Here is a link to the live streaming feed. http://www.nationalnursesunited.org/videos

END_OF_DOCUMENT_TOKEN_TO_BE_REPLACED

The fight for CD 19 in New York is heating up. I saw my first republican attack ad against Zephyr Teachout on broadcast television yesterday. They called her “Professor Teachout” and said she promotes “Islamic Terrorists”. That made me donate $50 to her campaign. [embedyt] http://www.youtube.com/watch?v=FF3GImC8Ky0[/embedyt] What’s on your mind this morning?   Here is that attack ad I saw yesterday that made me donate to teachout. [embedyt] http://www.youtube.com/watch?v=HRI_eixwUt0[/embedyt]

END_OF_DOCUMENT_TOKEN_TO_BE_REPLACED

http://nyti.ms/2cQa5MR A Pipeline of Beer: Not Just a Fantasy Beer! The Lifeblood of a nation. A Pipeline of Beer: Not Just a Fantasy Halve Maan Brewery lies in the center of Bruges, Belgium, but its bottling plant is on the city’s outskirts. Trucks became expensive and impractical, so the owners built an underground pipeline to carry the beer. Beneath the gilded spires and medieval cobblestone streets of Bruges, the lifeblood of Belgium now flows at more than 1,000 gallons an hour. The turn of a tap on Friday propelled the Belgian city into the future — and sent its citizens … END_OF_DOCUMENT_TOKEN_TO_BE_REPLACED 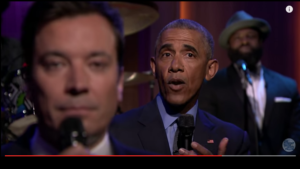 News “explainer” Vox (6/10/16) ran a seemingly innocuous write-up on Friday of President Barack Obama appearing on NBC’s Tonight Show Starring Jimmy Fallon the night before, “slow jamming” the benefits of the highly controversial Trans-Pacific Partnership: “Watch: President Obama Sings Rihanna With Jimmy Fallon to Explain the Importance of the TPP.” It would be funny if it weren’t a borderline parody of everything wrong with corporate-owned “new media”: What we have here is a Comcast-funded website plugging a Comcast–owned TV show to promote a trade deal aggressively lobbied for by Comcast. NBC and the Tonight Show are owned by NBCUniversal, a wholly … END_OF_DOCUMENT_TOKEN_TO_BE_REPLACED

I received an email late last night from WORD co-founder Danielle Norwood with a statement about Hillary’s campaign using imagery from the women’s movement. I’m posting about it here for my first entry at TPW. Please follow the link and read the entire statement at their web site.     http:// statement from WORD I’ll say this for Hillary Clinton: she certainly has nerve. In a new campaign video, Clinton uses imagery from the women’s movement to position herself as a feminist candidate and her candidacy as a step forward for women. Seemingly without irony or self-awareness, she uses the … END_OF_DOCUMENT_TOKEN_TO_BE_REPLACED