Good Evening Birdies! The top 1% owe 70% of unpaid taxes. Collecting less than a third of those taxes can fund all of this: 🎓 Tuition-free college for all🏡 A Green New Deal for public housing🚰 Clean tap water for all🍝 Universal school meals Don't tell me we can't afford to live with dignity. — Bernie Sanders (@SenSanders) November 19, 2019 Hard to argue with that!

END_OF_DOCUMENT_TOKEN_TO_BE_REPLACED

This morning I saw this headline, from CNBC. ‘Our medical bills were 2 feet high’: How families grapple with medical debt What has that got to do with the man mentioned in the headline? Here are the first two paragraphs: Democratic presidential candidate Bernie Sanders is proposing to wipe out an estimated $81 billion in past-due medical debt. Up to 80 million Americans could be impacted. “People definitely need to have their debt either forgiven or negotiated lower, so they can afford it without a hardship,” said Craig Antico, the co-founder of RIP Medical Debt, which buys and forgives medical … END_OF_DOCUMENT_TOKEN_TO_BE_REPLACED

I am glad to be home in Burlington to rest for a little bit. I want to thank all of you for your well wishes, love, and support over the week. I am recovering well and feeling much better. I am more determined than ever to fight alongside you to make health care a human right. — Bernie Sanders (@SenSanders) October 6, 2019

END_OF_DOCUMENT_TOKEN_TO_BE_REPLACED 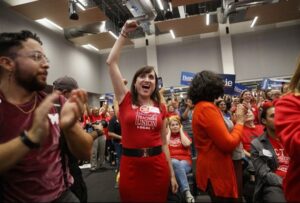 (the link for that picture is in the comments)

Tesla must reimburse workers and hold a public meeting in its factory explaining how it broke labor laws after unfairly preventing employees from unionizing, a judge ruled in a National Labor Relations Board complaint Friday, according to media reports.

Administrative Law Judge Amita Baman Tracy found that CEO Elon Musk violated national labor laws when he implied via tweet that Tesla workers who unionized would have to give up their company stock options. 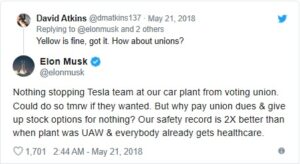 The company must hold a meeting at its assembly plant in Fremont, California, and Musk or the NLRB will read a statement explaining how Tesla broke the law. Musk must attend, the judge ruled.

p.s. I love how Musk said, “everybody already gets healthcare”-a great example of how MFA would take healthcare out of the employer’s leveraging toolkit.

A GoFundMe campaign is underway for the vet who spoke up at Bernie’s town hall in Nevada the other day.

This is painful to hear. But there are millions of people like John facing an unimaginable burden due to the cost of medical care. This is why we fight for Medicare for All.

The donation link is here.

Its goal is $150,00 and I’ve been watching it steadily climb, small donation by small donation. Bobi Haley just gave in the most recent donation, of $5, and Linda Ganz, also $5, succinctly commented most recently:

No one should kill themselves because of medical bills.

It’s currently up to over $15,000. After hearing that man’s plea for help I hope that goal is met. Heartstrings pulled. 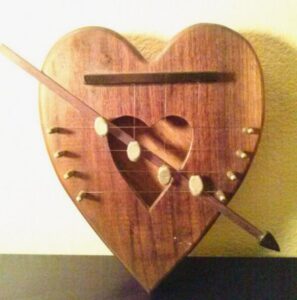 “Hearing his voice, that was really powerful. It was a wake-up call,” Weigel said. “I know he cares. He’s always cared about veterans.”

People are posting pics too: 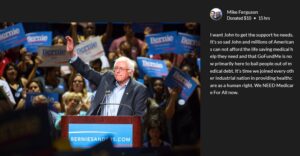 Some good articles on The Nation today related to 9/11.

In the 18 years since 9/11, war has become this country’s permanent condition, with no peaceful end in sight.

This September 11 marks the 18th year since hijackers seized four US airliners, plowing three of them into the World Trade Center and the Pentagon and the fourth into a field in southern Pennsylvania. The attacks killed nearly 3,000 people and deranged our national politics. In the fraught months that followed, US leaders declared one war after another, miring this country in conflicts from Central Asia to the Middle East. There is still no end in sight.

The longest of these conflicts—in fact, the longest war in US history—is the one that George W. Bush launched against the Taliban less than a month after 9/11. He called it “Operation Enduring Freedom” and claimed its mission was “to disrupt the use of Afghanistan as a terrorist base of operations and to attack the military capability of the Taliban regime.” He spoke of “freedom.” He trumpeted the “generosity” America would show the Afghan people. But many of us knew what this really was: a war of vengeance, waged against an impoverished country some 7,000 miles away, with no meaningful vision for peace.

But far too many people just went along with it.

Wars without end expand the prerogatives of the president and the budgets of the national security state. Presidents from both parties have repeatedly invoked the post-9/11 Authorization for Use of Military Force to dispatch troops across the globe. In today’s dollars, the Pentagon’s budget now exceeds its levels at the height of the Cold War.

Forever war is an affront to our Constitution. The founders, worried that the executive had an inherent propensity for war, gave the power to declare it to Congress, believing that this decision should be made only by the people’s representatives after debate and deliberation. Now, war is our permanent condition, and Congress has essentially abandoned its constitutional responsibilities.

Who will have the guts to change this “condition”? I can think of one person who might fit that bill.

I have the town hall on now and will report in with snippets I see.

Please help me out with snippets of your own as I can’t watch it all!