Even in a pandemic, the long arm of big corporate interests drives legislation. Turns out the much heralded paid sick leave provision in the house bill doesn’t cover large companies with over 500 employees. That’s more than half the workforce. House Speaker Nancy Pelosi on Friday night celebrated the coronavirus legislation that passed early Saturday as providing paid sick leave to American workers affected by the pandemic. She neglected to mention the fine print. In fact, the bill guarantees sick leave only to about 20 percent of workers. Big employers like McDonald’s and Amazon are not required to provide any … END_OF_DOCUMENT_TOKEN_TO_BE_REPLACED

Van Jones trying to offer Biden advice on how win over the toxic members of the Sanders cult. As far as I'm concerned, Sanders, the Berners and Van Jones can all go get fucked.

“Toxic”, “Sanders cult”, “get fucked”. Wait it gets better. Who is this guy? Some rando on Twitter? No, he’s Neera Tanden’s pal:

Eclectic has also called a young girl with Downs Syndrome a "slut" (22/?) pic.twitter.com/WZX6v56CJF

He isn’t the only such pal, CAP’s leader Neera Tanden has in her orbit:

who co-founded Hillary Men & is part of Neera Tanden's twitter army of online hate and toxicity. Note that Tom, who claims to be a voice of reason, civility and wokeness, not only compared Sanders to a Nazi in 2016 but he once again, this year, the day after the swastika (4/?)

Neera considers Smartflexin, or Jeremy, a treasure & friend and is grateful for his praise. (We don't know what he said, bc he's no longer on twitter, but it looks like it was nice, judging from her response). Interesting thatTanden, actually calls her group an #army (19/?) pic.twitter.com/Cbi37o6XPF

Check out some more toxicity here https://t.co/wPAeTEorgK, which includes hits like pic.twitter.com/8fhIhfEc1J

him thanking him for his support, which includes tweets like these (13/?) pic.twitter.com/29PkZlRfAT

Dear honest people who've experienced or heard/read about "toxic" #BernieBros & in good faith think they're unique to Sanders or over-represented by his base. All candidates have abusive fans but they're not documented by media. Sanders is the only 1 to condemn his but (1/?)

On Monday, US stock futures were limit down. Oil dropped over 30%, before recovering, to -25%. That’s largely on the Saudis slashing prices to move product, but also pointing to something bigger afoot in the Kingdom, since the crown prince (and Jared Kushner’s pal) arrested several high-ranking cousins this week. But perhaps the biggest news in the markets remains this: The 10 Yr US Treasury hit a 0.50% yield The 30 Yr US Treasury hit a 1.00% yield That means the US government can borrow for 10 years at 0.50% and for 30 years at 1.00%. Neither rate has ever been seen before. During … END_OF_DOCUMENT_TOKEN_TO_BE_REPLACED

He is expected to announce that he is staying in the race. I’ll be delivering a campaign update live from Burlington at 1 p.m. ET. Tune in at https://t.co/vreIiWfeoS. — Bernie Sanders (@BernieSanders) March 11, 2020 Short address, it can be found here: Follow along in comments… Subir I took the liberty to make this also an open thread. I hope you are not offended…..humphrey

END_OF_DOCUMENT_TOKEN_TO_BE_REPLACED 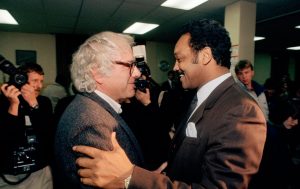 When I’m feeling down about politics. There are a few speeches I will watch, to motivate myself. Today, I re-watched Jesse Jackson’s convention floor speech from 1988. It’s long and broken up in segments, but you can watch them starting here, then here, here, here, here and then, grab some tissues and watch the end here. When I look out at this convention, I see the face of America: red, yellow, brown, black and white. We are all precious in God’s sight – the real rainbow coalition.c […] My mother, a working woman. So many of the days she went … END_OF_DOCUMENT_TOKEN_TO_BE_REPLACED

It is more extreme, but similar to what happened on Super Tuesday. And there are some things numbers just can’t capture:

Polls are officially closed in Michigan, but the East Lansing city clerks office is still packed with students who have been waiting on average 3 hours to vote.

This is what the line currently looks like. Btw most of these people are voting for @BernieSanders. #MichiganPrimary pic.twitter.com/g6YxSUZsMn

Young people waiting three hours in line to vote. Will they do this for Biden? And it’s not just today, this has been the story since the beginning.

More older voters have shown up to the primaries than young ones. That, above all, is why Biden is ahead in votes and delegates. These older voters may get their wish:

There’s nothing Bernie says that a majority of Democratic primary voters find objectionable, not even his description of himself as a Democratic Socialist. Strong majorities of primary voters support Medicare For All in exit polls. Only five years ago, this Democratic Socialist was at the very furthest edges of power in the Democratic party. Medicare For All, a Green New Deal, College for All, Justice and Safety for All, Housing for All, these were fantasies at the lefty-est fringes of the Democratic party. Today, they enjoy wide support among Democrats, independents and yes, even Republicans who want fundamental change.

Yet, as Biden promised to a room full of high-dollar donors a few months ago, “Nothing will fundamentally change”. And therein lies the risk.

This race is far from over yet (though I’m sure some on this blog will claim it is shortly). After tonight, 2,115 delegates will be left to be awarded. Bernie would need to win over 1,200 of them to get to 1990. That is a high bar. But polls swung 36% towards Biden purely on perception of general election strength and support within a matter of days. If that perception changes, you could see a 20% move in the other direction. And it could easily change. Only three weeks ago, Biden’s support on this site was in the single digits. That was emblematic. I continue to believe the Democratic establishment made a huge error by picking Biden. The tide can easily turn if the mistake is revealed.

Even if Biden ends up winning this primary (getting to 1990 pledged delegates), this is a very dangerous moment for the Democratic party. Not only because Biden is weak with young voters. But also because Biden is a weak candidate overall.

The establishment united and stopped them…” –@VanJones68

Yep, the establishment ‘united’ to stop us. Feels shitty af! Thanks for that little bit of truth, I guess. pic.twitter.com/yGNrmK32ol

Last weekend, the elite business and financial interests that fund the campaigns of many moderate/conservative Democrats panicked. They were facing the prospect of Bernie Sanders winning a large number of delegates in a fractured field, making his nomination almost certain. This panic was frantically conveyed to the Democratic establishment, which faced the prospect of losing its funding and therefore its only claim to power within the party. That panic has led to an unforced error, the consequences of which will manifest themselves within the coming weeks and months. If we’re lucky, we can course correct before the general election. It’s up to the Democratic … END_OF_DOCUMENT_TOKEN_TO_BE_REPLACED

19 states and territories have voted so far. Senator Elizabeth Warren, for all her qualities, has placed neither first nor second in any of them. Her best finish and largest delegate haul is from her home state (MA), where she seems to have come in third, with a fifth of the vote. In the state of her birth (OK), she seems to have won no delegates. Here’s what Warren appears to have gathered in terms of votes/delegates yesterday (best estimate based on results so far): STATE % OF VOTE DELEGATES TOTAL DELEGATES AS 1% 0 6 AL 5% 0 52 AR 9% 0 31 TN … END_OF_DOCUMENT_TOKEN_TO_BE_REPLACED