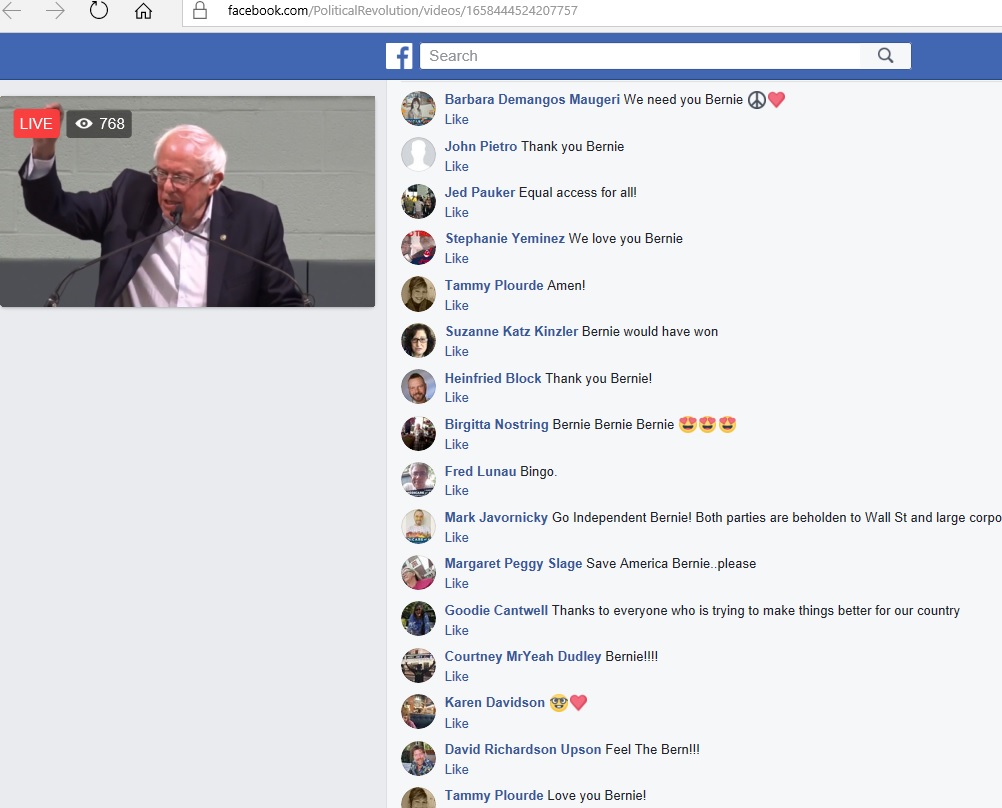 This is the link I’m watching.

College for All Livestream with Senator Bernie Sanders

The comments underneath are wonderful.

Edit: I see that the link popped the feed right up, but if you want to see the great comments, click on the fb icon and watch it there instead.

Pic up top is screenshot of comments when Bernie was waving his finger around earlier.

I’m watching the NJ governor’s debate on C-SPAN. Funny how the woman candidate is wearing a white pantsuit.

Haha, that is funny.

How is Murphy coming across?

I thought just so so. I hope they have another debate.

Gotta say, am enjoying this so much.

My heart went out to the people who spoke.

When Bernie speaks the comments explode. It does my heart good to see the young people respond to his serious and urgent message. They get it.

Here’s a screenshot I took just a few seconds ago.

I posted this at the bottom of the open thread before is saw this post.

“That was quite the introduction of Bernie by David (didn’t catch his full name).”

was a great intro, very heartfelt.

“And let me be very clear”

Talking about apprenticeships, and everything basically, being included in his ‘tuition free’ plan, not just four year degrees.

public education is an investment

“at a time of massive income and wealth inequality”

Just too expensive (they say of his plan)

but what about the tax breaks to the wealthiest?

Stand up
Fight back

Time for another screenshot of heart-lifting comments!

“we are the SEEDS of the grassroots” one person commented.

“So stand up and fight,
we’re gonna win this thing”

“we are the SEEDS of the grassroots” one person commented.

Well, that was great.

Thirty-five co-sponsors so far, none from CT. Looks like I have a phone call to make.
“Hello, Elizabeth Esty?”

Thanks for the liveblog! I enjoyed hearing/reading the snippets.

Shall we also consider this an evening thread?

Definitely!! I’m so not as good as you are at these livestreams. There was a lot going on in the background with phone calls and whatnot. 😉

Yay! Bits of Bernie’s event tonight hitting the twittersphere, I guess everyone picks out the bits that hit home for them:

If only we had even 10 Senators working this hard, this sincerely and this honestly #StillSanders https://t.co/si21ryyURF

What Ali was responding to (go Ali!!! another Berniecrat running)

"As a result of President Trump’s efforts to divide us up, we are seeing more overt displays of racism and anti-Semitism." @SenSanders pic.twitter.com/2IKfUO3dP5

'How tragic is it that kids from low-income families cannot attend college?' @SenSanders talking 'College for all' tonight in Vermont pic.twitter.com/OchCDeOvzZ

NEWARK — The low-profile governor’s race in New Jersey shed its sleepy veneer on Tuesday night as the first general election debate quickly descended into an hourlong rumpus that was both acerbic and wonkish with the two candidates repeatedly lacing into each other’s positions and personal background.

Though the moderators tried to keep the two candidates from confronting each other, the personal invective at times overshadowed any attempts at addressing specific questions from the moderator or the audience.

Lt. Gov. Kim Guadagno, the Republican candidate, repeatedly sought to bring up Goldman Sachs, the Wall Street bank where Philip D. Murphy, her Democratic opponent, worked for several years. The references drew boos at one time from the audience who seemed to view them as off topic.

For his part, Mr. Murphy, over and over, tried to paint Ms. Guadagno as being attached to Gov. Chris Christie “every step of the way.”

But the repeated reference to Mr. Christie, one of the most unpopular leaders in recent state history, gave Ms. Guadagno her strongest line of the night, drawing cheers from supporters and a raised eyebrow from Mr. Murphy.

“The inconvenient truth for Phil is that Chris Christie is not on the ballot in November,” she said. “I am.”