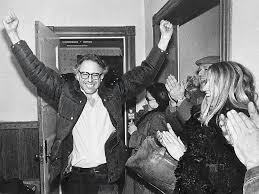 Bernie Sanders has never been afraid. He is not afraid of the billionares and he was not afraid to run as a ‘Socialist’ in Reagans America. I find this a very interesting view into what his foreign policy might look like. I’ve done a transcript to the best of my ability below (sorry for the lack of paragraphs!).

Bernie is consistent as his Iraq war vote shows:

I don’t even need a video to hear Bernie saying that : )

Did you do the transcript, LD?

Yes, I know its not perfect… if I made a mistake please let me know! Also… I suck at paragraphs 🙂

Well paragraphs are kinda hard to determine from someone’s spoken remarks, so I think you’re off the hook with that one. : )

Meanwhile, oh, maybe 1/4 of the way down (*I* suck at fractions), you’ll see this: “If you wish to survive before the people of the world, you can. All you have to do is get down on your hands and knees and say uncle. Thats all.” That is an interesting principal of international relations.”

Sorry. Occupational hazard for me–retired English prof. Hmmm. Maybe that’s an area I could sometimes help out with?

Thanks for all you do–I mean it!

I certainly never turn down someone who offers to correct grammar, spelling and punctuation! In my rush to get stuff out of my brain… I sometimes skip over a good deal of that fairly important stuff 🙂

Thanks for this, LD.

Bernie openly saying this statement of fact alone gives me chills:
“…for the past 150 years or so the US government in its wisdom has decided that Latin-America should be a colony of the US government. That countries that attempt stand up to do things for their own people instead of US corporations are not to be tolerated…”

When I compare Bernie’s courageous truth with Hillary’s activities as Secretary of State it boggles the mind how any American amongst the 99% could think of supporting her candidacy.

People in the 90% (or even the 90%) who support Clinton are like turkeys voting for Thanksgiving.

Yet they become hysterical if we call them low-information voters.