↓
Home→Uncategorized→Breaking: FBI Director Comey to Deliver Statement at 11 am 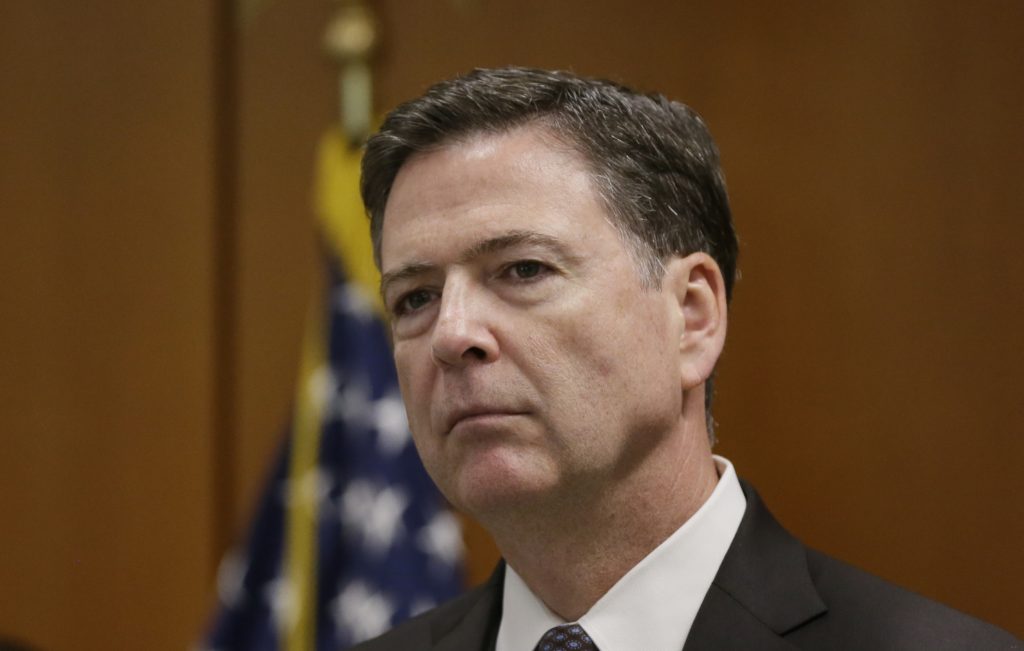 We can use this as an open thread for comments on his statement.  Things are happening so fast!

Comey will speak to reporters from the FBI’s headquarters in Washington, D.C. at 11 a.m. ET. Though officials would not name a topic, media reports suggested it would be linked to the investigation into Clinton’s use of email.

As you all probably know, President Obama is scheduled to stump with Clinton for the first time today. I doubt he’d be out there in public with her if Comey’s news were going to be bad.

Can’t wait. I’ll be glued to the web. I assume this will be covered widely.

FBI Director's on-camera statement will be streamed live on @CBSNLive. I will report his off-camera answers ASAP. https://t.co/q1bfT5fPcA

it will also be on CSPAN 1

and CNN has a little on-screen announcement “11AM ET: FBI Director to Speak to Media.” So it looks like they’ll be covering it.

Well, so much shit has hit the fan in the time between he scheduled this appearance and now, that I guess you never know …

FBI's Comey speaks to the press at 11 am. Obama/Clinton do their first joint campaign rally at 2:25 pm.

President Barack Obama makes his campaign trail debut with Hillary Clinton Tuesday, his own legacy at stake as he works to elect a Democratic successor.

Appearing onstage with Clinton in Charlotte after lending her a ride from Washington on Air Force One, Obama hopes to confer his relative popularity on a candidate still struggling to gain voters’ trust. He’ll tout the four years she served as his top diplomat as evidence of tough-nosed grit, and acknowledge that he himself is a Clinton convert after their nasty 2008 primary campaign.

Clinton’s campaign aides expect Obama to tell the story of his rival-to-friend relationship with Clinton on Tuesday in North Carolina, offering Americans a validating voice on the former secretary of state’s character, fitness and qualifications.

Polls suggest more Democrats trust the President than the candidate herself, and Tuesday’s campaign comes amid refreshed scrutiny of Clinton’s trustworthiness. Obama will issue his first in-person call for Clinton’s election just as his administration completes its investigation into her email practices. The probe brought her to FBI headquarters for an interview Saturday.

The awkward timing is unfortunate for Democrats, who believe Obama can rouse voters not yet clamoring for Clinton. Even as the White House vows utter detachment from the FBI investigation, the question of political interference looms as large as ever.

But any question of waiting until after the Justice Department concludes its work was cast aside as Obama grows increasingly vocal in his denouncement of Donald Trump, and ever more eager to ensure Clinton is elected commander-in-chief.

I just scanned the article and may have missed it — is there a time for this scheduled appearance? I’m interested to know whether it was previously scheduled for a time later than what Comey has chosen for his announcement. (Meaning, will Comey pre-empt?)

Good question. I seem to recall previous anouncement of him to begin campaigning with her today-prior to the recent news.

Posted after yours was a tweet that Comey speaks a 11 AM and the campaign rally is at 2:45 PM.

It’s quite likely that the rally was scheduled long before Comey’s news conference was announced (the 3½-hour interview occurred only two days ago), so even if Obummer knows the substance of Comey’s statement, it would be awkward to cancel it now, in the absence of some sort of serious national crisis.

I’m hoping this is the very last flight on Air Force One for she-who-must-not-be-named!

Seems like the more Obama tries to prop Hillary up, the more evident it is that she is actually pulling him down.

Trusting Obama more than $hrillary ain’t saying much.
I “believed” in “Hope & Change” – an we got Rahm emmanuel as fist COS. Tim Geithner ( ex NY Fed who KNEW but did nothing!) at Treasury, pandering to Joe Lieberman, no Single Payer, and TPP
I’m done believing in ANY Democrat.
Bernie or Bust.

Hi Caerus, good to see you. Dollars to donuts Comey comes out with no there there, but one can hope. I’m done voting for any incumbent Democrat that hasn’t put forth legislation to go to public financed elections and any challenger that hasn’t promised to do so. As this whole primary has shown, the elections are rigged. Why bother voting at all? The outcome has been predetermined. #JillNotHill #BernieOrBust

And Comey is not getting rave reviews either:
http://observer.com/2016/07/james-comey-sells-out/

Comey is going to take “off-camera questions” after his statement. http://hotair.com/archives/2016/07/05/hmmm-fbi-director-to-meet-press-take-off-camera-questions-at-11/

Thus far no major news sources are reporting this, only 4 small ones: bnonews, town hall, hot air, and mediaite. http://www.mediaite.com/online/fbi-director-james-comey-to-give-press-conference-on-unspecified-subject-this-morning/

I did a quick search and saw nothing as well.. but I did find this:

Watch your local @FOXTV affiliate at 11a to see @GreggJarrett and me cover the announcement by @FBI Director James Comey (whatever it is).

I’m watching now. He specifically says that DOJ doesn’t know what he is about to say.

Under streaming media restrictions so cannot watch at the moment. I’ll need updates from you all! 🙂

Here’s the whole thing on Youtube including the after coverage on the local Fox affiliates. It’s between 29:24 including his 15 minute statement.

Is there any coverage of this anywhere? I can’t seem to find any and I’d really like to know what’s being asked (and how it’s being answered).

So far just reviewing the process. Probably to assure folks that they were thorough.

“No intentional misconduct” — she’s going to get away with it, I fear.

No intentional misconduct, but he’s saying she WAS negligent.

If Hillary were still Sec State, Pres O would have to fire her. But instead, he travels with her and seeks to promote her. Disgusting.

Disgusting isn’t the word for it.

Did anyone else ever think they’d agree with Ari Fleischer?

Reckless and EXTREMELY CARELESS. And no charges. Tell it to Julian Assange. WTF?

Look where we have to go in the media to get ACCURATE information.

I’d vote for a purple cantaloupe for POTUS before I’d vote for the Clintons. Both of them, one who must be demented, or very sick, to think we wouldn’t notice his waiting in his own plane on the tarmac for Lynch’s plane to land so he could board it. Which $hrillary calls “just a coincidence.”

Sorry, but Donal Trump is correct, the Clintons are TOO CORRUPT to ever hold government office again. NEVER.

sick-making when I have no choice but to agree with that guy.

If the Rs are already starting with this type of comment, she has a long road left to the White House. They will eventually rally behind Drumpf and beat her head in with this.

Did you read Paul Ryan’s statement? He’s not exactly a big Trump fan either.

Thanks for the link. Yes we haven’t heard the last of this non-indictment. Fits right into Crooked Hillary meme and in any case won’t do anything to improve her unfavorables.

THANK YOU. I DO TEND TO WAX POETIC DURING TRYING TIMES.

ALAS, NO SHORTAGE IN THAT REGARD OF LATE.

White collar crimes are only mistakes! We knew she would not be indicted. The issue now is to expose all her wretchedness and hope she drops out.

It’s impossible for a Clinton to commit a crime because they’re all above the law..

Comey certainly is giving a long statement of what they looked at, such as whether classified was either stored or used on that system intentionally or grossly negligent way or if there as evidence of hostile intrusion (hacking), etc.

Meanwhile, Hillary will be stepping off of Air Force One with the President—as this is being announced. At the taxpayers’ expense. For her campaign.

Is the timing of these two events coincidental?

To be fair, the Clinton campaign will have to reimburse a portion of the expense for using Air Force One, which is estimated to be about $200,000 per hour. Now we know where all of those Dollars for Hillary are going…

True, a portion of it and the timing of it really pisses me off. This looks so stage crafted. The Bill-Lynch meeting, her FBI interview days later, and then the FBI results fall on the same day she steps off Air Force One with the President.

It looks corrupt. The AG and the President should have distanced themselves from her FBI investigation.

My government is an embarrassment. I’m sick to death of being an “Embarrassed American”.

My government is an embarrassment AND CORRUPT TO THE CORE! We must somehow get the Democratic party out of the Klutches of the Korrupt Klintons, even if it means ( for a few years) saying the words President Trump. Short term consequences for long term gain –

The USA, if it elects the Clintons, again, will be an EMBARRASSMENT to the world.

Obama can keep his TPP, go back to his backers on Wall Street and make lots of money = just PLEASE, PLEASE, PLEASE don’t let the CLintons get away with these crimes. So sad, Obama is destroying what little credibility he had left. I weep for him, and us.

The FBI also discovered several thousand work-related emails that were not among the group of 30,000 Clinton gave to the State Dept.

No intentional misconduct with regard to her attorneys’ sorting method.

There is evidence they were extremely careless in handling of classified information!!!!

They are now and all cheering about it. This is not good news for her campaign. Not being criminally charged is a low bar. The findings of the report that she was negligent, reckless, careless with classified information may well sink her campaign.

Hillary already has a trust problem—this certainly wont help her.

I know. Yay, our nominee is just careless and reckless!

You and I might wish it would sink her campaign. But she and her people will consider her cleared. “See? Nothing here to look at, people….”

Any responsible person in her position should have known there was no place for that!

Not enough to bring charges.

Sounds like what I expect that Clinton was careless with her server, she should have known better, but not necessarily attempting to conceal anything.

State Dept gets most of the blame.

Holy shit!!! Am I dreaming?

No, you are having a NIGHTMARE and it’s really happening!

At the time I posted that comment, Comey was still delivering his list of things Hillary had done that were wrong. At that moment, I truly believed he was going to announce a number of charges against her. I was completely dumbfounded when he said there would be no recommendation for charges. I’m still in a state of disbelief!