Abdul El-Sayed said something yesterday that brings into focus the essential dysfunction which is the US health-care system: Cost of a SINGLE vial of insulin: Canada: $32United States: $300 That's TEN TIMES more for the same exact drug. Our healthcare system is broken — and it's putting lives at risk. We're long overdue for #MedicareForAll — Dr. Abdul El-Sayed (@AbdulElSayed) April 2, 2019 On January 23, 1923, an American patent on both insulin and Toronto’s method of making it was awarded to Banting, Collip, and Best. For $1.00 to each, the three discoverers assigned their patent rights to the Board … END_OF_DOCUMENT_TOKEN_TO_BE_REPLACED

Most Americans live in gerrymandered House districts where the outcome of the general election is pre-determined in almost every cycle. This leaves most votes with almost no choice, reduces civic engagement and drives down voter participation. This is a fundamentally undemocratic system. The only thing keeping politicians from becoming completely unaccountable is the threat of a primary challenge. Ayanna Pressley was elected to Congress thanks to exactly such a primary challenge. She beat a 20-year incumbent, Michael Capuano to win the Democratic nomination for MA-7. So it’s understandable that she would take it a little personally when the DCCC revealed … END_OF_DOCUMENT_TOKEN_TO_BE_REPLACED

Wilbur Ross arrived for his Oversight committee hearing with all the false confidence of a billionaire who’s operated with impunity for decades. During the hearing, Ross claimed that his attempt to insert a citizenship question into the 2020 census was: Not influenced by Steve Bannon and Kris Kobach, both of whom urged him multiple times to include such a question to suppress immigrant response rates to the census That the question was included to comply with the voting rights act, and not to reduce the representation of states/areas with immigrant populations That in any case, he was merely reinstating a … END_OF_DOCUMENT_TOKEN_TO_BE_REPLACED

Here’s America’s first black president talking about reparations for slavery and systematic discrimination. Obama: Theoretically, you can make, obviously, a powerful argument that centuries of slavery, Jim Crow, discrimination are the primary cause for all those gaps. That those were wrongs done to the black community as a whole, and black families specifically, and that in order to close that gap, a society has a moral obligation to make a large, aggressive investment, even if it’s not in the form of individual reparations checks, but in the form of a Marshall Plan, in order to close those gaps. It is … END_OF_DOCUMENT_TOKEN_TO_BE_REPLACED

Our ancestors knew this and translated it into actual policy (with flaws of course). Which is why they enacted the Land Grant Colleges act in 1862, funding institutions in each state through the grant of public lands: each State which may take and claim the benefit of this act, to the endowment, support, and maintenance of at least one college where the leading object shall be, without excluding other scientific and classical studies, and including military tactics, to teach such branches of learning as are related to agriculture and the mechanic arts, in such manner as the legislatures of the States … END_OF_DOCUMENT_TOKEN_TO_BE_REPLACED

Go ahead, “call me radical,” newly sworn-in Congresswoman Alexandria Ocasio-Cortez told Anderson Cooper in an interview on “60 Minutes” that aired Sunday in which she also called President Trump a racist.

The 29-year-old Boston University graduate, who gained notoriety this past fall after defeating a longtime incumbent in her New York Democratic primary, has become the youngest woman to ever serve in the US Congress. In the interview that aired Sunday night on CBS, Ocasio-Cortez outlined some of her ambitious policy proposals — as well as her frank thoughts on Trump.

Although the freshman congresswoman acknowledged during the interview that she doesn’t often speak about the president — “I think he’s a symptom of a problem,” she said by way of an explanation — she did have choice words to say about him when Cooper asked.

“The president certainly didn’t invent racism. But he’s certainly given a voice to it and expanded it and created a platform for those things,” she said.

In the “60 Minutes” interview, Ocasio-Cortez also spoke about her progressive policy ideas, as well as how she planned to pay for them. For starters, she floated the idea of a marginal tax in which the very rich would pay as much as 70 percent on a portion of their income to fund her programs, including a “Green New Deal,” which would convert the entire US economy to renewable energy sources.

“People are going to have to start paying their fair share in taxes,” Ocasio-Cortez said.

When Cooper continued to press Ocasio-Cortez on how she would pay for her proposals, she replied, “No one asks how we’re going to pay for this Space Force. No one asked how we paid for a $2 trillion tax cut. We only ask how we pay for it on issues of housing, health care, and education.”

More news/videos/tweets/etc. in the comments.

Naomi Klein from The Intercept Interviews Bernie Sanders at the Gathering.

This sets the tone for the Town Hall this evening:

Today is the last of the federal elections (as far as I know) and it’s down to the wire at the polling stations, which are supposed to close around 7ET/6CT/5MT/5PT.

The runoff is between Republican incumbent Cindy Hyde-Smith (selected earlier this year by the governor upon the retirement of Thad Cochran) and Democratic candidate Mike Espy. 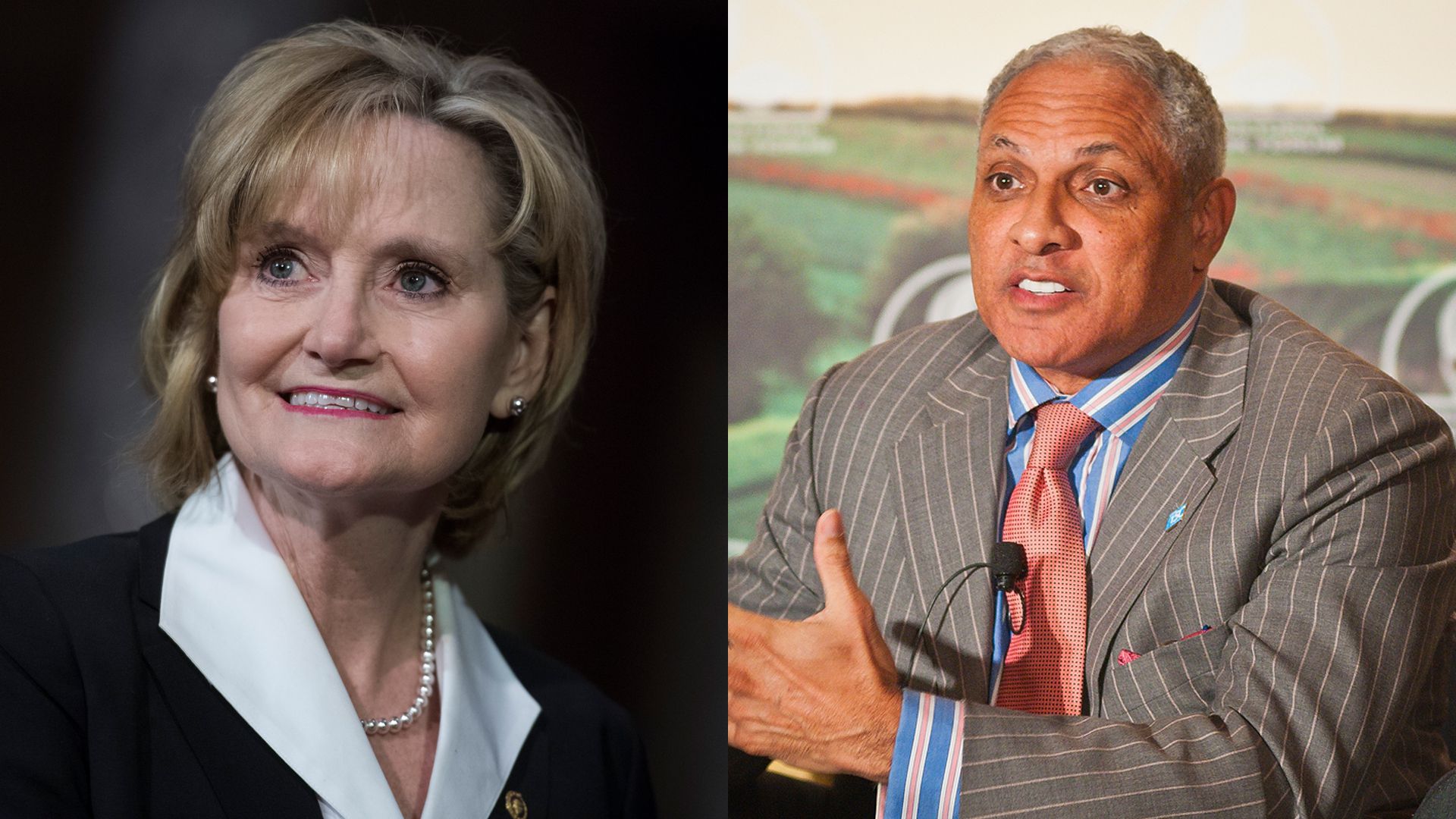 Ms. Hyde-Smith, a former Democrat who was Mississippi’s agriculture commissioner until her appointment to the Senate, has faced a rocky inaugural year in national politics. The White House questioned the political wisdom of installing her in Mr. Cochran’s seat — and that was before Ms. Hyde-Smith drew sustained scorn for comments that were criticized as racist or anti-democratic.

In one instance, Ms. Hyde-Smith said that if a supporter invited her “to a public hanging, I’d be on the front row,” a remark with painful resonance in a state with a history of racist violence, including lynchings. (On Monday morning, state officials said, two nooses were found hanging on the grounds of the State Capitol. Mr. Bryant has asked the F.B.I. to participate in the inquiry.)

In another recorded episode, Ms. Hyde-Smith said there were liberals “maybe we don’t want to vote.”

“Maybe we want to make it just a little more difficult,” she said.

Mr. Espy, who would be Mississippi’s first black senator since Reconstruction, is hardly a newcomer to Washington, and Republicans sought to turn his record in the capital into a cudgel. They have pointed to his lucrative lobbying work, including a stint in service of an Ivorian dictator who is now on trial before the International Criminal Court, to depict Mr. Espy as out-of-touch and lacking in judgment. And the memory of Mr. Espy’s corruption trial, after several terms in Congress and years as President Bill Clinton’s agriculture secretary, has never been far from mind. (Mr. Espy was acquitted of all charges.)

The polls have the incumbent about 10 points ahead, but due to the senator’s hot mike comments, Mr. Epsy has mounted a vigorous campaign and has lowered the ratings from 14 points in October.

Mr. Espy’s ambitions rest on a robust turnout from black Mississippians, who represent about 36 percent of the voting-age population and usually side with Democratic candidates in large numbers. But to win Mr. Espy must also capture about a quarter of the white vote — a tall order given his performance in the first round of voting on Nov. 6, and how political lines often fall along racial ones in Mississippi.

In a strategy that could attract some white voters, Mr. Espy appealed to Mississippi’s perpetual disgruntlement with how it is perceived across the country and argued that a victory by Ms. Hyde-Smith would reinforce stereotypes of the state.

Deval Patrick, Cory Booker and Ayanna Pressley have been down to the state to campaign for Epsy and to GOTV. What’s interesting is that the DSCC has not played any financial or prominent role in this race.

You can follow the results at the NYT here; Politico’s reporting here; or the Clarion-Ledger’s here.

What does this mean for the Senate? If Hyde-Smith retains the seat, she will be the 53rd Republican and with any vote to come up requiring 51 votes, she’s likely to vote with her party as she has a 100% voting record aligned with Trump’s agenda.

This serves as an open thread. Updates as we get them. I will be ordering pizza for carry out.