This morning I saw this headline, from CNBC. ‘Our medical bills were 2 feet high’: How families grapple with medical debt What has that got to do with the man mentioned in the headline? Here are the first two paragraphs: Democratic presidential candidate Bernie Sanders is proposing to wipe out an estimated $81 billion in past-due medical debt. Up to 80 million Americans could be impacted. “People definitely need to have their debt either forgiven or negotiated lower, so they can afford it without a hardship,” said Craig Antico, the co-founder of RIP Medical Debt, which buys and forgives medical … END_OF_DOCUMENT_TOKEN_TO_BE_REPLACED

Hello Friends! A fresh thread for us.

Bernie picked a very good battle, one very much worth fighting, when he jumped into the planned closure of Hahnemann University Hospital.

“The situation in Philadelphia illustrates the entire problem: In a city with one of the highest poverty rates in the country, a major hospital serving low-income communities is on the verge of laying off 2,500 people, abandoning 500 medical residents, and closing its operations thanks to an investment firm looking to make as much money as possible in a corporate fire sale,” Mr. Sanders said July 7, according to Politico.

Mr. Sanders voiced his support for the Pennsylvania Association of Staff Nurses and Allied Professionals, which is advocating to keep the hospital open. The union represents 800 registered nurses at Hahnemann University Hospital. PASNAP endorsed Mr. Sanders in 2016

Important story from @mikeelk about the closing of Hahnemann Univ. Hospital in Philadelphia. Its private equity owner is bankrupting the 171 year-old medical center and selling the real estate for luxury condos

Private equity experts worry that private equity firms buying up hospitals simply to sell them for their real estate could become a trend.

“This is an industry where once somebody does this successfully, lots of other private equity firms will follow,” says Eileen Appelbaum. “You just have to think to yourself how many hospitals are in gentrifying neighborhoods in urban America, where the property is worth a lot more than the hospital itself.” Indeed, Freedman could carry this off himself: Paladin has Howard University Hospital in Washington, D.C.’s luxury condo–packed U Street neighborhood in its portfolio, along with four hospitals in south and east Los Angeles.

Union workers and community members say that’s why they intend to fight against the closing.

“It’s a community, despite the fact that there are lots of hospitals in the city of Philadelphia, the patients and workers who get served by one hospital are a community,” says Sue Bowes. “I am fighting really hard for this hospital not just for us but so that another hedge fund doesn’t come in and close down hospitals, and leave patients with nowhere to go. It’s just simply wrong.”

My question is, how the heck did a private equity vulture get his hands on a university hospital? 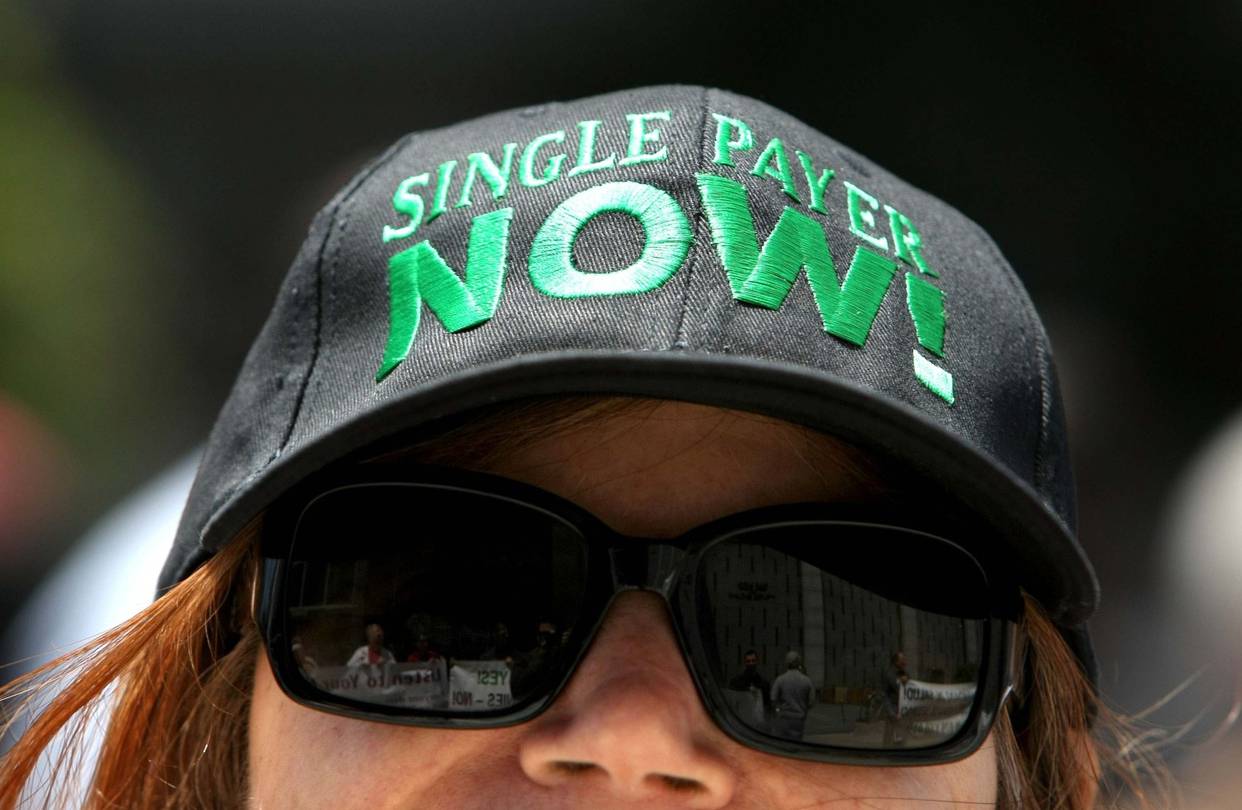 “A single-payer health-insurance system can finance good-quality coverage for all U.S. residents while still reducing overall health-care spending by roughly 10%, according to a study I co-authored last November. All Americans would be able to get care from their chosen providers without having to pay premiums, deductibles or copayments.

Other countries currently provide good health care to residents at a fraction of the U.S. cost. As of 2017, the U.S. spent $3.3 trillion on health care—17% of gross domestic product. Germany, France, Japan, Canada, the U.K., Australia, Spain and Italy spent between 9% and 11% of GDP on health care. Yet some measures—like those based on the amenable mortality rate, which tracks medically preventable deaths—rank the U.S. well below those countries.

The U.S. ranks so poorly in large part because so many Americans lack access to health care. Roughly 30 million people, 9% of the U.S. population, are uninsured. Another 26%, 86 million people, are underinsured—they have insurance but are unable to access medical care because their deductibles or copays are prohibitively high. If all these people were covered under a single-payer system, our study estimates that the overall cost of treatments would rise by about 12%, from $3.3 trillion to $3.6 trillion. Our 12% figure draws from our literature review and the 2016 estimates of Kenneth Thorpe of Emory University. It is modestly higher than the 11.3% estimate the Mercatus Center reported last July.

But Medicare for All could also eliminate 19% of total health-care spending. The largest saving, about 9% of total system costs, would come from dramatically reduced administrative costs in contracting, claims processing, credentialing providers and payment validation—all of which would be unified under one federal agency. Private insurers spend about 12% of their collective budget on administration, while Medicare operates much more efficiently, with administrative costs at around 2%.

Dramatic administrative cuts would mean far less paperwork for doctors and nurses. But administrative simplification would also entail large-scale job loses for the roughly two million people employed both by private health insurers and on the management side of hospitals and doctors’ offices. Our study proposes generous transitional support for these displaced workers, including income, retraining and relocation funds and pension guarantees. We estimate the full cost of this support would amount to about $120 billion, equal to a roughly 2% increase a year in total system costs if spread over a two-year transition phase.

The second major saving our study identified would come from the government negotiating down prescription-drug prices, which would eliminate about 6% of total system costs. Prescription-drug prices in the U.S. are about twice as high as in other advanced economies. Under Medicare for All these prices could fall, conservatively, by about 40%. Further savings would result through operating Medicare for All under a global budgeting system like the one in Canada. Such systems allow regulators to oversee billing and expenses industrywide, allowing them to control fees for physicians and hospitals, reduce unnecessary treatments and fraud, and encourage preventive care.

Taking the cost reductions and expanded coverage into account, we estimated that Medicare for All could operate with an overall budget of $2.93 trillion—nearly 10% less than current spending. To finance this, the government begins with $1.9 trillion already in hand—nearly 60% of the total needed—that pays for Medicare, Medicaid and smaller public programs. The government would therefore need to take about $1 trillion out of what businesses and families now pay to private insurers.

Our study has a few ideas to generate those funds. We propose that all businesses that currently purchase health insurance for their employees be mandated to pay 92% of what they now spend into Medicare for All—saving 8% of their health-care expenditures. Larger firms that haven’t provided coverage for every worker would pay $500 for each uninsured worker, while small businesses would be exempt from these premiums. This measure would raise more than $600 billion. After two or three years, this system could make a transition to a 1.78% tax on gross receipts or an 8.2% payroll tax, either of which would generate the needed $600 billion.

The remaining $400 billion would come from two measures: a national sales tax of 3.75% on nonnecessities, which would generate about $200 billion, and a wealth tax of 0.38%, after exempting the first $1 million of all families’ net worth, for another $200 billion. We also propose taxing long-term capital gains as ordinary income. The sum of these revenue streams will allow Medicare for All to operate with a 1% budget surplus.

Families would pay these taxes instead of premiums, deductibles and copays to private insurers. Except for those in the highest income brackets, this will produce significant savings for families as well as for businesses. Net health-care spending for middle-income families that now purchase insurance for themselves would fall by fully 14% of their income.

Add it all up and Medicare for All is actually the cheaper option for good-quality care in the U.S.”

Mr. Pollin is an economics professor and co-director of the Political Economy Research Institute at The University of Massachusetts-Amherst.

Now how do we get this kind of argument out to every single person? Can we badger the MSM relentlessly?

As it becomes clear that the eventual Democratic nominee will run on Medicare For All, we can expect the policy to be attacked by the concentrated interests who benefit from our current, broken system. The NYT is right there to lend a hand, with a news (not opinion) piece carrying a scary title: Medicare for All Would Abolish Private Insurance. ‘There’s No Precedent in American History.’ Such a change would shake the entire health care system, which makes up a fifth of the United States economy, as hospitals, doctors, nursing homes and pharmaceutical companies would have to adapt to a new set of rules. … END_OF_DOCUMENT_TOKEN_TO_BE_REPLACED

The Sanders Institute’s “The Gathering” is underway. Jimmy and Roslyn Carter sent their best wishes to the group. Sister Turner is up on deck first.

More news, tweets, and videos below in the comments section. TGIF.

Update: The FB link was for the first panel. Here’s a link to the Second Panel discussion.

Robert Pollin & mlighty60 answer the perennial “single-payer” question: “How do we pay for it?" https://t.co/0mmu4FvTYV

Fox News continues to spread misinformation about the Mercatus Study. Here’s Bernie’s video which thoroughly debunks the myths about the Canadian health care system: Fox News is at it again. They can't accept what a right-wing think tank found: that Medicare for All will actually save our country trillions of dollars. pic.twitter.com/5HakZHBFEa — Bernie Sanders (@SenSanders) July 31, 2018 Tweets and news items of possible interest in the comments section. Hope you have a great day!

END_OF_DOCUMENT_TOKEN_TO_BE_REPLACED

Bernie speaks at the 18 minute mark, or you can watch his segment of the event here.

Speaking to a room packed with progressives running for state and local office, Sen. Bernie Sanders, I-Vt., advised the first-time candidates to ignore the political establishment and trust their guts.

Crediting the movement catalyzed by his 2016 Democratic presidential campaign, Sanders said the policies of Medicare for all, free college tuition, a $15 dollar minimum wage, criminal justice reform, and legalizing marijuana are now “mainstream” among Democrats.

“What was once considered radical is now mainstream,” Sanders said Thursday to cheers at the Omni Shoreham Hotel in Washington.

Sanders bashed the political establishment and the press repeatedly throughout his speech. The media, Sanders said, plays a “destructive” game by telling the “American people that politics is too complicated, you can’t get involved, you don’t know how to run for office.”

The former presidential contender encouraged the candidates, who are in Washington for four days of training, to embrace a progressive agenda even if they’re running in red or purple states.

“Let me give you a warning here: Watch out for consultants,” he said to laughs. “Often their advice is conservative and wrong. Trust your own guts, trust your own instincts.”

The training, put on by the Progressive Change Campaign Committee and Sanders’ Our Revolution, includes four days of helping candidates craft their public persona, how to pitch reporters, building field operations, do-it-yourself opposition research, and budgeting.