Good Morning All! Quick update on today’s referendum, well perhaps I should say the attempt to hold a referendum, in Catalonia. The people seemed determined to vote. And the Spanish authorities are definitely not happy about it. Catalan referendum: Clashes as voters defy Madrid Catalonia’s independence referendum has descended into chaos, with clashes occurring as police attempt to prevent the vote from taking place. The Spanish government has pledged to stop a poll that was declared illegal by the country’s constitutional court. Police officers are preventing people from voting, and seizing ballot papers and boxes at polling stations. In the … END_OF_DOCUMENT_TOKEN_TO_BE_REPLACED 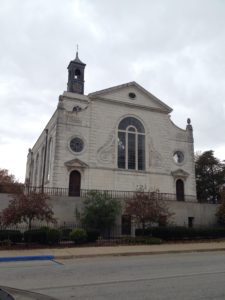 Westminster College is significant as Winston Churchill gave his “Iron Curtain” speech here in the 1946. Presidents Reagan and Trump spoke here, as did the late Prime Minister Margaret Thatcher.

"The United States must seek partnerships not just between
governments, but between peoples." – @SenSanders #BernieFP pic.twitter.com/IoDwwCoR9f

The auditorium was full, about 1300 people, not counting the faculty, students, and Bernie on the platform.

Today is also International Peace Day, so another reason this speech will be significant. #PeaceDay2017 is already trending on Twitter.

Here's a look at the crowd gathered to listen to Bernie Sanders' foreign policy speech at Westminster College this morning pic.twitter.com/ImJthNEPYa

Update: here’s a recording, courtesy of Dose of Dissonance.

Common Dreams has the prepared speech in its entirety, “The World’s Common Humanity & US Foreign Policy“. as does Vox.

Keep discussing though! Speech may be over, but lots of food for thought in this speech!

135,000 Senegalese troops fought in Europe during World War I and over 30,000 died. De Gaulle’s Free French Army in World War II was largely composed of troops from the French colonial empire, including conscripts and volunteersfrom among the colonized populations. The Nazis executed several thousand French colonial POWs from Africa, based on their racial animus towards black peoples. Over a million Indian troops served overseas during World War I. Undivided India (most of India, Pakistan, Bangladesh and Nepal) was part of the British Empire at the time. During World War II, the Indian Army expanded to include 2.5 million troops in uniform. … END_OF_DOCUMENT_TOKEN_TO_BE_REPLACED

This guy is great. Why a 94-year-old war veteran started a podcast to save democracy Harry Leslie Smith is deeply disturbed at how democracy has become endangered. He’s convinced young people can be the planet’s salvation – and he’s reaching out to them one podcast at a time “We are at a dangerous crossroads for society and democracy,” Mr. Smith said…“I believe the world is in just as dangerous a state as it was when I was a teen, watching democracy dissolve all across Europe.” He was having a bit of trouble catching his breath, and paused before his next sentence: … END_OF_DOCUMENT_TOKEN_TO_BE_REPLACED

We have been at war in Afghanistan for almost 16 years now, and for much of that time, it’s been two steps forward and three steps back. This week, we went three steps back as ISIS captured the mountain fortress of Tora Bora. The ISIS forces in Afghanistan include the remnants of Al-Qaeda. Tora Bora is where Bin-Laden went immediately after 9/11. It’s a large complex with miles of tunnels, roads and caves dug into granite mountains. If you think this is only two steps back, recall that Tora Bora was originally built with funding from the CIA. The CIA helped build this … END_OF_DOCUMENT_TOKEN_TO_BE_REPLACED

Mayor Landrieu’s speech concerning the removal of Confederate monuments deserves a lot more attention because it really is quite an excellent speech. It is being compared to LBJ’s commencement address at Howard as a clear-eyed exposition on racism and white supremacy by a white politician. The soul of our beloved City is deeply rooted in a history that has evolved over thousands of years; rooted in a diverse people who have been here together every step of the way—for both good and for ill. It is a history that holds in its heart the stories of Native Americans—the Choctaw, Houma Nation, the Chitimacha. Of Hernando de … END_OF_DOCUMENT_TOKEN_TO_BE_REPLACED

Happy Weekend Everyone! How are my friends here doing on this lovely (but cool) Saturday? I have two things to contribute before getting back at chores, baking, and all that weekend stuff. I’m sure you heard that Chelsea Manning was sentenced to some solitary confinement time for attempting suicide (like that’ll be helpful to a suicidal person), but I only learned today that the other punishable offense Chelsea was dinged for was……being found in possession of an objectionable book! I read that hours ago and am still somewhat amazed. Manning also faced a Prohibited Property charge as a result of an improperly … END_OF_DOCUMENT_TOKEN_TO_BE_REPLACED

Happy Saturday Peeps! So let’s first address the elephant…I mean donkey, in the room – “basket of deplorables”?? I think it was a stupid thing to say if you’re trying to win an election. Last night, when I heard that at her fundraiser with Barbra Streisand, Clinton said to laughter: “To just be grossly generalistic, you can put half of Trump supporters into what I call the basket of deplorables,” Clinton said. “Right? Racist, sexist, homophobic, xenophobic, Islamaphobic, you name it.” Nice. Insult a big chunk of voters. I thought liberals were supposed to be caring people, people who often went the … END_OF_DOCUMENT_TOKEN_TO_BE_REPLACED