Secretary of State Mike Pompeo, speaking in Jordan at the end of a four-day, four-nation tour through the Middle East, expressed support on Monday for Israel and its response to weekly protests in Gaza that have left dozens of people dead. “We do believe the Israelis have the right to defend themselves, and we’re fully supportive of that,” he said at a news conference with Ayman Safadi, the Jordanian foreign minister, when asked about the protests. — www.nytimes.com/… Let us be clear, what Pompeo called “defense” was a nuclear-armed state sending young men and women to shoot at protesters in Gaza, … END_OF_DOCUMENT_TOKEN_TO_BE_REPLACED

The United States for a second week in a row blocked a UN Security Council statement supporting the right of Palestinians to “demonstrate peacefully” and endorsing Secretary-General Antonio Guterres’ call for an independent investigation into deadly protests in Gaza. Palestinian UN Ambassador Riyad Mansour told reporters at UN headquarters in New York on Friday evening that 14 of the 15 council nations agreed to the statement, but the United States, Israel’s closest ally, objected. — www.timesofisrael.com/… Nikki Haley’s move to block a recognition of Palestinian’s rights was opposed by the Palestinian ambassador to the UN. Trump’s mid-east envoy, Jason Greenblatt said … END_OF_DOCUMENT_TOKEN_TO_BE_REPLACED

The New York Times’ Jerusalem bureau chief, David Halbfinger has a lengthy article about how recent Trump administration and Israeli actions have led Palestinians to more seriously consider changing their position to advocate for a single state with equal rights for all. It’s titled: As a 2-State Solution Loses Steam, a 1-State Plan Gains Traction: The Israeli right, emboldened by President Trump’s recognition of Jerusalem as Israel’s capital, is not the only faction arguing for a single state between the Jordan River and the Mediterranean Sea. The Palestine Liberation Organization has also begun to ask whether that might not be such a bad … END_OF_DOCUMENT_TOKEN_TO_BE_REPLACED

Senate bill 720 seeks to criminalize speech supporting a boycott of Israel. The bill is meant to target the growing BDS movement. Boycott, Divestment, Sanctions (BDS) is a Palestinian-led movement for freedom, justice and equality. BDS upholds the simple principle that Palestinians are entitled to the same rights as the rest of humanity. Inspired by the South African anti-apartheid movement, the BDS call urges action to pressure Israel to comply with international law. This anti-boycott bill is part of a long tradition that seeks to undermine labor, civil rights and liberation movements employing non-violent protest. I’ll explore the history of anti-boycott laws … END_OF_DOCUMENT_TOKEN_TO_BE_REPLACED

Palestinians have lived for 50 years under a military occupation by a foreign government and there are no signs this will end anytime soon. The Israeli government has been busily dispossessing Palestinians as individuals and as a nation of land and resources. Three generations of Palestinians have lived the bulk of their lives (five decades) with their human and civil rights curtailed by the Israeli government. The Trump administration believes the UN is “bullying” Israel by condemning these policies: [US Ambassador to the UN, Nikki] Haley arrived in Israel to a hero’s welcome one day after warning that the United States might pull out of … END_OF_DOCUMENT_TOKEN_TO_BE_REPLACED

The five-minute video was set to be screened at a conference Sunday marking the end of the Six-Day War in 1967 and “50 years of Occupation.”

In opening the video, Sanders, a Jewish Independent who sought the Democratic presidential nomination, called Meretz, which currently has 5 seats in Israel’s 120-seat Knesset, “Israel’s most prominent political organization.” He added that the party stands “for many of the same values that progressives are fighting for here in the United States and throughout the world.”

“We are now in the 50th year of Israel’s occupation, an occupation which denies basic Palestinian rights while failing to deliver Israel real security,” said Sanders.

“I know so many of you agree with me when I say: this occupation must end. Peace, real peace, means security not only for every Israeli, but for every Palestinian. It means supporting self-determination, civil rights and economic well-being for both peoples.”

Sanders called for “a politics of solidarity and a common humanity” and added that “brave people uniting around a common set of values with clear goals, can change a country, they can change the world, they can even change the Israeli-Palestinian conflict.”

More news/video/etc. in the comments, See you there!

As the 50th anniversary of Israel’s occupation of the West Bank, Jerusalem and Gaza approaches, there will be several lengthy retrospectives. One of the better ones was, surprisingly, published by the NY Times today. Nathan Thrall is a senior analyst at the International Crisis Group. He’s also the author of “The Only Language They Understand: Forcing Compromise in Israel and Palestine.” he makes a persuasive case that the Israeli occupation is on track to run another 50 years, aided and abetted by the US. The widely held misconception that the occupation is unsustainable and prone to collapse any minute now, under the weight … END_OF_DOCUMENT_TOKEN_TO_BE_REPLACED 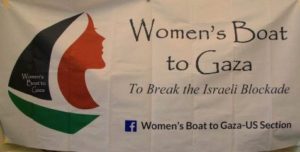 By Vyara Gylsen at Global Research: Centre for Research on Globalization :: A group of women from all over the world [embarked yesterday] on a dangerous journey on board the Women’s Boat to Gaza (WBG). Two vessels [left] from Barcelona on 14 September with the goal of reaching the besieged Palestinian enclave by early October in a symbolic breaking of the Israeli-Egyptian blockade. One of these women is Zohar Chamberlain Regev, an Israeli citizen who was born and raised in Kibbutz Kfar Hahoresh, near Nazareth. She has been living in Spain for the past 12 years and has been involved in the Spanish component … END_OF_DOCUMENT_TOKEN_TO_BE_REPLACED