Some good articles on The Nation today related to 9/11.

In the 18 years since 9/11, war has become this country’s permanent condition, with no peaceful end in sight.

This September 11 marks the 18th year since hijackers seized four US airliners, plowing three of them into the World Trade Center and the Pentagon and the fourth into a field in southern Pennsylvania. The attacks killed nearly 3,000 people and deranged our national politics. In the fraught months that followed, US leaders declared one war after another, miring this country in conflicts from Central Asia to the Middle East. There is still no end in sight.

The longest of these conflicts—in fact, the longest war in US history—is the one that George W. Bush launched against the Taliban less than a month after 9/11. He called it “Operation Enduring Freedom” and claimed its mission was “to disrupt the use of Afghanistan as a terrorist base of operations and to attack the military capability of the Taliban regime.” He spoke of “freedom.” He trumpeted the “generosity” America would show the Afghan people. But many of us knew what this really was: a war of vengeance, waged against an impoverished country some 7,000 miles away, with no meaningful vision for peace.

But far too many people just went along with it.

Wars without end expand the prerogatives of the president and the budgets of the national security state. Presidents from both parties have repeatedly invoked the post-9/11 Authorization for Use of Military Force to dispatch troops across the globe. In today’s dollars, the Pentagon’s budget now exceeds its levels at the height of the Cold War.

Forever war is an affront to our Constitution. The founders, worried that the executive had an inherent propensity for war, gave the power to declare it to Congress, believing that this decision should be made only by the people’s representatives after debate and deliberation. Now, war is our permanent condition, and Congress has essentially abandoned its constitutional responsibilities.

Who will have the guts to change this “condition”? I can think of one person who might fit that bill.

Here is a shot of energy drink to help you through your day.

My wish for Memorial Day is having less people to memorialize.

We’re still sending troops into harm’s way under an authorization passed right after 9/11.

Bush invoked the AUMF on 18 occasions and Obama invoked it on 19, to justify action against terrorists—though many of them had nothing to do with 9/11 and some did not even exist at the time. The Trump administration has also cited the AUMF to argue that U.S. troops can stay in Syria without any new authorization from Congress.

This argument originated with Obama. In 2014, a “senior administration official” laid out the case in an email to the New York Times. The official argued that the AUMF justified military operations against ISIS in Syria because the Islamic State—as the group was also known—had a “longstanding relationship with al-Qaida” and because its leaders regarded ISIS as “the true inheritor of Osama bin Laden’s legacy.” Therefore, the president could rely on the AUMF as authority for the use of force against ISIS, “notwithstanding the recent public split” between ISIS and al-Qaida’s senior leadership.

As the Bipartisan Policy Center observed in an analysis of the law’s history, “Critics of the expansive use of AUMF argue that the last sentence”—noting the split between ISIS and al-Qaida—“is most telling.” The analysis added: “Though ISIS came into being as Al-Qaeda in Iraq (AQI), it was disavowed by al-Qaeda leader Ayman al-Zawahiri in February 2014. … Furthermore, ISIS did not come into being until 2004—three years after the AUMF’s passage.”

In other words, the notion that the president has presumptive authority to keep troops in Syria or any other country—other than Afghanistan—has a flimsy foundation.

On Tuesday, the House Appropriations Committee approved a bipartisan amendment that would repeal the AUMF and give Congress eight months to draft new legislation addressing the ongoing wars.

the move to repeal or revise the law doesn’t necessarily mean that Congress will resist Trump’s—or any other president’s—march toward war. According to the Congressional Research Service study, on the 19 occasions when Obama mentioned the AUMF in reports to Congress on the use of force, he often emphasized his executive authority under Article II of the Constitution, noting almost in passing that his decision was also “consistent with” the AUMF. He was reporting the military operations to Congress, as required by the War Powers Act—which gives Congress 60 days to vote against a military operation, if it so desires. There was never a vote—nor did anybody expect one.

Will this time be different?

The truth is, whatever the fate of AUMF, most members of Congress don’t want the responsibility of going to war—or of stopping a war from happening. They would rather let the president, even a president they don’t much like, take the heat.

The bill reflects House Democrats’ desire to curtail Trump’s recent moves in foreign policy and along the border, most notably through Rep. Barbara Lee’s (D-Calif.) amendment to retire the 2001 authorization for the use of military force (AUMF). The provision would sunset the AUMF – used as legal justification for military operations against terrorist groups 41 times in 18 countries since it was passed – eight months after the bill is enacted, giving Congress time to debate and vote on a new AUMF.

The AUMF debate comes as Trump has threatened Iran with military force.

But GOP lawmakers argued ending the current war authorization without a new one already approved could hamper military operations.

“I can think of few things more dangerous and ill-conceived than removing a fundamental underpinning for US military operations without having consensus agreement on what is to replace it,” said the Defense subcommittee’s ranking member, Rep. Kay Granger (R-Texas).

Oh, and I hope you all are having an excellent Memorial Day!

I’m heading outside, but I hope to check in later. Please share whatever’s on your mind below. 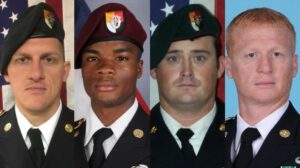 Walk down any street in the US and ask people about Tongo, Tongo, Niger, you will get blank stares. Ask them about what happened in Yakla, Yemen and you will get confused looks. Now, ask them about “Benghazi” and you’ll get an immediate reaction. Why is that? Because Republicans took the attacks on two US compounds in Benghazi, Libya and held a hundred hearings about it, they made it part of the conversation. They made it news. To the point where there were books and movies made about it. Trey Gowdy practically made a career out of chairing one sub-committee. Americans … END_OF_DOCUMENT_TOKEN_TO_BE_REPLACED

Last night, Republicans blocked my amendment to the #FY19NDAA that would stop the U.S. from refueling Saudi-led coalition jets bombing civilians in Yemen. They argued that our alliance with the Saudi monarchy meant we needed to overlook their war crimes in Yemen. I disagree. pic.twitter.com/jfTNfct1PF

For your reference, here is a list of all of the House Representatives, sorted by name.

Here is a list of off of the Members of the Armed Services Committee, sorted by party.

We need to do something to help Yemen. I very much appreciate Rep. Ro Khanna’s efforts on Yemen’s behalf.

Secretary of State Mike Pompeo, speaking in Jordan at the end of a four-day, four-nation tour through the Middle East, expressed support on Monday for Israel and its response to weekly protests in Gaza that have left dozens of people dead. “We do believe the Israelis have the right to defend themselves, and we’re fully supportive of that,” he said at a news conference with Ayman Safadi, the Jordanian foreign minister, when asked about the protests. — www.nytimes.com/… Let us be clear, what Pompeo called “defense” was a nuclear-armed state sending young men and women to shoot at protesters in Gaza, … END_OF_DOCUMENT_TOKEN_TO_BE_REPLACED

I’d like to share a short piece profiling recurring protests in Okinawa simply called, ‘On Hope’. On December 26th, 2017, protesters in Henoko, Okinawa, Japan reached their 5000th day of protest against the ongoing presence of the U.S military. With over 500 protesters, the people of Okinawa continued their fight against U.S. military occupation. I didn’t know that Okinawa used to be independent of Japan. Transferred from one imperial power to another, Okinawa represents a forgotten space of colonial conquest. Once the independent Ryukyu Kingdom, it was annexed by Japan in 1879. A brutal program of cultural and linguistic assimilation … END_OF_DOCUMENT_TOKEN_TO_BE_REPLACED

We have watched this president, like so many before him, drop bombs and hurl missiles at different countries in Asia and Africa. The picture below of US missiles striking Damascus would be perfectly at home in a Hollywood blockbuster about an technologically-advanced alien civilization attacking a human society with less firepower. Few of these movies ever explore what is going on back home in these alien societies. Do their leaders starve their bug-eyed young of resources in learning, so they have more pliable cannon fodder? Do their military-industrial-complexes have bug-shaped lobbyists who ease the path to war, knowing there are billions to be … END_OF_DOCUMENT_TOKEN_TO_BE_REPLACED