As it becomes clear that the eventual Democratic nominee will run on Medicare For All, we can expect the policy to be attacked by the concentrated interests who benefit from our current, broken system. The NYT is right there to lend a hand, with a news (not opinion) piece carrying a scary title:

Medicare for All Would Abolish Private Insurance. ‘There’s No Precedent in American History.’

Such a change would shake the entire health care system, which makes up a fifth of the United States economy, as hospitals, doctors, nursing homes and pharmaceutical companies would have to adapt to a new set of rules. Most Americans would have a new insurer — the federal government — and many would find the health insurance stocks in their retirement portfolios much less valuable. […]

While the bills would give relief to insurance industry workers, they would provide no such compensation for investors. — www.nytimes.com/…

The NYT is so unaware of its own biases, they unthinkingly state them upfront. The authors make no bones about the fact that their primary and sole concern is insurer stock prices and investors.

Nowhere do the authors talk about patients, quality of care, or providing health care for everyone. Such things are furthest from their minds. Their only concern is for investors and insurance companies. They quickly dismiss the bills’ provision for workers, after all, they’re only “workers”. Compensation for investors is their primary concern.

Since it’s the NYT, the authors can’t even keep their story straight. They start off by concern trolling about “doing away with an entire industry”, yet two paragraphs later they say the closest analog to the proposed system is Canada, where private health insurers continue to provide supplemental policies, something every M4A proponent has said will be possible. Apparently, we are to be suspicious of M4A because it goes beyond the Canadian system to cover dental-care and prescription drugs.

That would be a good place to discuss how lack of timely dental care leads to enormous health implications, or how exploitative prescription drug makers have become in our current system. Or perhaps say a few words about the impact that worrying about health care has on communities and families.

Nope, all that is immaterial, the only concern worth discussing is that of investors. Tellingly, the authors use the terms “Americans” and “retirement portfolios” when referring to investors. This is done without any qualification, to imply that all Americans have a stake in the stock price of insurers. What they neglect to mention is this. The wealthiest 10% of Americans control 84% of the stock market, as their NYT colleagues explained a few months ago.

A whopping 84 percent of all stocks owned by Americans belong to the wealthiest 10 percent of households. And that includes everyone’s stakes in pension plans, 401(k)’s and individual retirement accounts, as well as trust funds, mutual funds and college savings programs like 529 plans. — www.nytimes.com/…

The 99% do require healthcare, but the NYT is too busy carefully analyzing the impact on investor portfolios to care about something as insignificant as the health or bodies or worries of the 99%.

This hierarchy of concerns is why they provide competing claims about the cost of M4A, but fail to mention the millions of people who will have healthcare for the first time. The discussion is purely “cost”, never benefit.

The best bit is that after concern trolling for several paragraphs, the authors of this “news” article admit that insurers will survive anyways!

The effective takeover of the health insurance industry in the United States would mean a huge hit to the companies’ stocks, although the companies, which have additional lines of business, would most likely survive. […]

“Private plans have been able to evolve and test new models more quickly,” said Caroline Pearson, a senior vice president at NORC, a research organization at the University of Chicago. “The political process slows things down.”— www.nytimes.com/…

So hold on, what was all the panicky nonsense above for? Will this kill insurers or not? Make up your damn mind! And let me get this straight, private plans are good because companies are quick to adapt. But somehow they won’t be able to adapt their way into new markets? This is transparent nonsense.

Even worse is what the authors leave unsaid, why these insurers “evolve and test new models”. Thankfully, there was room for one Bernie quote, and he makes clear what’s going on here.

That’s buried in the middle, while the last word goes to an insurance industry executive who closes with some more concern trolling about how difficult it will be to replace the “infrastructure” of private health insurers. Medicare and Medicaid already cover over 110 million people ,and M4A envisages a steady ramp up. Most of the health insurance “infrastructure” this executive is talking about was built to deny care and reimbursements, because that’s what their incentives are.

All the ingenuity and talent held in the health insurance industry is presently committed to extracting profits out of patients and medical care providers. Universal, single-payer coverage will change that “infrastructure”. Rather than finding the best way to maximize premiums and minimize reimbursements to doctors, that talent might be redirected towards improving care.

NYT readers are demolishing the paper’s concern-trolling, sadly their responses will never get as much play as the article itself. Here’s one of the best:

There are plenty of precedents in our history of the a government providing a service that wipes out a private industry. Here is one:

In colonial Philadelphia, there was no fire department. Each fire insurance company had its own private fire department. When you bought insurance, you got a medallion to put on your house. If a fire truck from the Green Tree company came to a burning house that had a Penn Mutual medallion, they would let it burn to the ground. After this happened a few times, a municipal fire department was established, a socialized fire department.

There is a staggering amount of hypocrisy required to write and publish articles like this one. Corey Robin does a great job explaining how this duplicity has lead to bad outcomes over and over again:

During the 90s, the influencers said millions of lost jobs for the sake of free trade and globalization were worth it. Now, they tell us the loss of several hundred thousand jobs in the insurance industry for the sake of Medicare For All is intolerable. pic.twitter.com/krGH9kdHgC

Pretty much everyone who’s concern trolling about “one-sixth” or “one-fifth” of the economy were unconcerned when we went to war in Iraq or when various trade deals were proposed. Then, the costs were hand-waved away. Of course, those costs were socialized. Workers and soldiers drawn from poorer households paid the price. The Bushes and Cheneys and Trumps of our world got fat on war and globalization.

We spend more than any other nation on health-care, and our outcomes are worse. The system we have simply does not work for most of us. It leads to lower life expectancy at higher costs, as illustrated below. 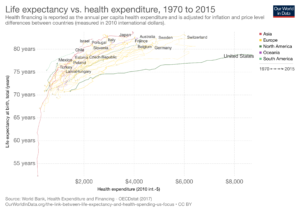 Universal, single-payer healthcare would have an enormous positive impact on the material and physical well-being of the vast majority of Americans. In stark contrast, a change in the stock prices of health insurers would not impact any except a small sliver of relatively wealthy Americans.

Given those facts, we should expect bad faith attacks on Medicare For All to accelerate. Whenever you hear these attacks, a rule of thumb is to think about what’s in the 99%’s best interest.

Do we want a system that works for all of us, or only for a few?

By now, not surprised at NYT

Some excellent work, but need to stay close to power and money

Except, the genie has been let out of the bottle and the establishment will have a hard time controlling it

This article involves mostly property damage from climate change, but health is also related to climate change along with immigration, etc.

If we don’t have a civil war before then

Infuriating. The NYT, a supposedly decent news organization, continues to try and keep public opinion in a small, conservative box, in the name of being “realistic” or “pragmatic.” Such attempts would be laughable, if they didn’t do harm by influencing so many damned people.

And here’s the WaPo editorial board going after Bernie and M4A a few days ago. According to the Post, M4A simultaneously will be wildly expensive and willcause massive cuts in health services. Sources the deficit hawk Committee for a Responsible Federal Budget and its own very unbiased Fact Checker.

Awesome. Shared on teh Tweeter.

Matt has a lot of good threads on M4A.

We will defend the ACA. We will protect the care of those whose lives depend on it. And we will get to universal, guaranteed, high-quality health care for every woman, every man, every child in this country. https://t.co/PT3QH9Gapc

I would like to know which pollsters keep pushing this meme. People have access to quality healthcare but they can’t afford it.

Thank you Subir! You just keep getting better and better.

But, we have a much bigger problem than just the NYT:

The Washington Post reported today that during a meeting with freshman House Democrats last night, former president Barack Obama “gently warned” attendees about “the costs associated with some liberal ideas popular in their ranks.” Though he wasn’t specific, “some people in the room took his words as a cautionary note about Medicare for All and the Green New Deal,”according to the paper:

People in the room, who spoke on the condition of anonymity to describe the evening, said Obama’s cost warnings weren’t deficit-scolding, per se. Rather he argued that voters care about the costs associated with policies and that Democrats should be ready to answer questions about how they will pay for an idea while making big promises to constituents.

Obama gave the example of taxes: Even a liberal, he argued, could be repelled from supporting a liberal policy if it’s accompanied by a major tax cut to their own bottom line.

Here, we have a meta-version of the centrists’ refrain: “It’s a nice idea, but how will you pay for it?” Obama didn’t say that—he merely asked how Democrats to think about how they will explain to voters how they’ll pay for it. See? He’s not a “deficit scold,” as some “people in the room” told the Post. He’s just asking questions.

But he’s asking the wrong question, at least when it comes to Medicare for All. On that proposal, the question for voters isn’t how the federal government will “pay for it,” but how their individual share of their health expenditures will change. And by that measure, Medicare for All is a slam dunk.

Questions of how the government will afford things are arbitrarily applied by moderates and conservatives to oppose programs they don’t want, and never seem to apply to defense spending. But federal government and deficit questions are far removed from the lives of individual Americans; what really matters, to most of them, is their bottom line. That doesn’t mean that zero voters care about deficits or government spending, but it does mean that voters at large will be more amenable to arguments focused on their own spending. And it’s inarguable that current household spending on healthcare is at crisis level, a crisis that would be solved by Medicare for All.

Those who own/control the media are obviously a huge problem, but what will we do about the centrists in the Democratic party??