↓
Home→Uncategorized→Democracy in Bolivia thanks to the CIA, the OAS and the State Department

I am creating a separate thread to bring attention to what is happening in bolivia since you will not see anything like this in the MSM. Hopefully it gets the attention that it deserves.

The Bolivian opposition, @OAS_official, US government and mainstream media manufactured a phony narrative of election fraud, setting the stage for the fascist coup against @evoespueblo. I explain how it happened: pic.twitter.com/896eBBRgXG

National Nurses United (NNU) today joined with the AFL-CIO, international labor leaders, and other activists in condemning the military coup in Bolivia and urging an end to political repression and violence.

Additionally, NNU also supports calls for restoration of democracy and a fair electoral process, including deposed former Bolivian President Evo Morales; and international solidarity for former ministers, their families, and supporters who have faced attacks or threats.

“We are alarmed by scenes of military intervention in the governance of Bolivia, arrests and acts of violence committed against supporters of the former Morales government, and racial attacks on indigenous peoples of Bolivia that have been seen across social media,” said NNU President Deborah Burger, RN.

“As nurses we have concerns for the health and safety of all Bolivian people, and urge an immediate, peaceful resolution that protects the rights and security of all Bolivians,” Burger said.

Burger said NNU endorses a statement yesterday by AFL-CIO President Trumka who said in a tweet: “The @AFLCIO joins the @ituc @CSA_TUCA in condemning military interference in Bolivia’s election process. Morales reduced widespread poverty and fought for the inclusion of the indigenous majority. Bolivians must be able to vote peacefully and freely in new elections.”

good for Trumpka. i would say Evo should be reinstated, but i guess that ship has sailed.

It started with peaceful protests against the coup

With fascist paramilitiaries working hand in glove with cops & military to violently repress them, their slogans have gotten steadily more militant:

In more it's-totally-not-a-coup news, the self-proclaimed "President" of Bolivia – after seizing power as the left-wing President was sent into exile & warning him he'd be arrested if he returned – cut off relations with Venezuela & expelled Cuban doctors https://t.co/ovXx0J57ai

Bolivian coup leader Luis Fernando Camacho is a far-right multi-millionaire who arose from fascist movements in the Santa Cruz region, where the US has encouraged separatism. He has courted support from Colombia, Brazil, and the Venezuelan opposition.

When Luis Fernando Camacho stormed into Bolivia’s abandoned presidential palace in the hours after President Evo Morales’s sudden November 10 resignation, he revealed to the world a side of the country that stood at stark odds with the plurinational spirit its deposed socialist and Indigenous leader had put forward.

With a Bible in one hand and a national flag in the other, Camacho bowed his head in prayer above the presidential seal, fulfilling his vow to purge his country’s Native heritage from government and “return God to the burned palace.”

“Pachamama will never return to the palace,” declared the pastor to his side, referring to the Andean Mother Earth spirit. “Bolivia belongs to Christ.”

Virtually unknown outside his country, where he had never won a democratic election, Camacho stepped into the void. He is a powerful multi-millionaire named in the Panama Papers, and an ultra-conservative Christian fundamentalist groomed by a fascist paramilitary notorious for its racist violence, with a base in Bolivia’s wealthy separatist region of Santa Cruz.

Camacho hails from a family of corporate elites who have long profited from Bolivia’s plentiful natural gas reserves. And his family lost part of its wealth when Morales nationalized the country’s resources, in order to fund his vast social programs — which cut poverty by 42 percent and extreme poverty by 60 percent.

thanks, humphrey. I know I’ve been out of the loop, but it’s amazing to me how they don’t show these protests. it truly is propaganda and that is terrifying. like the yellow vests. has pbs had anything?

this is how well-meaning, decent people form opinions supporting fascists.

a not too distant neighbor.

As someone who studies urban insurgency & counterinsurgency, this thread tells me that the existing scholarship is useless. https://t.co/bQp8lUCYu7

The lasers used by Protesters are much less dangerous than the 'nonlethal' rounds Riot Police fire at Protesters, deliberately aiming at their faces and eyes

So far 180+ Chileans have been blinded by Police, and 20 have lost their lives pic.twitter.com/Dns5q20QgV

The peaceful protests were soon met with violence by the fascist supporters of the coup aided by the police and the military. 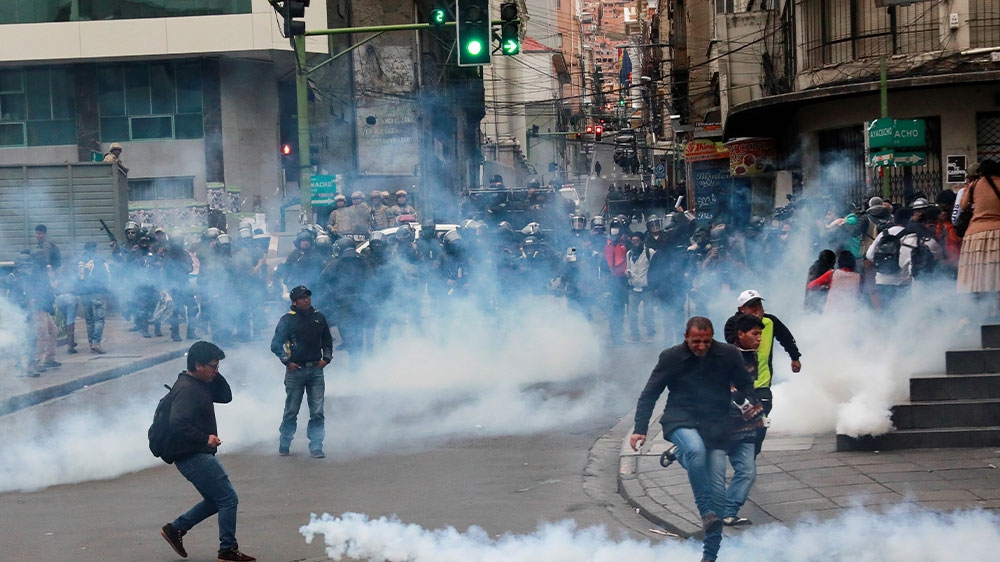 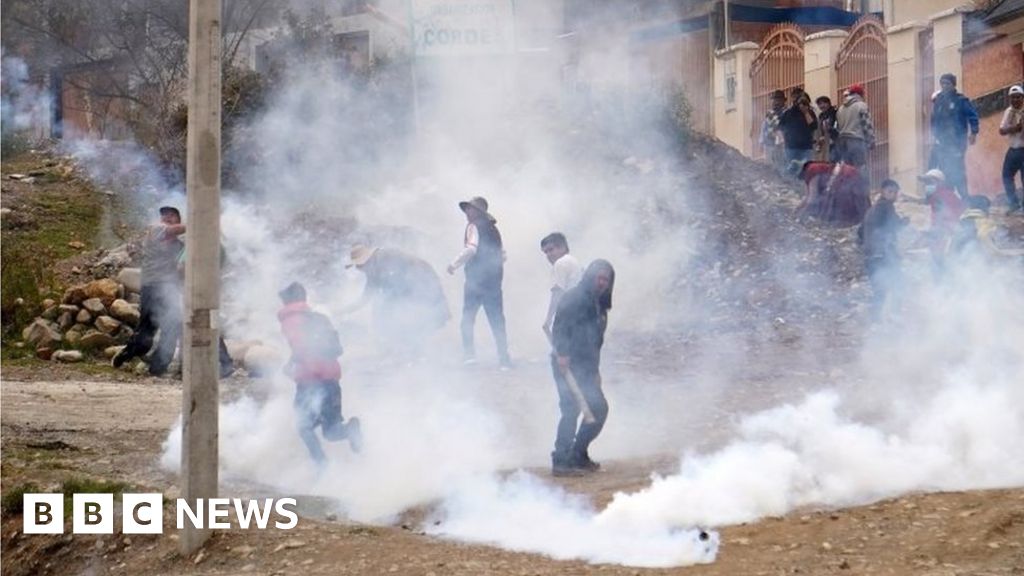 Many of these tweets will be in Spanish but you can see from the images and videos what is taking place!😢

To justify the coup, Mesa and Camacho accused us of “dictatorship.” Now its self-appointed “president” and its cabinet of defense lawyers for rapists and repressors, massacre the people with the Armed Forces and the Police as the true dictatorship. # NoAlGolpeDeEstadoEnBolivia

They shoot in the head without mercy. They mark the houses of leaders of social or indigenous movements and the repression against protesters is terrible. Let’s make these videos viral to raise awareness of the world. There is a coup d’etat.

Body shots of Bolivian peasants. I pulled out. Cochabamba The Criminal Coup Board of Mrs. Añez [ @ JeanineAnez ] and the murderous Army. Responsible for this massacre. Crimes against humanity. @ IACHR @ ONU_es

This is what those who wielded the Bible are doing in Bolivia to execute a coup d’etat. Please, let’s make these videos viral. The world must learn about the massacre carried out by the military and coup police.
# EvoElMundoContigo

Only in the Mexico hospital, in the town of Sacaba in Cochabamba, there are 5 deaths from gunshot wounds, the product of brutal police and military repression. The hospital collapsed by the number of injured, are being referred. Criminal Coup Board in Bolivia.

A reporter covering the events.

La Paz meadow. Bolivia Military gasses a student in the face and strikes until he leaves a citizen in inconsistency. “They don’t deserve the whipala. It’s great that they took it out. Sold.” The people shout at them in fight against the coup in Bolivia.

Yeah, neoliberal Democrats gotta be proud. Such a good thing to be rid of that socialist monster Evo. https://t.co/20EraUP0DZ

Reports of at least 5 killed in anti-coup protests in Bolivia and dozens of severely injured by police/military forceful repression. The de facto regime is engaging in a widespread campaign of terror against indigenous peoples, unions & members of Evo Morales' party, MAS. #Coup https://t.co/h8YCbbSVzv

The worsening situation in Bolivia is alarming.
Instead of supporting the self-proclaimed interim President that has a history of attacking Indigenous people, Canada must condemn the anti-democratic actions that led to this coup and are still getting worse. 1/2 https://t.co/J3D5icekdI

They are fighting back against fascists, the Bolivian army and US imperialism. pic.twitter.com/N8LOWvOyMP

pb4, how can you say that? Seriously, neither you nor I and the rest of the krewe in the TPW nest have failed our country. What saddens me is it’s just the same old, same old pattern. Fundamental extremism, excessive greed, dumbing down, propaganda claiming the same old crap about wanting to learn being a vice. It’s a flaw in homo sapiens. It always claws its way to the top, and we on here know the results. T and R, humphrey!!