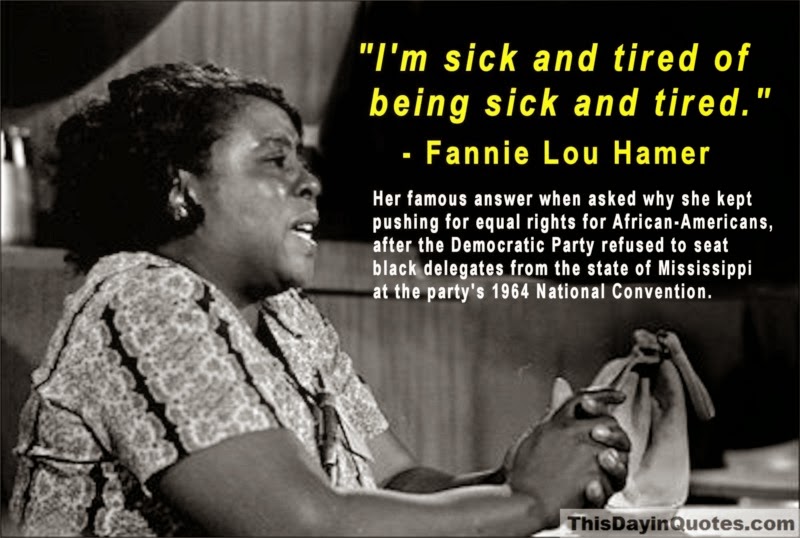 Some History Via Wikipedia

In the summer of 1964, the Mississippi Freedom Democratic Party, or “Freedom Democrats” for short, was organized with the purpose of challenging Mississippi’s all-white and anti-civil rights delegation to the Democratic National Convention, which failed to represent all Mississippians. Hamer was elected Vice-Chair.

The Freedom Democrats’ efforts drew national attention to the plight of blacks in Mississippi, and represented a challenge to President Lyndon B. Johnson, who was seeking the Democratic Party’s nomination for reelection; their success would mean that other Southern delegations, who were already leaning toward Republican challenger Barry Goldwater, would publicly break from the convention’s decision to nominate Johnson — meaning in turn that he would almost certainly lose those states’ electoral votes. Hamer, singing her signature hymns, drew a great deal of attention from the media, enraging Johnson, who referred to her in speaking to his advisors as “that illiterate woman”.

Hamer was invited, along with the rest of the MFDP officers, to address the Convention’s Credentials Committee. She recounted the problems she had encountered in registration, and the ordeal of the jail in Winona. Near tears, she concluded:

In Washington, D.C., President Johnson, fearful of the power of Hamer’s testimony on live television, called an emergency press conference in an effort to divert press coverage.[16][17] The television networks switched to the White House from their coverage of Hamer’s address, believing that Johnson would announce his vice-presidential candidate for the forthcoming November election. Instead, to the bemusement of journalists, he arbitrarily announced the nine-month anniversary of the shooting of Texas governor, John Connally, during the assassination of John F. Kennedy.[18] However, many television networks ran Hamer’s speech unedited on their late news programs. The Credentials Committee received thousands of calls and letters in support of the Freedom Democrats.

Johnson then dispatched several trusted Democratic Party operatives to attempt to negotiate with the Freedom Democrats, including Senator Hubert Humphrey (who was campaigning for the Vice-Presidential nomination), Walter Mondale, and Walter Reuther, as well as J. Edgar Hoover. They suggested a compromise which would give the MFDP two non-voting seats in exchange for other concessions, and secured the endorsement of Martin Luther King, Jr. and the Southern Christian Leadership Conference for the plan. But when Humphrey outlined the compromise, saying that his position on the ticket was at stake, Hamer, invoking her Christian beliefs, sharply rebuked him:

Future negotiations were conducted without Hamer, and the compromise was modified such that the Convention would select the two delegates to be seated “at-large”, with no voting rights. The MFDP rejected the compromise, with Hamer making the famous quote:

In 1968 the MFDP was finally seated, after the Democratic Party adopted a clause which demanded equality of representation from their states’ delegations.[17] In 1972, Hamer was elected as a national party delegate.[21]

Wow. Fannie Lou Hamer could be speaking for lots of us today:

Funny how “that illiterate woman,” as LBJ characterized her, enraged the Democratic establishment then just as many Bernie supporters enrage them now for speaking truth to power.

Yes, sig lines, but you’re here!!! Welcome and so glad to see you.
By the way, for all who I met on TOS, could you explain your usernames? (I’m notorious for misunderstanding such things. Probably the only person on earth who furrowed her brow over what the heck tin yurls were.)
And some folks here are operating under different names here? Can you put your DK handle in your profile?

Lol, you’re not alone – I have no idea what tin yurls are either!

I’ll see what I can do about sig lines! That’s probably easier than some of the other items on my to do list!

Yes! I want my sig line back! Written under it for a decade now.

We have it in our power to begin the world over again. ~ Thomas Paine

Love that now I see that beautiful little bird on my tab for this site! Each and every day there are positive changes here in The Progressive Wing!

After my SS check gets here, a donation is winging its way to our new progressive home!

I know it is not quite the same, but for the time being you can add ‘updates’ to your profile, and it will place the most recent one under your the 5 star rating system thing.. sort of a ‘profile signature’, but alas, havent figured anything out on comments yet (i was reading a lot of help forums at the immigration office!)

Thanks for posting this LD. I was 7 years old in 1964 and didn’t have a solid grasp on the racial or political turmoil that was brewing in our country.

Thank for for posting this LD. I have never understood why white skin means anything. All it means to me is that I got sunstroke many times in England and had to wear long sleeves in the summer (no sun screen then). The only sun tan I ever had was joined up freckles.

I had the great privilege of hearing her speak in 1968. It was a fantastic inspiration.