Skip to toolbar
↓
Home→Uncategorized→For progressives it certainly is a conundrum!

Nobody in their right mind ( that excludes you Joe) wants a second Trump term. The question is what do we do next. 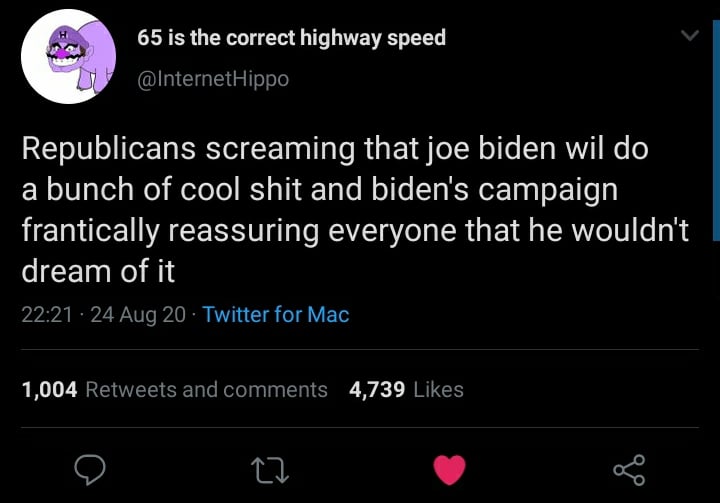 He saw this coming many months ago. Look at the date of the tweet.

Republicans NEVER moderate their message to appeal to Democrats.

Yet centrist Dems ALWAYS moderate their message to appeal to Republicans.

This dynamic has resulted in America being dragged so far to the right that we’re tipping into the Atlantic ocean.

Your thoughts are appreciated. That means for or against.🤔

Worse than that, the second a moderate attains office they start to triangulate. And that always means compromise to the right.

I guess that makes moderates pretty Republican, doesn’t it?

Krystal Ball and Saagar Enjeti give their take on Nina Turner’s CNN appearance discussing the DNC Convention and reports that producers were urging Anderson Cooper to “get her off” the air.

what twitter does best is give you a heightened awareness of the absurdity of US politics. Americans don't even think about policies, politicians are just brands they choose based on gimmicks, how feed their nostalgia, or if they're endorsed by their fav paid celebrities. https://t.co/l7AppbPVTe

Is this real? Please, I refuse to believe my lying eyes. This is a joke, no?

The Reagan Bush version is a bargain though, only $22.99.

To be fair, though, there are many other styles of Biden Harris apparel, none of which I would be caught dead in.

Ah yes, and a retro away we go!

Time for some shut eye. It is your turn to weigh in.😁

I welcome this discussion. It’s definitely a conundrum as Humphrey suggests. And for more reasons I’m about to lay out here, I vacillate each day about a protest vote and whom would notice it other than the Nest (by self disclosure)?

The positives (tempered though) in our current political climate:

1) CNN is still having progressive voices on TV (but how long will that last – if Trump wins, they will be on, if Biden wins, only once a month, probably on a Saturday night on Van Jones show). What we don’t know either is if Rising from The Hill TV will survive after January 2021.

2) Twitter has been a big grab bag, more strategic this cycle than in the past 4 cycles. It’s almost shocking how it became a real citizen journalist tool; that was supposed to be in the media realm of blogs such as TOP, DU, and back in the early 2000’s, a partisan place of communities as each candidate had a blog with followers and contributors, although they pols drove the content. That got more decentralized in 2007 because of twitter and FB.

We get stuff on twitter now about events that would have been buried in the transaction logs of police reports. Now with the ubiquity of smartphones and required body cams, we are getting more of the picture when it comes to social justice in our country.

Yet our politicians, on the whole, aren’t responding by voting up or down on various legislation that makes it out of committee. Just ask Mitch McConnell and Nancy Pelosi.

3) Progressives are making progress, I see progress more via DSA, WFP, and other alliances on state and local levels. KY is a poor state and votes for conservatives but look at the governor. He’s a blue dog, but I’m convinced progressives have empowered him and other blue-state governors (except NY) to be bolder in their actions regarding COVID. Although as Bernie says, our progress could be in jeopardy if Biden doesn’t win. Which means it’s still a bit fragile in keeping it together. I like Bernie’s approach of the inside working out, with Jayapal, AOC/Squad, Pocan (despite his affinity with Joe K) and Nina’s – the outside working outside to keep it real and her alliance with Winifred. Ideas on how important it is to support the down ballots. We need more DA’s and AGs like Larry Kraemer and Keith Ellison, respectively.

4) The Republican Party is the Trumplicans. The Democratic Party is the Demorepublicans, and the Progressives, are the progressives. Any neoliberal who thinks they are progressive is quite mistaken if they can’t agree on a fairer tax code because how it affects the shrinking middle class and PoC. They can try to claim to be progressive. But we know they aren’t because they too got conned by technocrats.

That last bit is the one I am chewing on the most. Why? Because I know I have two way outs already because I live in a safe blue state. I can choose to vote third party if I wish or leave it blank. I exercised the former option in 2016 as it was a protest vote against both parties (and honestly, I thought the baroness was going to win). Mark Charles may get my vote, but I’m not there yet. I’m still in NOTA mode.

I’m out of the reassurance that my vote could accomplish what matters to me the most: seeing have a replacement as equally committed to justice as the Notorious RGB. She has been a stellar champion and we owe her a good retirement!

But maybe Biden might be the one to leave one good legacy, just as the Clintons did with RGB. As mentioned, I’m not assured. Anita Hill is still seared in my memory.

It’s hard out there being a progressive, as Nina indicated on CNN. We have two slay two dragons and unfortunately, two arenas are exhausting. A vote for Biden is a true vote against Trump. But I don’t buy it either that voting for Mark Charles is a vote for fascism anymore than Dr. Jill Biden would be the next Eleanor Roosevelt.

The abusive relationship between corporate Democrats and the left, in under a minute pic.twitter.com/RTsYQsLZt7

I’m still a NOTA even though Wi is a swing state. I’m sick of the lesser of two evils BS