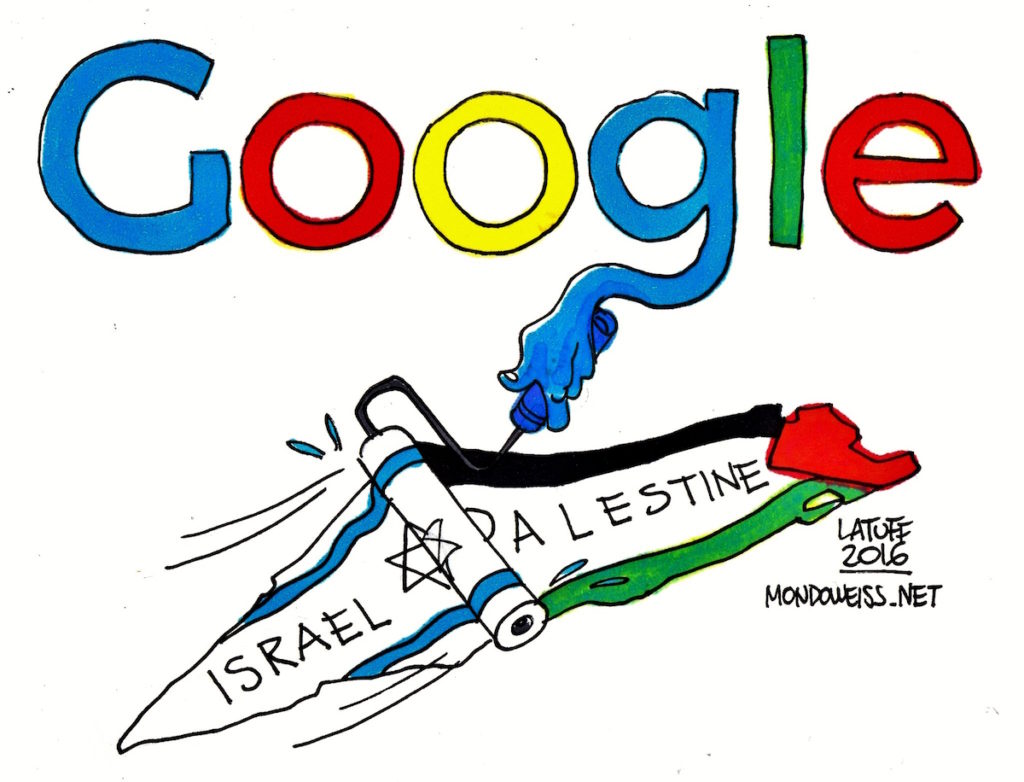 by Wilson Dizard at Mondoweiss.net ::

Google blames a malfunction for removing the terms “West Bank” and “Gaza Strip” from its map of Israel and the occupied Palestinian territory.

“There has never been a ‘Palestine’ label on Google Maps, however we discovered a bug that removed the labels for ‘West Bank’ and ‘Gaza Strip’. We’re working quickly to bring these labels back to the area,” said a Google spokesperson in an email to Mondoweiss.

The bug Google blames for the erasure of the labels set off a wave of outraged Tweets and Facebook posts in the last several days, although the deletion reportedly occurred as early as July 25th. The Palestinian Journalists Forum issued a widely circulated denouncement of the removal.

“The move is also designed to falsify history, and geography as well as the Palestinian people’s right to their homeland, and a failed attempt to tamper with the memory of Palestinians and Arabs as well as the world,” the PJF said, according to Turkish Radio Television (TRT).

Andrew Kadi, a co-chair of the U.S. Campaign to End the Occupation, told Mondoweiss that he feels Google is part of the problem when it comes to recognizing the occupation. Although the United States and United Nations have repeatedly in the past declared Israel’s military to be an occupying force in the West Bank and Gaza Strip, that obvious declaration has fallen out of style. Google’s omission of the word makes this amnesia possible.

“I just searched Palestine on Google Maps and it brings up Israel basically. Israel is labelled like Israel, like lots of different parts of what is now recognized as Israel, but you do not have a label that clearly states that the Golan Heights is occupied. You don’t have anything that clearly states that the West Bank is occupied. Although you have the Green Line you have nothing that indicates that East Jerusalem is militarily occupied. And these aren’t my definitions, these are the international definitions, recognized by every country including the U.S. So it’s odd,” Kadi said.

The debate over Google’s alleged bug “overlooks that Google has not been correctly labelling these areas correctly anyway.”

Israel’s refusal to make a fair and lasting peace with the Palestinians is the single biggest impediment to a lasting peace in the Middle East. They look at Palestinians the way our ancestors looked at Native Americans. The problem is the world is watching this time. It’s time to end all “aid” to Israel and make them accountable for their actions.

The History of Palestine in 30 Seconds by Amer Zahr

And the crimes against Palestinians continue ….

“People must understand that when there is no water you can not use the bathroom, you can not take a shower, you can not clean the dishes, the house, the clothes … And here the families have five, six, ten members … we are not just two or three people in each house”.

Our well water pump went kaput the other day. No water for two days. It’s amazing how quickly things degrade in a household with no running water! Dishes pile up, laundry piles up, every drop becomes so precious. If you’re lucky, showers at friends/relatives houses, but that takes time and travel expense. You have higher eating expenses as one must rely on more convenience food (it’s hard to rinse raw chicken properly when you’re saving fresh water for drinking).

In no time at all you feel like you’re camping out, you begin to worry about bacteria, and the house begins to feel unclean. And it’s hard to get to work on time because of how everything takes so much longer to do, so less income is generated.

I positioned one hand under my friend’s faucet last night, then moved my other hand to pull the lever, but hesitated. Would any water come out? I pulled the lever, water flowed, and I realized I’d been holding my breath. Ahhhhh, clean, cool water. I felt blessed.

This is the same story (pretty much) that Don posted, but at a different site-it includes some good pictures. I find pics humanize stories. You can see that they’re ‘just like us’.

Not really relevant… actually I guess it really is now that I think about it:

Said like a true sociopath. This is the type of guy who'd beat his girlfriend & tell her it's b/c he "cares a/b her" pic.twitter.com/KqMlc5PrzJ

I am surprised that they didn’t, blame the Russians. That seems to be the excuse de jour!

I think the Google map thing must be related to something I posted previously about Israel being satisfied that 70% of the pro-Palestine accounts have been removed from Twitter and FB. It all seems connected.