Hope this works but figured the cyber-challenged me would post for the krewe.

It worked!! Anyway, hope all my progressive/liberal krewe are enjoying a good Holiday weekend free of floods and fires. 🙂

Hot in IL, but it’s nice to have a 3 day weekend. Thanks for starting the thread, OBF.

I hope to contribute soon but, in the meantime, Happy Labor Day weekend!

Dana Bash sat in for Jake Tapper on SOTU on CNN. Among the guests was Andrew Gillum. Here’s the interview. It lasts about 10 min.

I’ll be curious to your reactions to what and how she asked Gillum about the robo call and MfA.

He doesn’t seem to have a firm grasp on the MFA arguments. imo, OR should be out there with simple rebuttals and explanations to all these candidates.

Actually, I think he does. Bash was being a total asshat, not interested at all in his coalition of gathering states together to study how this could be done on a Federal level and what it would mean for states. Because Bash constantly interrupted with “how do you pay for it” and “will you raise taxes”, he wasn’t allowed to flesh out his ideas.

But it was a good lesson for him that she is only interested in the Establishment and not for progressive ideas. She was a total jerk. I wouldn’t want to work for her or be a producer on her show.

He could have, however, stated that yes, while taxes would rise, personal income would go up because of all the money saved. Stated in a better way than I just did. He tried to say something similar, but was wobbly and Dana was merciless, as you say.

More power to Gillum if he can put together a coalition of states to do this while we’re waiting for a national plan to get through, though!

I know there are many ideas out there for how to do all this, but I’m wondering if the progs shouldn’t get together behind a simple, workable method, such as M4A. Much easier to explain, defend and advocate for during this time of opportunity. And Dana was asking about Bernie’s plan.

Or at least have a conference for M4A type proposals, hash it all out and come out behind the best one. Local officials can still enact local plans, but it’s confusing to be asked to support a multitude of plans just as people are getting behind M4A.

Contrast the interview of Bash vs Chuck Todd on MTP:

Pretty sneaky of you requiring one to view the videos in order to respond to your question.

First of all thanks for providing the videos.

Secondly here is my assessment. Dana had a list of gotcha questions prepared in advance. The trouble is she often did not let Gillum fully respond to them. She kept glancing at her notes often interrupting Gillum before he could answer. It fully seemed that it was a predetermined hit piece interview.

Chuck Todd also had probing questions but at least he gave Gillum the full opportunity to respond.

Gillum handled both interviews quite well and he should be fully supported in the future.

That’s the kind of character Florida needs from its next Governor. https://t.co/WTyUbx0HlV

This might get the dander up for our female members.

A physician in Plano, Texas, is under fire for writing that his female colleagues are paid less because they “do not work as hard,” comments that he has since attempted to walk back.

Tigges was one of several doctors featured in a two-page spread addressing the pay gaps between male and female doctors.

“Yes, there is a pay gap,” Tigges wrote. “Female physicians do not work as hard and do not see as many patients as male physicians.”

“This is because they choose to, or they simply don’t want to be rushed, or they don’t want to work the long hours. Most of the time, their priority is something else…. Family, social, whatever,” he continued.

“Nothing needs to be ‘done’ about this unless female physicians actually want to work harder and put in the hours. If not, they should be paid less. That is fair,” his comments continued

This is certainly not in support of McCain. I liked the ingenuity of the picture. 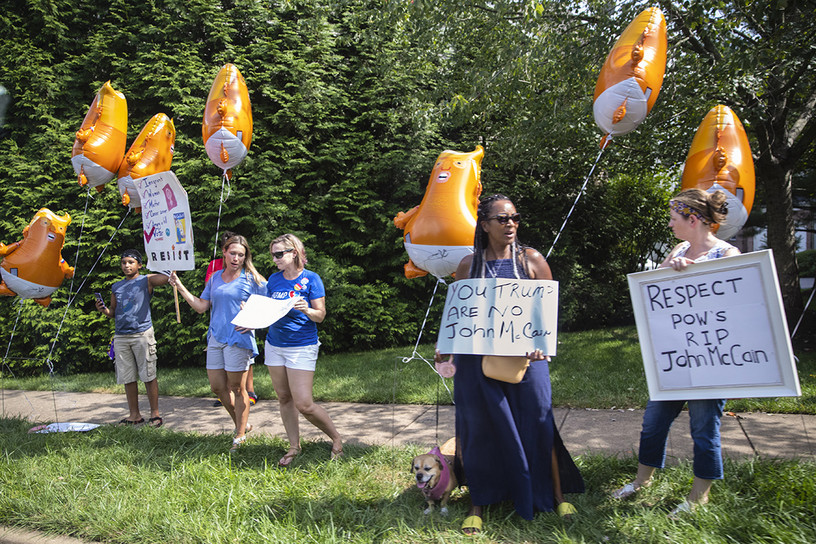 I just love his sarcasm!

We can't just assume election fraud will be enough to stop Bernie.#BookerDeVos2020#KamalaMnuchin2020#BidenWallStreet2020#BrazilePalin2020 pic.twitter.com/SP0XYJxnWz

Bernie, here are a few #SignsTheyreNotIntoYou
🥀You're barely the most popular politician in America
🥀Only 92% of Dems like you

That’s a weird choice for a GIF. DeVito is a Berner.

Minor detail. Nothing to see here.

Kavanaugh, nominated by President Donald Trump, worked in the White House under former President George W. Bush, whose lawyers combed through documents from that time and decided that 27,000 of them were protected under “constitutional privilege.”

Another 102,000 pages of documents related to Kavanaugh’s record were not turned over for other reasons. The committee has had access to more than 415,000 pages on Kavanaugh’s background, the lawyer said in the letter.

Dick Durbin, the No. 2 Senate Democrat, said in an interview aired on “Fox News Sunday” that the White House’s citation of privilege on the documents was the first time that had occurred.

The Dinos are sure to support him!

Now that W’s speech at McCain’s funeral and the passing of candy during the service to Mrs. Obama seems to have rehabilitated W’s image in the media, I’m guessing you’re right. Heitkamp and Manchin will vote for Kavanaugh.