↓
Home→Activism→Librarians and Libraries at the Forefront of Democracy (Updated)

Do you know who this person is?

It’s Carla Hayden, the Librarian of Congress. She was nominated by President Obama last year and it took over 6 months to get confirmed because one of the committees stalled the process over her stance against the Patriot Act and use of filters in public libraries in the 2000’s. Yes, some pesky R’s, including now former Senator Mark Kirk of Illinois, voted against her appointment. The reason that Mark Kirk is being singled out is because the headquarters of the American Library Association (ALA) is located in Chicago.

Hayden’s appointment was historic for many reasons, but I will name 3:

Librarians of Congress are often academics, just as the previous one, James Billington, was a historian. So having a professionally trained library administrator is a good step in the right direction for leading the largest library in the country and the largest place of political records as well as publishing in the US. A little bit history about the LoC:

The Library of Congress was established by an act of Congress in 1800 when President John Adams signed a bill providing for the transfer of the seat of government from Philadelphia to the new capital city of Washington. The legislation described a reference library for Congress only, containing “such books as may be necessary for the use of Congress – and for putting up a suitable apartment for containing them therein…”

Established with $5,000 appropriated by the legislation, the original library was housed in the new Capitol until August 1814, when invading British troops set fire to the Capitol Building, burning and pillaging the contents of the small library.

Within a month, retired President Thomas Jefferson offered his personal library as a replacement. Jefferson had spent 50 years accumulating books, “putting by everything which related to America, and indeed whatever was rare and valuable in every science”; his library was considered to be one of the finest in the United States. In offering his collection to Congress, Jefferson anticipated controversy over the nature of his collection, which included books in foreign languages and volumes of philosophy, science, literature, and other topics not normally viewed as part of a legislative library. He wrote, “I do not know that it contains any branch of science which Congress would wish to exclude from their collection; there is, in fact, no subject to which a Member of Congress may not have occasion to refer.”

In January 1815, Congress accepted Jefferson’s offer, appropriating $23,950 for his 6,487 books, and the foundation was laid for a great national library. The Jeffersonian concept of universality, the belief that all subjects are important to the library of the American legislature, is the philosophy and rationale behind the comprehensive collecting policies of today’s Library of Congress.

Yesterday, Dr. Hayden posted some pictures on twitter, one of them being the Declaration of Independence to celebrate its author, Thomas Jefferson, whose birthday was yesterday, April 13th. Incidentally, Beverly Cleary, the author of the beloved Henry Huggins/Ramona and Beezus series, turned 101 on Wednesday (same day as Tulsi Gabbard’s), and she is from McMinnville, OR. (this is a shout out to PB4)

Happy Birthday to Thomas Jefferson! LC has a draft of the Declaration of Independence in his handwriting. So overwhelming to see. pic.twitter.com/BxGACdSMPP

Each April, around the second full week, is National Library Week.

A little history behind that, courtesy of ALA:

In the mid-1950s, research showed that Americans were spending less on books and more on radios, televisions and musical instruments. Concerned that Americans were reading less, the ALA and the American Book Publishers formed a nonprofit citizens organization called the National Book Committee in 1954. The committee’s goals were ambitious. They ranged from “encouraging people to read in their increasing leisure time” to “improving incomes and health” and “developing strong and happy family life.”

In 1957, the committee developed a plan for National Library Week based on the idea that once people were motivated to read, they would support and use libraries. With the cooperation of ALA and with help from the Advertising Council, the first National Library Week was observed in 1958 with the theme “Wake Up and Read!”

National Library Week was observed again in 1959, and the ALA Council voted to continue the annual celebration. When the National Book Committee disbanded in 1974, ALA assumed full sponsorship.

I know the public library was one of the best investments of my parents and now my tax dollars. My parents couldn’t afford vacations very often when I was child, so I traveled through books with The Boxcar Children, and to Tulsi’s homestate of Hawaii, where I found out they ate poi in addition to pineapples. But I also read quite a few biographies and to this day, it is my favorite genre for reading. My personal favorite biographies are of Eleanor Roosevelt and other First Ladies, such as Abigail Adams.

Trump has proposed elimination of all federal funding for libraries, and for grants issued through the Institute of Libraries and Museum Services. The grants are often research based or offer pilot programs that can be replicated without corporate or political bias, despite one of the grants named “The Laura Bush 21st Century Librarianship program”.

“ILMS Director Dr. Kathryn Matthew notes that $214 million of the $230 million budget goes directly to grants to state and local libraries, including $155 million distributed through a population-based formula grant.”

What a way of saying thanks! pic.twitter.com/qg0gw01PEn

You can ask Congress to continue supporting IMLS and other types of funding by going to this link: http://cqrcengage.com/ala/?0 Inside the webpage is a search box whereby you can type your zip code and it will help one find their Congress person.

I hope you will consider writing or contacting your Senator or Congress person and let them know how much libraries are vibrant and relevant for not only literacy, but democracy. I’m interested in hearing in your stories about libraries (hopefully good ones!). 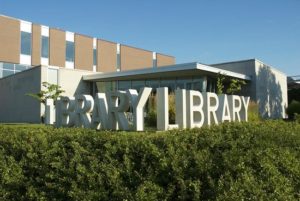 Ivanka tries to honor National Library week, but it is an epic fail:

This #NationalLibraryWeek, we honor our libraries and librarians for opening our eyes to the world of knowledge, learning and reading!

Your dad wants to cut all of our federal funding but thanks for the tweet. #SaveIMLS https://t.co/N6o9xIGuFg

Wait, is that before or after all federal funding for libraries was eliminated? #saveIMLS #NationalLibraryWeek https://t.co/jpNiHWTYke

I really enjoyed your diary, Benny. I didn’t know all of this interesting library history.

When I was a kid, we went to the public library almost every Saturday morning to return books and check out new ones. My entire family still loves to read.

I hope that the proposed reductions in funding don’t end up closing some public libraries. Many families today still do not have internet access, and certainly not multiple devices for reading books online.

Hey–it’s good to see ya, Nomandates! Thanks for dropping by.

The biggest threats really are the Koch Brothers and Club for Growth as they often shower money to convince folks not to vote for small increases in tax levies to support local libraries. In my community, that hasn’t happened yet, but there are opportunities where it could happen. We have a really nice library but in the last few cycles, the library was left out of proposals to raise a few cents more to keep the library nice and have extended hours. As a result, the library had to cut back on hours and they haven’t been able to hire any new strategic hires. However, we have a new library director, so we’ll see if she can get the board to agree to back some initiatives.

What continues to surprise me (and it shouldn’t by now) is just how petty they are in not wanting to fund relatively inexpensive stuff that benefits an entire community.

I’m glad that some folks called out Ivanka –these clueless, entitled jerks deserve to be shamed every time they pretend to care about the public good.

Fingers crossed for your local library.