↓
Home→Issues→Climate Change→Live on the coast? Wonder how rising sea levels will affect you? 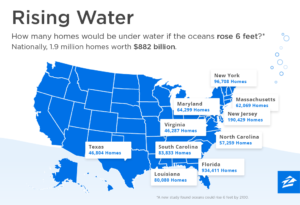 Thinking of buying an oceanside home? You might think again, according to Zillow, the realty website and blog. Conservatives legislators may still be denying reality, but realtors and insurance companies are paying attention. The Effect of Rising Sea Levels on Coastal Homes, by Melissa Allison on 2 Aug 2016, spells out exactly what it means — especially for folks in the east and southeast.

Here’s the link, but I’ll include a few bits of information here: http://www.zillow.com/blog/rising-sea-levels-coastal-homes-202268/?utm_source=email&utm_medium=email&utm_campaign=emm-0816_buzzrisingwaters-ctabutton

Despite record-warm years and some crops already reacting to unusual shifts in the weather, climate change for many people remains an issue for the future. That future came a little closer this year, when scientists studying Antarctic ice loss reported that if carbon emissions continue unabated, sea levels could rise six feet this century — significantly higher than previous predictions of a two-foot rise by the year 2100.
If the oceans rose six feet today, 1.87 million homes in the United States valued at $882 billion would be flooded by sea water, according to a Zillow Research analysis using data from the National Oceanic and Atmospheric Administration (NOAA).
Roughly half of them — 934,411 homes, worth $413 million — are in Florida.

The article discusses more specifics about Florida — interestingly, it doesn’t mention port and oceanside cities on the West Coast. I’m wondering about the impact on the San Francisco Bay… Seattle and Portland… Los Angeles and San Diego… Monterey Bay … even the Sacramento Delta as water levels rise in San Francisco Bay. But back to the story:

Migrations caused by rising sea levels would create a paradigm shift from a world with stable shores to one with moving shores, Strauss said. “And they’re going to keep moving for centuries.”
He also pointed out that ports all over the world are at sea level. “Europe has been rocked by a migration crisis the last couple of years, but that’s very small compared to what the world is likely to see if the sea-level rise continues to accelerate.”

Are you imagining what might happen as coastal residents need to move inland and whole cities begin to be eaten away? The article mentions how this is already happening in Louisiana, though no one is really dealing with it yet. Looks like Denial isn’t only a river in Egypt….

Then the article looks at the impact on the insurance business (yes, they’re paying attention).

Asked about the predictions of seas rising six feet, Dennis Burke, vice president of state relations at the Reinsurance Association of America said, “If that happens, there will be parts of the country that are uninhabitable. That should be a concern to all of us, particularly with the shifts in demographics where more people are moving toward the coast because it’s a nice place to live.”
The industry is in touch with NOAA, and understands that the science indicates there will be rising sea levels, said Burke, who also spoke at a “Climate Risk Summit” this summer in Washington State.

Do you have children and grandchildren? Hmmmm. You might want to buy a nice chunk of land somewhere inland while the getting is good, for their futures.

I’ll be touring the area with cousins from Sweden for the next few days, so I won’t be able to answer right away, but I will check in. Yes, these cousins — like most of my cousins there (it’s a lot of them!), live on the coast, just above sea level.

When I initially turned to painting landscapes (I painted people before that), it was part of an environmental action in protest of planned development with a group of fellow artists and friends. That effort was successful — and that beautiful coastal wetland is now considered a national treasure. It’s hard to think of just how it, too, will be affected by rising sea levels.

As a significant stop for birds on the Pacific Flyway, its presence — and safety — impacts birds and their migratory patterns. Perhaps that’s true for other stops along the Pacific Flyway — and other migratory routes, including the ones made by birds from their summer nesting grounds in coastal Sweden near where some of my cousins live.

Rising sea levels impact more places than just the ones that are obvious, and more living beings on the planet than the ones we might first think of….

On that note, while we have today, I wish you all a truly wonderful day!

Yeah, I believe the Pentagon has also singled it out as a threat, perhaps greater than terrorism. Especially the lack of water.

The pentagon isn’t going to be a savior though any more than cops will protect us as citizens:

“One of the most startling aspects of the initiative is its conflation of peaceful activism with terrorism. “[S]upporters of political violence” are “different from terrorists only in that they do not embark on ‘armed militancy’ themselves,” Ahmed explains. And although university researchers were told that the initiative was a “basic research effort” with no real application, Ahmed cites an email that clearly shows “that DoD is looking to ‘feed results’ into ‘applications.’ ””

Sorry I couldn’t get the links to work and subsequent edits didn’t work and now it won’t let me edit at all.
The links are both at truthdig. Under the article about why it is so hard for military folks to speak out are links to two more articles about how the pentagon is viewing protesters on climate change.

Huh. Doesn’t surprise me. Even though one of their own reports says water scarcity will cause yyuuuuge upheaval. Years ago.

You would think there would be SOMEbody looking at how fracking is devastating water quality in aquifers then, too, wouldn’t you? And how Nestle is buying up water rights, and in at least one case sucking up water out of the ground without a contract? (Including in my town.)

I couldn’t find the article you referenced, @Jo Crain , but I did find this at Truthdig.com:
Nine FOIA Requests Seek to Find the Extent of Government Spying on Climate Protesters
Posted on Aug 11, 2016
By Deirdre Fulton / Common Dreams

As someone who,lives in a ZONE ONE evacuation area on the NE coastline… DONT BUY SHOREFRONT PROPERTY.

On the day Sandy came ashore my apt building was suddenly surrounded by 5 feet of salt water… Which destroyed every single thing it touched. We are still rebuilding out here…. and it’s damn neigh on impossible to get affordable insurance… Even for cars… Over 10,000 cars drowned out here during sandy.

If you want to have a shorefront home.. Buy something inland and wait a few years.

I don’t think the sea will get to Arkansas anytime soon. Though I can always hope. 😉 I want to live near the sea. At my age, I seriously doubt it will rise significantly before I croak, LOL.

For instance… That great Old summer song UNDER THE BOARDWALK… There is no longer an under the boardwalk out here… Where there once were small beach businesses renting chairs and umbrellas and families setting up blankets to stay out of the sun and lovers ummmm…. Anyway, NOW there is a solid wall of sand ….right up to the boardwalk in an attempt to keep the ocean from Continuing to flood the area when it rains.

And what is NUTS is developers … Seeing $$$ continue to build ON the shoreline… It’s crazy.

Developers are continuing to build right on the shoreline? That IS crazy.

And on a happier note, Happy Birthday, Knotlookin! I hope it’s a wonderful and celebratory day!

Well, that’s one thing you won’t have to worry about, at least!

I’m so sorry you had to go through that, Knotlookin. The article doesn’t address how much more severe the storms are that people on the coasts (and inland) are having to endure. I’m glad you came through it, and I wish you and your community all the best as you continue to rebuild.

Here’s a link to a website with maps that allow you to put in any location and see how rising sea levels will affect that spot. Go to the risk zone map, and enter a location. They don’t have all locations in the world, but it does show a lot.

This website told me what I already know LOL my exact location will be under FIVE FEET of water as the tide rises… We sure hope that number holds because my coop just spent a gazillion dollars raising all our power distribution buildings UP five feet… They were all under water during sandy which cause a total electrical failure. I. Order to get flood insurance we had to raise the rooms above the sandy flood line.

Funny (not) how that works, isn’t it?