So Neera Tanden did a MLK tweet this morning. Rob’s response was quite typical.

He'd probably criticize Democrats for waging endless war on poor people abroad while spying on American citizens at home, then you'd denounce him as a Kremlin agent

MLK’s opinions about capitalism seem to be more and more known:

"Capitalism has outlived its usefulness. It has brought about a system that takes necessities from the masses to give luxuries to the classes." ~Martin Luther King Jr.

Benjamin Dixon did a fantastic thread of MLK quotes and began it with this – words that certainly still ring true today:

I would say that a lot of people may think they more about MLK than they do:

Did you know that Martin Luther King Jr. was a Socialist? pic.twitter.com/EA8vuUZTCf

On Martin Luther King Jr. Day, the establishment (and their media) like to celebrate MLK’s love of imperial America and centrist economic doctrine. The symbol celebrated bares little resemblance to the actual man and his ideas.

There is a reason the FBI orchestrated a well-resourced campaign to destroy King that ultimately culminated in J. Edgar Hoover having a letter sent to King to push King to commit suicide.

In the last campaign before his assassination, King campaigned for a democratic socialist agenda. Called the Poor People’s Campaign, demands included a guaranteed job, retribution of land and capital, and more inclusion of the poor in state decision-making.

Was MLK one of the first proponents of Universal Basic Income?

And what do you suppose MLK had in common with Einstein (other than both being highly intelligent)? 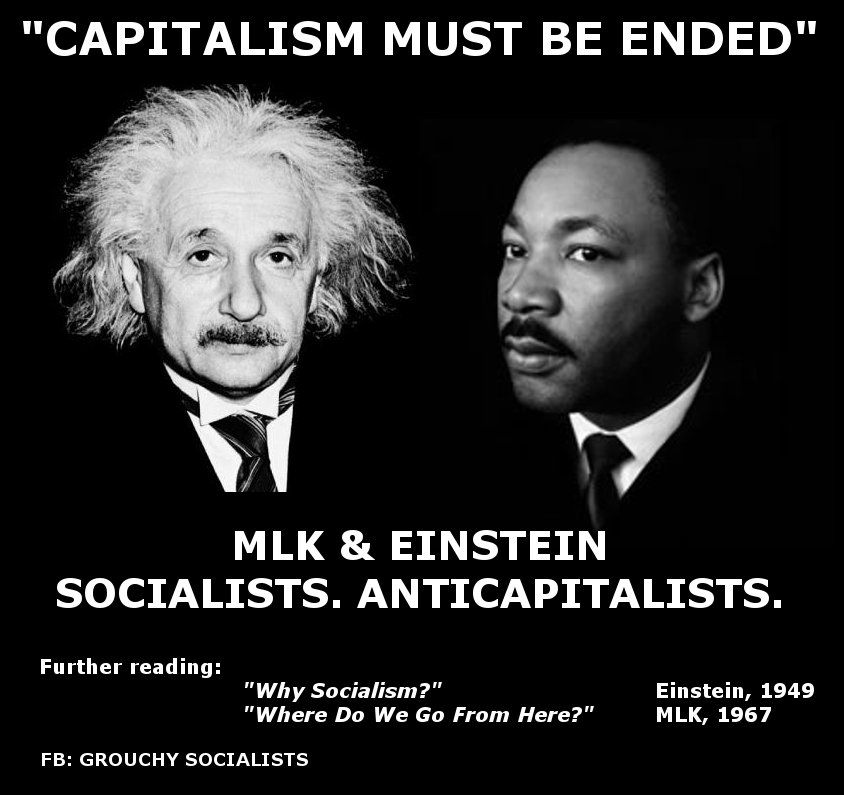 A tidbit from Albert Einstein while we’re here – I’d bet that MLK would concur:

Private capital tends to become concentrated in few hands… The result of these developments is an oligarchy of private capital the enormous power of which cannot be effectively checked even by a democratically organized political society. This is true since the members of legislative bodies are selected by political parties, largely financed or otherwise influenced by private capitalists who, for all practical purposes, separate the electorate from the legislature. The consequence is that the representatives of the people do not in fact sufficiently protect the interests of the underprivileged sections of the population. Moreover, under existing conditions, private capitalists inevitably control, directly or indirectly, the main sources of information (press, radio, education). It is thus extremely difficult, and indeed in most cases quite impossible, for the individual citizen to come to objective conclusions and to make intelligent use of his political rights.

Did you know that the stock market is closed today? Ironic.

Americans are more likely to get a day off to honor the legacy of Reverend Martin Luther King, Jr., than they are for holidays remembering Christopher Columbus or George Washington.

And what does the mega-capitalist, sometimes-resident of the White House, President think about MLK Day?

“I encourage all Americans to observe this day with appropriate civic, community, and service activities in honor of Dr. King’s life and legacy,” Trump said in a tweet Friday after a ceremony at the White House.

Does spreading the truth about Martin Luther King Jr. count?

“It is still treated as a second-tier holiday,” said Harley Shaiken, a labor historian at the University of California at Berkeley. “In light of what Trump said [Thursday], we really should elevate it in a way that it really becomes central. This is a key time in history to be celebrating his values.”

Please feel free to add other tidbits about Martin Luther King Jr. below.

Martin Luther King Jr. Spent the Last Year of His Life Detested by the Liberal Establishment

For years, King had been troubled by the war in Vietnam and raised it privately in conversations with the Democratic President Lyndon Johnson. As the conflict dragged on, King felt he had no choice but to publicly denounce the war.

“This business of burning human beings with napalm, of filling our nation’s homes with orphans and widows, of injecting poisonous drugs of hate into the veins of peoples normally humane, of sending men home from dark and bloody battlefields physically handicapped and psychologically deranged, cannot be reconciled with wisdom, justice, and love,” he warned. “A nation that continues year after year to spend more money on military defense than on programs of social uplift is approaching spiritual death.”

The African-American establishment, fearful of Johnson’s reaction, also distanced itself from King.

As he alienated the liberal establishment for his campaign against the Vietnam War, King also planned to mobilize mass demonstrations and civil disobedience aimed not at his old foes in the segregationist South, but politicians north of the Mason Dixon line who he believed were failing to act to stop endemic poverty.

Also that year, he launched the Poor People’s Campaign, aimed at providing good jobs, housing, and a decent standard of living to all Americans. More than 40 years before American protesters took to the streets of New York City and other locales to “occupy” space to protest inequality, King proposed a massive tent encampment in Washington, D.C. to demand action on poverty. King was assassinated during a campaign to organize sanitation workers in Tennessee in April of that year, before he was able to set up the encampment.

How well would MLK have fit into today’s Democratic establishment? Would Neera Tanden be retweeting HIS tweets? I don’t think so.

King’s own views of capitalism are often sanitized in textbooks and mainstream media stories, but he could not have been for explicit:

“You can’t talk about solving the economic problem of the Negro without talking about billions of dollars. You can’t talk about ending the slums without first saying profit must be taken out of slums. You’re really tampering and getting on dangerous ground because you are messing with folk then,” King declared. “You are messing with captains of industry. Now this means that we are treading in difficult water, because it really means that we are saying that something is wrong with capitalism. There must be a better distribution of wealth, and maybe America must move toward a democratic socialism.”

King’s anti-capitalist views cannot really be bifurcated from his struggle for racial justice as they come from the same spiritual conception of the world. For King, capitalism was part of materialism. which was part of a deadly triplet.

“When machines and computers, profit motives and property rights are considered more important than people, the giant triplets of racism, materialism and militarism are incapable of being conquered,” King asserted.

What would MLK have thought about Paul Ryan?

Today we remember a great man and his work. We read his sermons. We recall his sacrifices. We give back. In doing these things, we raise our gaze and renew the spirit in which we serve one another. Such is the calling of #MLKDay. pic.twitter.com/UpNNtZJ8n5

Ryan is not fit to utter MLK’s name.

There is no apt description for how low and despicable yahoos like Paul Ryan are. MLK would have avoided them. T and R, mags!!

He certainly would have approved of Jayapal

Throughout my life, Dr. Martin Luther King, Jr. has been a deep inspiration. The trail he blazed — and his courage — made it possible for me, as a 16-year-old immigrant, to come to America and pursue my version of the American dream, and now to serve as the first Indian American woman elected to the U.S. House of Representatives.

Dr. King put his life on the line for justice. If he were still with us during these trying times, he would be marching alongside us — pushing to raise the minimum wage and eradicate poverty, ensure healthcare for all, resist militarism, and combat racism.

Today, Dr. King’s fight is still our fight. And that’s why I’m sharing this news with you today: I will not be attending the State of the Union on January 30.