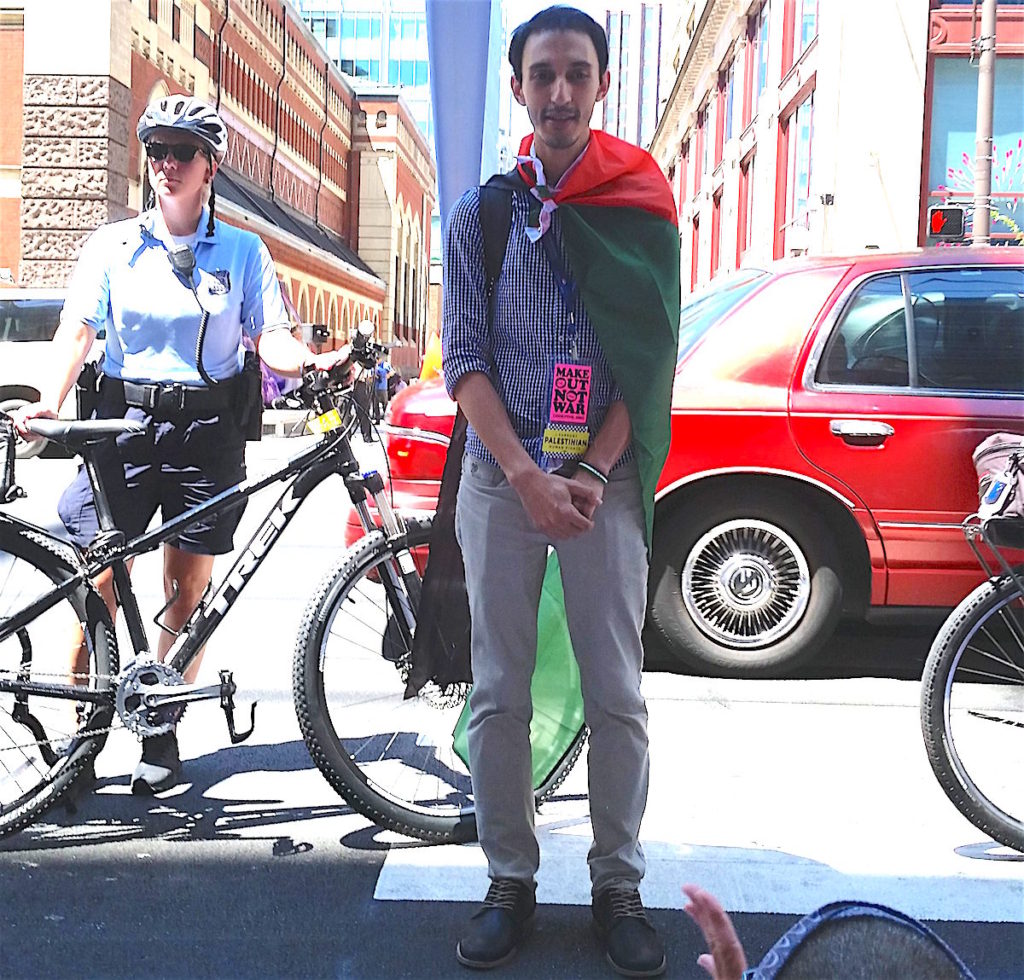 For  those who care about Palestine, the most exciting moment of the Democratic convention took place Monday when a young delegate jumped on to his chair on the convention floor and unfurled the Palestinian flag. He was soon surrounded by a crowd holding up Hillary Clinton signs to make his demonstration disappear. But the incident quickly went out on social media — “a very human moment in a very dark time,” as Laila Abdelaziz put  it.

The man who raised the flag says that he was abused and knocked around by older delegates, but many young Democrats cheered him on.

“This issue is being brought to the forefront of the Democratic Party,” Ali Kurnaz, a Sanders delegate, said yesterday. “I believe that now, largely thanks to Bernie Sanders including it in his campaign platform people are starting to understand the issue for the first time. While others are coming out of the woodwork in support.”

Kurnaz is all Democrat: the Floridian is vice president of Young Democrats of Orange County, and communications director for Florida Young Democrats.

But for years, Kurnaz says he kept quiet about his support for Palestine. Born and raised in Orlando, of Turkish-American descent, Furnaz began doing Democratic Party work in 2007 when he was 17, and though Palestinian human rights were important to him, he says, “I learned very quickly it was an issue I had to suppress. Even as a college Democratic Party organizer, I would make sure that the subject was not brought up, because then there’d be a vote and the Zionists would win.

“But now it’s changing. I can tell most of the people of my age agree with me.”

Read the rest of the story here.

Brave kid! My hat is off to him. The Palestinians have been getting a rough deal for decades.

“surrounded by a crowd holding up Hillary Clinton signs”

Ah, the irony of a cover up….using Hillary Clinton signs….

Encouraging to hear his optimism! Good for him for being so brave and caring.

So weird to me how Palestinian support is viewed as something to keep under wraps, or behind American flags, as the case may be:

Bernie delegates all chanting "No More War," rest of delegates drown us out with "USA." Hillary staff immediately surround us with 🇺🇸 flags.

I do agree with him that the wind seems to be slowly shifting. But there’s a long way to go.

And this struggle just got more difficult:

The convention managed to keep controversies over Israel under wraps and away from public eye. Moving forward, the Clinton campaign will continue stressing the language of the platform, not the internal battle that preceded it.

Laura Rosenberger, the Clinton campaign’s foreign policy adviser in charge of Middle East affairs, said that if elected, Clinton will fulfill her promise of inviting Netanyahu to the White House in her first month in office.

Thanks for bringing Ali Akın Kurnaz to my attention.

Clinton’s reflexive pro-Israel sentiment is like something from 20 years ago. No nuance, just the type of display of loyalty that Democrats all had to do in the 20th century. She doesn’t have to do that anymore. She could take an Obama/Kerry, more thoughtful tack. But she just doesn’t want to.

This is just who she is, and it’s a heck of a thing to be stubborn about.

Neoliberals realize that they blend seamlessly with neocons at this point. They have an easy majority and machines to take care of the rest, so they have been acting more and more brazenly.

I’m not entirely clear why you’re writing about this as if Clinton’s sentiments express something novel, something brought about “at this point,” something becoming “more and more” anything. The view of American-Israeli relations laid out last night isn’t something new, either from her, or from the mainstream of the Democratic Party. It’s the standard line from about 1948 through the present, and the one she advocated for throughout the primary, and before it.

What’s novel is that there is now room for someone in her position to back off a little. The external political forces are making it more possible to be more even-handed and progressive on Israel-Palestine issues, and the Israel lobby is less strong that it has been since Truman. Remember when they tried to spike Chuck Hegal’s appointment as Secretary of Defense and failed? Or when they, and Netanyahu himself, tried to get Congress to block the Iran nuke deal, and failed?

I lean towards viewing political developments as consequences of objective forces, but I don’t think you can attribute Clinton’s Israel hawkishness to any larger political trends. I think this is Hillary herself, individually.

I was pointing out that she doesn’t feel the need to appease the pro-Palestinian part of her Party b/c her opponent is so unpopular.

Perhaps you’re right and she would have taken just as hard a tack against, say, a Jeb Bush or Kasich.

You might be right and, if so, that intransigence suggests a person whose viewpoint is rigid, which I don’t find encouraging, and/or a lack of self-reflection, and/or an over-reliance on financial support (and others forms of support) from the Israeli hardliner groups, all discouraging.

Obviously, there is nothing wrong with being a supporter of Israel. But it doesn’t have to be a this or that thing. One can support Israelis AND Palestinians and do one’s best to chart a fair course through the issues that divide them. But Hillary seems to be firmly on the riverbank of Israel with no intention of doing more than glancing over to the other side.

But more specifically in reply to your comment, Joe, Democratic party PTB seem to be concerned about losing some Jewish support to Trump and may not agree with you on HC not needing “to do that anymore”.

Jews for Progress has raised over $1 million over the last two months, one of its founders, Ron Klein, a former Florida congressman who consults with Democrats, confirmed to JTA on Monday.

Also backing the Super PAC – a term that describes a political action committee that may raise unlimited funds – are Marc Stanley, a past chairman of the National Jewish Democratic Council; Michael Adler, a Miami lawyer who is a major fundraiser for Democratic candidates, and two longtime donors to Democratic and pro-Israel causes, Fran Katz Watson and Steve Paikowsky.

Republican attempts to find Jewish votes every four years are always dry wells. It seems especially unlikely they’d pick this year, with Trump attracting open antisemites to his cause, to be the year they started swinging to the Republicans.

Thanks for posting these, mags!

My first exposure to the horrors inflicted on Palestinians by Israel and its surrogates — particularly the U.S. — was in my conversations with a Palestinian refugee when we were both in engineering graduate school in the U.S. in the early 1980s. Before our always quite friendly conversations, I had no idea anything he educated me about even existed. My own subsequent readings not only confirmed everything he told me, but amplified on it. I’ve vocally supported Palestinian rights ever since. (The only political disagreement he and I ever had was about Nixon. He thought Nixon was great because of his internationalism, while I saw only Kissinger, the needlessly prolonged Viet Nam War, and Watergate.)

What a good and brave young man!

For more on the situation in Palestine and Israel, see the excellent Walled, by Sylvain Cypel (New York : Other Press, 2006) — a detailed and balanced view on the ground from a veteran Le Monde correspondent.