Good news…hundreds and hundreds of Minnesotans protested, wrote emails, made angry phone calls and sent letters to their local and State Reps for over a week demanding that Minnesota’s Hennepin County Sheriff’s Deputys be brought back from The Standing Rock Stop the DAPL Action.

Hennepin County covers the City of Minneapolis and surrounding areas, the most populace area in the state.

Now, the sheriff’s deputies and equipment are on their way back to Minnesota from the site of the Dakota Access Pipeline protest in North Dakota.

The protest against the Dakota Access pipeline moved inside Minneapolis’ City Hall on Friday. 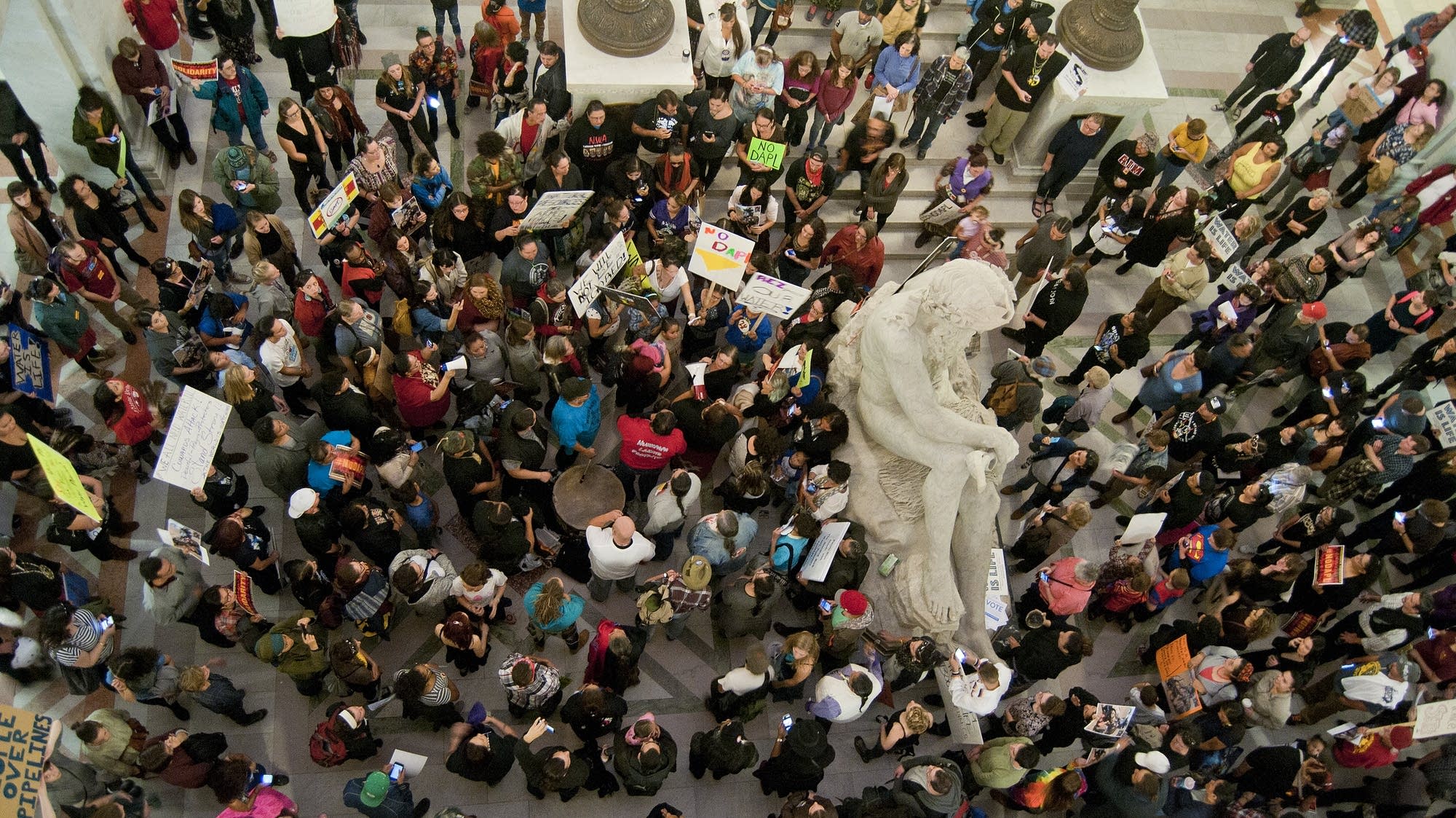 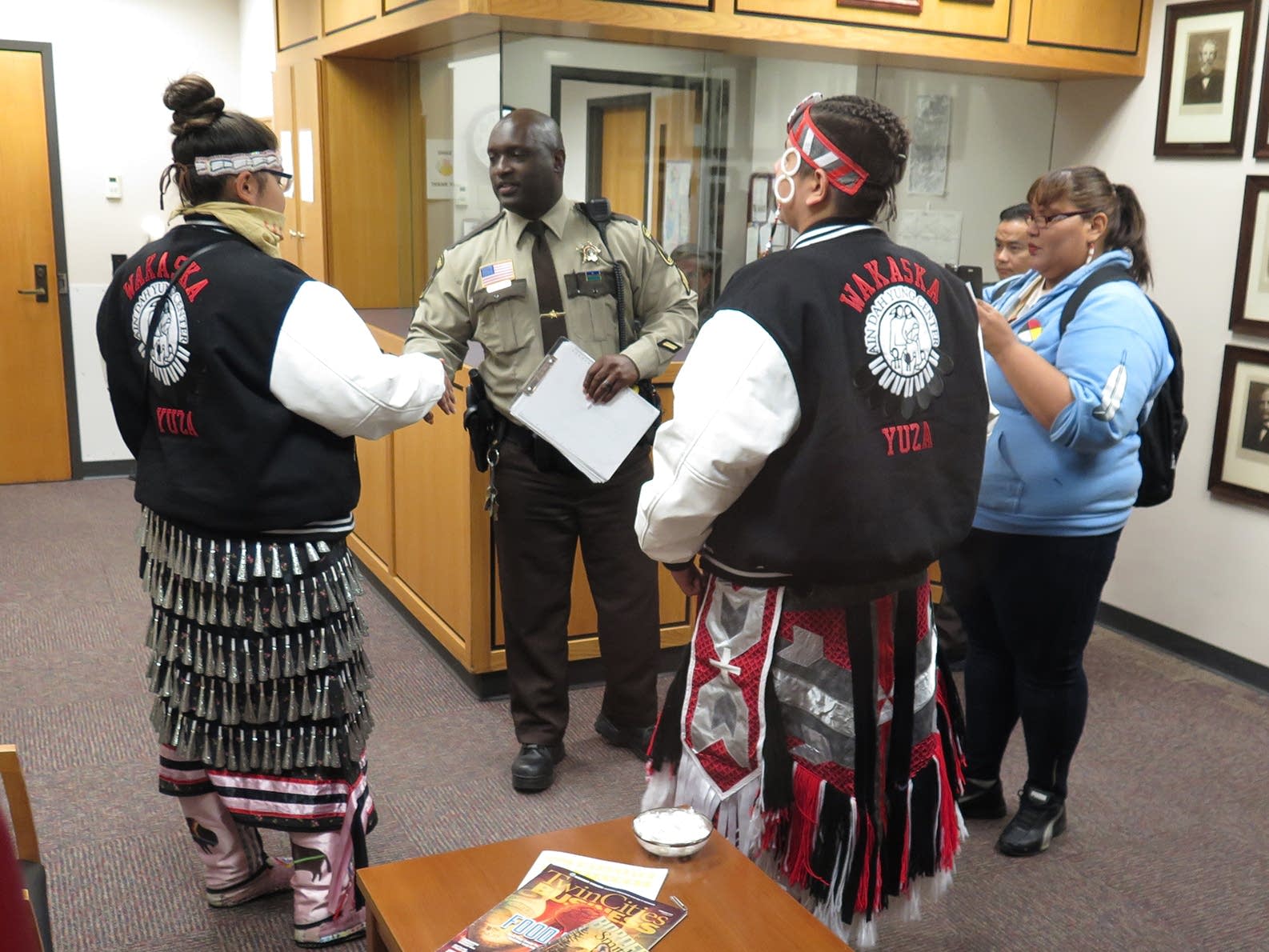 The Sheriff’s Office initially locked its office doors as the protesters approached, but a waiting deputy later allowed a trio of demonstrators to enter and present a petition meant for Sheriff Rich Stanek.

“Reimbursement for expenses related to providing this service will be made by the State of North Dakota,” said a statement from the Hennepin County Sheriff’s Office. “The EMAC system was ratified by Congress and has been adopted as law in all 50 states — to ensure no sheriff, no deputy, and no state stands alone in the state of an emergency.”

But opponents wanted Minnesota officials to rebuff the request nonetheless, saying they should defer to pipeline protesters.

“This protest is supposed to be a peaceful, prayerful one, so I wonder why this county is sending their sheriff’s deputies there,” said the Rev. Robert Two Bulls, representing a group of clergy who helped organize the Minneapolis gathering.

Others said that the petroleum pipeline threatened drinking water along its route and disturbed land sacred to Native Americans in the area, like the Standing Rock Sioux.

State Rep. Peggy Flanagan, DFL-St. Louis Park, and a member of the White Earth band of Ojibwe, urged county officials to stay away from the pipeline protest: “This request came in. And it’s simple. No.”

A group of state legislators who met with Stanek say they think the emergency assistance protocols only apply to natural disasters or an attack on the scale of 9/11.

“We have an assignment that we’re going to go back and try and change a couple parts of the law that will make it clearer the distinction between different types of emergencies,” said Rep. Karen Clark, DFL-Minneapolis, who met with Stanek, “so we don’t get ourselves in this sort of a position again.”

Karen Clark, is a long time grassroots progressive and State Rep, champion of LGBT issues and a Bernie Supporter.

A sheriff’s office spokesperson says Stanek has declined to comment on the meeting at this time.

Rep Flanagan, who is also a citizen of the White Earth nation, says the participation of deputies from Minnesota in law enforcement activities at Standing Rock have set back efforts to improve community relationships, especially with Native Americans.

“Our big ask was, ‘What is the sheriff’s plan for rebuilding that trust with the community?'” said Flanagan. “Because it has been incredibly damaged and there will have to be much intent and strategy going forward to rebuild it.”

Stanek’s decision also drew criticism from Lt. Gov. Tina Smith, who posted her disagreement with the sheriff on Facebook.

“I do not have any control over the Sheriff’s actions, which I think were wrong, and I believe he should bring his deputies home, if he hasn’t already.

I strongly support the rights of all people to peacefully protest, including, tonight, the Standing Rock protest.”

State Rep. Susan Allen, DFL-Minneapolis, said Hennepin County Sheriff Rich Stanek confirmed at a Monday afternoon meeting that 30 of his deputies were en route to Minnesota after fulfilling their part of the Emergency Management Assistance Compact, a national system for sharing personnel during a state of emergency.

Allen said she is unsure whether sheriff’s deputies from Anoka and Washington counties also were headed home.

I hope Anoka and Washington counties will leave as well, along with the other remaining 4 states that sent personnel there.  Let Morton County stand alone in its’ racist, over the top militarized aggression in service to its Corporate Big Oil  masters.

The world, the UN and Amnesty International are watching.

Now, this is different from the city police, who had an incident in the summer, right?

Yes, different action but part of the same sentiment. As far as I know, no Mpls Police have been sent to Standing Rock ND.

The Minneapolis City Council and Mayor, as well as the St Paul City Council have passed resolutions that support the NODAPL and the Standing Rock Sioux Nation and their allies.

there is this from early in September where activists protested at a Mpls law firm that represents Dakota Access, LLC, a subsidiary of Energy Transfer Partners

There have also been protests at Wells Fargo and other banks funding DAPL. These are all policed by the city police force.

more info..many Minnesotans have traveled to Standing Rock Camp. Here’s a story about some of our Tribes actions..the Lakota, Pawnee, Crow, and Minnesota’s Anishinabe from Red Lake, Leech Lake, Mille Lacs, and Fond du Lac plus many more.

Any advice from all of this for people in other areas who want to find out if their police have been sent to Standing Rock, and if so how to get them recalled back home?

I would call your city Mayor’s office or a member of your city/town council and ask them, if they don’t know ask them to please find out and get back to you with the answer. Join with other activists in your state..hook up and find them on the internet for ideas how to proceed in a peaceful, non-violent way.

The Water Protectors have asked that all of their supporters only use peaceful, prayerful, non-violent actions in support of their cause.

Contact your State Representatives asking if any of your state’s County Sheriffs deputys have been sent there. Let your local, county, State Reps know your opinion in this matter. They are there to represent their constituents.