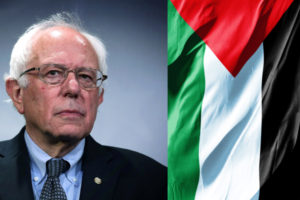 I have been criticized for my support of a Liberal Zionist Jew who has not come out in favor of dismantling Israel. But my support is for a strong human rights activist who has championed the little man for his entire career. My support is for a union supporter who stood up with all those who have gotten a burn notice and been forced to run. Now it’s my turn. This is my Bern notice.

Sixty seven years ago, the fledgling Israeli army massacred my infant father’s village, leaving my grandparents little choice but to flee. The entire village, but a few elderly and infirm members of the community who could not be moved, fled to the neighboring village, for what they believed to be but a short period of time. Within a few days, the soldiers moved on, and people returned to find the village gutted, destroyed, and those elderly infirm members burned in a barn. No one had expected they would be murdered, let alone hung and set on fire. No one predicted that they would be exiled. But it was clear. They had to leave.

Skip forward sixty-six years to more recent history. A young boy is kidnapped, tortured, and lynched as a pricetag.His brief sixteen years were a commodity. The conflict was written on his body. Last year, sixty-six years later, the Dawabshe family were set afire in their homes by Israeli settlers. Gruesome stories and pictures viscerally demonstrated the depths of depravity of the current status quo. Recently, a man in Gaza self-immolated in protest of the ongoing siege. He burned down his own body, refusing to allow a US-made and financed Israeli missile to do it first.

Palestinians have become accustomed to their lives and livelihoods flickering in a blaze. Occupation, degradation, demolition, dispossession, expulsion. We have experienced a whole litany of abuses, a dirge often too long to sing. To paraphrase Darwish, from them steel and fire, from us our flesh.

As my father’s generation made its way into the Western world, they carried with them a deep-seated mistrust of government. They remained skeptical of democracy. Why wouldn’t they? The place they sought refuge was also the biggest supplier of arms to their invader. American Palestinians have walked a tightrope of love for this country and hate for its foreign policy. As much as they tried to assimilate, they also encouraged their children to remain aloof and disengaged. Aware, but not invested in the process. There was always a fear of reprisal. What would happen if we became involved and the tide changed? A refugee’s greatest fear, besides the road, is the camp.

A general malaise and pessimism of a fair shake in the system pervades, leading to a lack of engagement. Ultimately, it is believed that all candidates will capitulate to the status quo, all will support the “United States’ only ally in the Middle East”, all will defend Israel. Some candidates have attempted to take a stronger position against Israel–Adlai Stevenson, Dennis Kucinich, and even Ron Paul–but none of them have been elected.

When my uncles, who were twelve and fourteen at the time, were chased out of Palestine, they found work in a cement factory in Jordan. They were child laborers, working twelve hours a day, six days a week, for a pittance, and they eventually grew into adult labor leaders. My uncle fled Jordan because he received a burn notice: Leave or go to jail. When he came to America in the early sixties, he found work in a Coca-Cola factory, and he faced the same union busting thugs he had fled eight thousand miles to escape.

My father was a child laborer, picking fruit as a migrant farmer to help his family survive a pitiful existence in a refugee camp. Despite his father’s passing, his mother, brothers, and sister helped pave his way to becoming a professor and full member of a teacher’s union. He teaches in an economically deprived area, trying to bridge the educational gap many low-income students suffer through.

Two of his daughters went on to become nurses and member of the National Nurses United. They see first hand how inadequate health care and services devastate families, physically and financially. They try to ease the pain in a crippled system.

We are a Palestinian American union family. We have experienced our fair share of deprivation. We have seen the effects a lack of proper education can have on a population. We have witnessed the inhumanity of inadequate health service and care. We believe that the time is now to pull together, not only as a family, but as a collective community. Our support of Bernie Sanders is an ardent attempt at changing the grim reality for those on the bottom.

Perhaps Bernie Sanders will not be the president who directly confronts Israelis on their terrible human rights abuses, though in my heart of hearts, I do so ardently hope he does. However, he may be the president who moves to defund their nearly five billion dollar aid package in order to bring about real change in our crumbling system. Though Sanders has suggested defunding Israel (and Egypt), no other candidate in the running has ever questioned a continued endowment to Israel for any reason. This sets him far apart from all other candidates, past and present.

Moreover, Bernie Sanders will be the president who directly confronts corporations, monopolies, and lobbies.  He will champion the American Refugees, those of us with piecemeal work, transient home lives, no health care, reliant upon yet disenfranchised by a shoddy educational system. He will fight for those scraping by, trying to put ends together to meet.

I have been criticized for my support of a Liberal Zionist Jew who has not come out in favor of dismantling Israel. But my support is for a strong human rights activist who has championed the little man for his entire career. My support is for a union supporter who stood up with all those who have gotten a burn notice and been forced to run. Now it’s my turn. This is my Bern notice.

Thank you for sharing your story. My heart goes out to your family and all those who have suffered and died over the course of those sixty-six years. I continue to hope that humanity is becoming better than that.

Thank you, again. My best to you and your family.