On December 26th, 2017, protesters in Henoko, Okinawa, Japan reached their 5000th day of protest against the ongoing presence of the U.S military. With over 500 protesters, the people of Okinawa continued their fight against U.S. military occupation.

I didn’t know that Okinawa used to be independent of Japan.

Transferred from one imperial power to another, Okinawa represents a forgotten space of colonial conquest. Once the independent Ryukyu Kingdom, it was annexed by Japan in 1879. A brutal program of cultural and linguistic assimilation followed, the reverberations of which continue today. In 1945, Okinawa was the site of the last battle of the Pacific War, part of Japan’s strategy of sacrificing the islands to protect the mainland. Since Japan’s surrender at the end of WWII on August 14th, 1945, the U.S. military has continued to occupy Okinawa.

The protesters are fighting another American base that is being constructed, in Henoko.

From a purely practical standpoint, their fight is a lost cause. In 5000 days of protest, barring the occasional sensational incident, the activists have been ignored by national and international media.

Construction trucks continue to roll into the gates of the military base, and the police continue to drag protesters away. The historical trend of marginalizing the Okinawan people, socially and economically, continues to endure.

The same day at a meeting of the Environmental Oversight Committee, the ODB made an announcement in regard to a colony of scarce Stylaraea punctata coral found outside the ocean area planned for land reclamation work.

Rather than getting approval from the governor of Okinawa to transplant the coral, the ODB changed its plan to simply moving forward with construction.

It sounds as though the U.S. military has a free hand to do what it pleases there.

Around 3:30 p.m. on April 16 in Matsuda, Ginoza Village, 10 or more U.S. military amphibious vehicles crossed National Route 329 while traveling from the ocean toward the mountains. Regular traffic was stopped for over 10 minutes as the amphibious vehicles passed.

And the U.S. military keeps expanding their air space.

But, for me, this story is about perseverance, tenacity, and humanity.

The resistance in Okinawa can teach us about selflessness. The protesters remain conscious of what future generations will have to combat if nothing changes. Their motivation stems from a desire not to repeat history, and for younger generations not to experience the pain and violence they once did. Urashima-san, an author and activist, expressed that she does not “…despise individual military men. The marines stationed here are usually the youngest soldiers from the U.S. They are people who are underprivileged; many of them join the military to get benefits and an education. They are people, too, they are also victims of American militarization.” Echoing popular sentiment among the protesters, she recognized the humanity of the occupying force, themselves people, caught up in the agenda of a powerful institution.

Although these issues are seemingly distant, the activists consistently recognized that U.S. militarism, the exploitation of marginalized populations, and the violence it all engenders, against people and the environment, are global issues and are not, in fact, unfolding in isolation.

And the protesters don’t sound as though they plan to give up any time soon.

These 5,121 days of protest have drawn protesters from across the country and delayed construction of the new base in Henoko. Although seemingly small successes, the people continue in hopes that something someday will change. And while civil disobedience and community organizing are highly effective methods of resistance, perhaps the most powerful tactic is an unyielding sense of hope, a deep-rooted faith in the ability of a unified and persistent people to confront even the most daunting of forces. 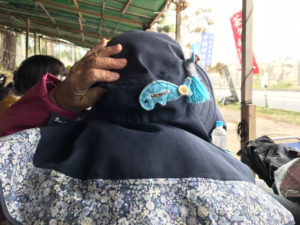 Protesters mark 1 year since U.S. base construction began in Okinawa

Around 600 protesters staged a rally at the relocation site of a U.S. air base in Okinawa on Wednesday, one year after construction work started there.

The protesters staged a sit-in in front of a gate of the neighboring U.S. Marine Corps’ Camp Schwab and paddled their canoes on waters surrounding the construction site in Nago, northeastern Okinawa, with some of them raising placards saying, “U.S. Corps, get out of Okinawa.”

Local police forcefully shoved aside some 400 protesters who gathered at the gate to block vehicles entering the base for construction work.

These Two Islands, 1,400 Miles Apart, Are Banding Together Against U.S. Bases

Guam and Okinawa have a shared history of exploitation by their governments — and a shared threat from new military installations.

In January, three residents from the U.S. territory of Guam visited Japan to express their solidarity with Okinawans struggling to block construction of new U.S. military facilities on their island.

The Japanese prefecture of Okinawa is host to 31 U.S. bases, which take up 15 percent of the main island. On the U.S. territory of Guam, the Department of Defense owns 29 percent of the island — more than the local government, which owns only 19 percent. And if the U.S. military gets its way, its share there will soon grow.

In 2016, explained the residents, Tokyo mobilized approximately 800 riot police to force through the construction of new U.S. helipads in the area.

“The entire island is a military training ground,” explained Isa. “No matter how much we ask the Japanese government to change things, nothing changes. U.S. military helicopters and Ospreys fly low at day and night. Residents are moving away.”

The Guam residents also visited Henoko, where the Japanese government has begun preliminary work on a massive new U.S. military installation to replace the U.S. air base Futenma, in Ginowan. The base will be built by landfilling Oura Bay, an area of immense biodiversity.

Local residents have been demonstrating against the plan for almost 14 years. The three Guam residents joined Okinawans during their daily sit-in outside the site of the new base.

“I respect the elderly Okinawan demonstrators who go to Henoko to sit-in. They’re physically removed by the riot police up to three times a day,” explained Yoshida. “In some ways, I felt sorry for the police ordered to remove these brave elderly Okinawans who are old enough to be their grandparents.”

Funny, you don’t read much about this in our media.

Our MSM would prefer patting themselves on the back and pointing the finger at Russia all day.

Military contamination on Guam looks set to worsen with the arrival of thousands of more marines. There are plans to construct a new live-fire range near a wildlife refuge at Ritidian. If realized, the area will be polluted by an estimated 7 million rounds of ammunition a year — and all its concomitant lead and chemical propellants.

T and R, mags!! 🙂 It is my sincere hope that people realize that there are a LOT of Americans who DESPISE the FRightwingnut 2-legged prehistoric corporate monsters known as MICC, etc. We’re educated, informed activists, and we vote.
—————————————-
***SCAM ALERT***
I got a personal message from a scammer calling itself “Mrs. Maureen.” Claims to be a widow from Australia with coin and no heirs. Wants $$ and my help to donate its $$ to charity. Classic example of an internet con artist. If any of you get a message from this yahoo, take cyber precautions.

It was encouraging to hear that the elderly Japanese protesters seen to understand that many of the young soldiers “join the military to get benefits and an education”.

When you say you got a “personal message”, was that via email?

Yes it was a email.

Oh, I see it too now, from a ‘Moureen Max’. No moulah for Moureen.

Delete it ASAP! I’ve already deleted the email. Make sure LD knows. Thanks!! 🙂

So did I, forward it to LD just to give him the heads up