↓
Home→Candidates 2018→Beto O'Rourke→Power The Future, a group whose Director has ties to the Kochs, tries to use Beto O’Rourke to its evil ends 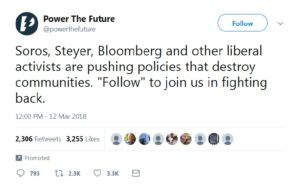 Now, I don’t tend to squander any love on Bloomberg, Steyer, or Soros, but I was curious enough to look up this group, Power The Future, and look at what I found on the group’s timeline: 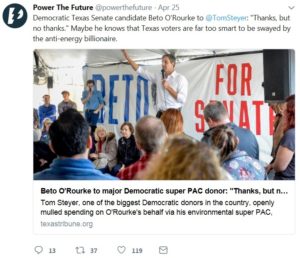 Hmmm, I thought, something seems off. Here is the linked story:

Beto O’Rourke to major Democratic super PAC donor: “Thanks, but no thanks”

Tom Steyer, one of the biggest Democratic donors in the country, openly mulled spending on O’Rourke’s behalf via his environmental super PAC, NextGen America.

Wait, is it..possible that O’Rourke said, “Thanks, but no thanks” for a reason completely different than the fact the Steyer is supposedly “anti-energy”?

“We are intrigued by Texas, and we are aware what we have to do in order to have an impact on a state that big. We need a lot of resources, but we have not made a decision to be involved with it,” Steyer said.

O’Rourke has long said he would not accept corporate PAC or super PAC money for his campaign, but he has no control over whether Steyer or anyone else runs ads on his behalf through an outside group.

“He can still do it,” O’Rourke said. “Literally, not only do I not have any control but I’m prohibited by law from coordinating. Having said that, for he and anyone considering doing this, we don’t want that. It’s not the way to run this, and I’m convinced it’s not the way to win.”

The El Paso Democrat was emphatic outside of the U.S. House chamber when asked about Steyer’s comments.

O’Rourke added: “This is going to be a real test for Texas and for the country and our democracy to see if people are a match for the PACs and the super PACs and the special interests and the corporations, and I’m all in on the people.”

So what is this group Power The Future?

We are a 501C4 with the mission of offering truth, facts, and research that will enrich the national conversation on energy.

Well, for starters, here the Linkedin page for the group’s Director, Daniel Turner: 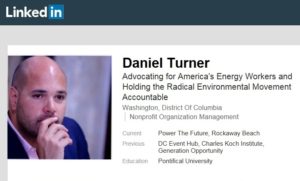 (H/T to the DK Climate Denier Roundup Community for that LinkedIn link. Yep, in the course of my research I found that they had done a piece on this group twelve days ago.)

Wait, what’s that? Daniel Turner used to work at the Charles Koch Institute?

And what is Generation Opportunity?

Generation Opportunity is a center-right political advocacy organization in the United States focused on economic policy and aimed at young adults. It is a sister organization to the Americans for Prosperity-led political network initially funded by the Koch family.[1]

And then, there’s this part:

In 2013, Politico reported that Generation Opportunity had received a $5 million grant from Freedom Partners, a group of about 200 donors that is associated with Charles and David Koch.

Back to the group’s tax status. From the DK piece:

Despite declaring that it does not lobby, Power the Future’s About page says that its non-profit designation is a 501c4. This tax designation means a lot. There are two main types of nonprofit organizations, 501c3 and 501c4. Organizations with c3 status are charities and are allowed to do minimal lobbying (typically less than 10 percent of its budget.) C4s, on the other hand, can do unlimited lobbying on issues and legislation relevant to their social welfare missions.

Despite claiming not to be a lobby shop, Turner created a front designed to do unlimited lobbying.

No, we’re not a lobbying shop. We aren’t advocating for specific legislation or promoting energy policy. But we do want to talk to everyone and anyone about these issues, and make sure the whole truth of every energy conversation is shared in the halls of Congress, in the White House, and above all, in the media.

Good work DK ClimateDenierRoundup Community! Gotta give credit where credit is due.

This group, Power The Future, is just another Koch operation and them using Beto O’Rourke’s desire to be a people-powered campaign to attack clean energy proponents is the height of cynicism. Not to mention outrageously deceptive and potentially harmful to a good candidate, and to our planet.

Thumbs down Daniel Turner and Power The Future! Consider yourself officially exposed. 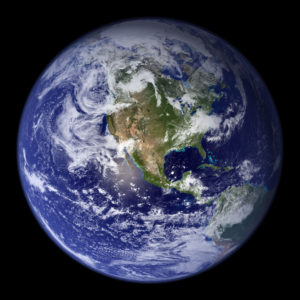 EDIT: I changed the title a little, taking out the Koch-funded part, until I can confirm that PTF is, indeed, directly funded by the Kochs. It seems likely that they are, but I don’t want LD to get into any trouble on my account.

UPDATE: I found a piece written last week about this man Daniel Turner and his new group.

Turner worked at the State Department during the George W. Bush administration, on the 2012 Romney for President transition team and at other organizations including Booz Allen Hamilton, Generation Opportunity and the Charles Koch Institute. His uncle, Bob Turner, was a Republican congressman from New York between 2011 and 2013.

When you read this next bit, please keep in mind that this group is a brand new one-man operation:

Turner said he has raised several million dollars in seed money from donors that “care deeply about the energy industry from a national perspective, and they care about the activism of these well-organized, ridiculously well-funded groups and the damage they do to our national conversation.”

But he would not name specific donors for his new energy group and did not comment on whether the Kochs are backing Power the Future.

Shall we get Daniel on the line and extract out of him WHO donated all that “seed” money??

Very interesting @magsview. Thanks for all your hard work.

No surprise, it appears to be another deceptive and cynical ploy on their part. In this case to try to link WV’s miserable economic situation to “the #WarOnCoal”.

(I’m resorting to screenshots for their tweets because I did some truth-telling on one of the group’s twitter posts, so I might get blocked, and then the link to the tweet wouldn’t work any more.)

The coal industry has long extracted West Virginia's wealth, and left the people poor. @Kenwardjr has been covering that reality better than anyone for nearly 30 years.

And we're working with him to cover how it's all happening again.https://t.co/f2NRlEJu4P

In the face of a major decline in the coal industry, families and entire communities that depended on it are hurting. Now that natural gas is booming, I’m reporting on whether we’ve learned anything from the past.

And now, in the face of a major decline in the coal industry, families and entire communities that depended on it are hurting.

What will coal leave behind? Many in West Virginia are starting to understand the painful answers to that question: Abandoned mine lands, abandoned pension plans, polluted streams, empty government coffers — giant challenges for local communities in supporting schools and other basic needs.

At the same time, political leaders and business boosters are pointing to natural gas as the way out of West Virginia’s downward spiral, as the answer to our state’s economic problems.

But others worry that the state is headed down the same road with natural gas that it’s been on with coal.

Power The Future appears to be a vehicle for the Kochs, and other profiteers, to be able to exploit West Virginia’s people and resources.

Here’s another good article from ProPublica on the current situation in WV.

The Coal Industry Extracted a Steep Price From West Virginia. Now Natural Gas Is Leading the State Down the Same Path.

“It’s déjà vu for the people who sat here 130 years ago and gave away our coal wealth to big out-of-state companies,” one state senator said. “That’s what we’re about to do again.”

T and R, mags!! I don’t do Twitter. What exactly is a screenshot? Power The future sounds like some dimwitted name a Koch, Mercer, Adelman, Mellon, etc. would dream up.

What I call a screenshot is just a picture, a snapshot, if you will, of whatever is on one’s computer screen, as per the attached.

I learned how to do it when I began watching live cams on the internet, as a way to capture cool images of wildlife, but it really comes in handy in the twitter world because it’s a way to record an image that could, and often is, unavailable later should you get ‘blocked’ by a tweeter or if they delete a tweet.

I just use my computer’s Paint program, but there are many programs out there that you can use. Let me know if you’d like me to walk you through it! 😉

And here’s a bonus screenshot, just for you. 🙂

The ‘pic’ was taken during a Safari Live stream from a huge wildlife reserve in South Africa back in August 2016. Papa lion with his cub. I don’t remember Papa’s name, but the lion pride is called the Nkuhuma pride. They’re a pretty successful pride of females and cubs. The males come and go.

I’m glad Beto is not tempted what so ever. Good report!

Beto went up a notch in my estimation by:
1. Sticking to his plan & his principles, and,
2. Being frank, honest & direct.

I think he handled the controversy well, which reflects positively on his future ability to govern.

I may have missed this here at TPW, but I literally just learned that my biggest reservation about Beto is apparently not an issue any more. And hasn’t been for months! (so hard to keep up)

I hadn’t been keen on his mandatory one year service proposal. But, just now, I read something that suggests he handled that one very well too.

“Talking about this being a requirement for everybody — that’s a few steps beyond the conversation that we’ve had already — so I want to tell you that I’ve heard you and I’m listening to you and that I made a mistake — without having listened to enough people and really have the conversation that we need to have on what this would look like getting so far out ahead on an issue.”

I didn’t necessarily need to hear him say that he “made a mistake”, but the way he showed an ability to step back and say, ‘you all seem to want to have more of a conversation about that one.’

I guess what I’m trying to say is that he sounds like he was responsive to people’s concerns.

Interesting concept for any politician these days, will they set aside their personal beliefs in favor of the people’s beliefs?