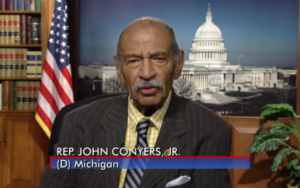 John Conyers Jr. is Dean of the House of Representatives, he was first elected to Congress in 1965.He is currently in his 26th term, and is one of only seven people to have served over 50 years in Congress.

Conyers was a founding member of the Congressional Black Caucus. Rosa Parks served on his staff for over twenty years and he visited Selma to meet with Freedom Riders multiple times in the 1960s. In many ways, his longevity makes him a living link to our past.

Four days after MLK was assassinated, Conyers introduced a bill in Congress to make his birthday a national holiday. It was finally signed into law 15 years later, in 1983. Conyers has been a indefatigable champion for many other progressive causes, chipping away for decades at resistance working to create a breakthrough.

His commitment is exemplified by his determined sponsorship of two bills:

Congressman John Conyers is on DKos and was posting intermittently till 2015. In a remarkable diary in 2008, he republished a 1974 article he’d written for the The Black Scholar. It made the case for Nixon’s impeachment. As a member of the Judiciary Committee, Conyers had helped draft the articles of impeachment that were prepared but never voted on, since Nixon resigned. The article begins:

Richard Nixon, like the President before him, was in a real sense a casualty of the Vietnam War, a war which I am ashamed to say was never declared.

Weeks after the 2016 election, Conyers highlighted the dangerous concordances between Nixon and Trump. Rep. Conyers enjoys a close working relationship with the Democratic Socialists of America and has been one of the most reliable progressive votes in Congress. He is also a staunch champion of individual rights, often getting the highest rating from the ACLU. He gets a 100% rating from the Human Rights Campaign, indicating his steadfast support for LGBT rights.

Under his chairmanship, the House Judiciary committee issued contempt citations to John Bolton and Harriet Miers for failing to produce documents related to the firing of nine US district attorneys. Committee staff, under his leadership, issued a report on the Bush administration’s rush to war in Iraq, and the scandal surrounding the abuse of prisoners by US soldiers and contractors. It was titled: “The Constitution in Crisis: The Downing Street Minutes and Deception, Manipulation, Torture, Retribution and Coverups in the Iraq War.” He has found opportunities to work across the aisle on certain issues, notably a bill to limit the Patriot Act. As chair of the House Judiciary committee, he argued against prosecuting Wikileaks for publishing documents leaked by Chelsea Manning. In supporting the right of the ordinary Americans to know how their government was using its vast surveillance powers, Conyers stood in opposition to senior Democrats and Republicans who wanted to prosecute.

After graduating from high school, Conyers became a member of the UAW (as his father was). He worked in the Lincoln Car Factory an on the staff at Local 900. Conyers served in Korea for a year and is skeptical of our military adventures. He favors dialog and diplomacy with North Korea (see the placard by the sofa):

You can’t be dean if you don’t look this clean. @RepJohnConyers – "Serving 🔥in Congress Since 1965" #Detroit #ClassicMan 💯 pic.twitter.com/DUvuTpsnnF

Conyers remains committed to responsible defense, he’s sponsored an amendment to prevent the sale of cluster bombs to Saudi Arabia as they’ve been used by the KSA against civilians in their war on Yemen.

Progressive Lion is an occasional series celebrating a politician or activist exemplifying progressive values. The goal is the recognize their achievements and lives. Our initial focus will be on those whose names do not come up frequently here. If you know aspects of their career or work that are not in the diary, please share them in comments.
— @subirgrewal

I think Pete DeFazio of Oregon could be on that list, given his progressive record. PB4, good lion?

Yes, DeFazio is on the list I am working on, he was a founding member of the CPC…

This is a perfect place for this.

By clicking on the image it is almost readable.

Fortunately my lap top has touch magnify so was able to see Kind from Wi is on the list.A Corp Dem in a state that went strong for Bernie

Today, @SenSanders and I are proud to introduce the Employ Young Americans Now Act. pic.twitter.com/UvBIRBoYds

T and R, Subir!! 🙂 Conyers has served Motown proudly for years. Wish we could clone him!

How our current political crisis began in Detroit…

If in Detroit, suggest trip to Mowtown Museum