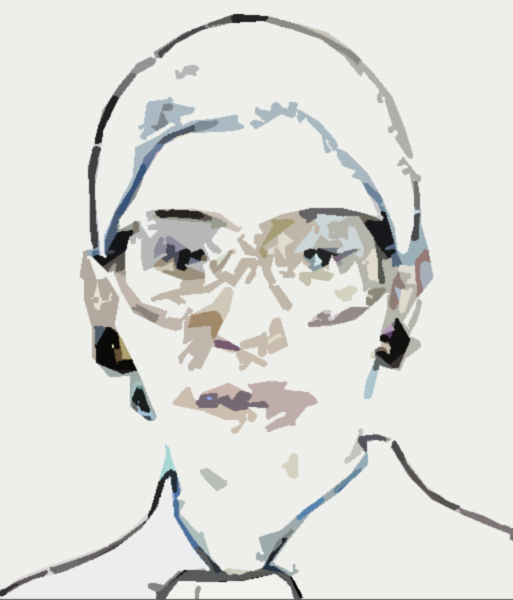 In case you didn’t know, Ruth Bader Ginsberg has inspired fan art, from tattoos to T-shirts to music to GIFs and memes and posters, a book — “The Notorious RBG,” and now, an art exhibit at Los Angeles’s Skirball Center (in the works for 2018). Here are excerpts from the article about it by Cristian Farias, in the Huffington Post:

Justice Ruth Bader Ginsburg is gearing up for the start of a new term at the Supreme Court, which kicks off next week in Washington and may or may not promise a lot of thrills and chills.

But far from the court’s marble corridors, in Los Angeles, Ginsburg’s life and times will come alive in the form of a new exhibit around Notorious RBG, a best-selling book that traces the justice’s legacy on and off the bench ― and the young, cult-like internet following she has amassed in recent years. 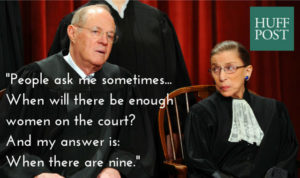 Together with the book’s authors, the Skirball Cultural Center and its curators have begun to patch together the pieces and artifacts that will be on display at an exhibit of the same name beginning in 2018 ― a project they expect will give visitors an “experiential” dose of the memes, tattoo art and cartoons that have lit up the Tumblr page that came before the book.

And yes, the plans come with the blessing of Ginsburg herself. 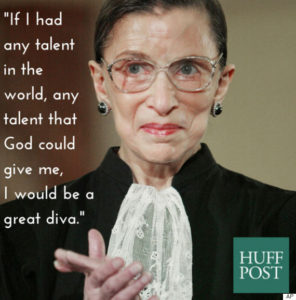 The curator, Cate Thurston, says that this show has essentially been created by the public, and is being fleshed out by the museum. 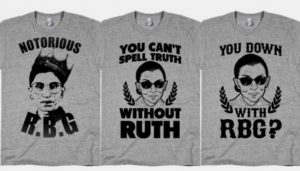 Irin Carmon, an NBC News reporter who co-authored Notorious RBG with attorney Shana Knizhnik, said that Skirball’s “civically minded” culture jibed well with what the book sought to accomplish: placing Ginsburg’s life and struggles in the context of her battle for gender equality and civil rights. The tale is told with no shortage of fan art and illustrations, and with enough archival material and legal commentary to win over skeptics. 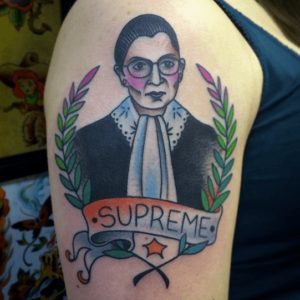 For some idea of what that might look like, one may look to the Tumblr page that begat the book, which Knizhnik created in 2013 as a frustrated law student after the Supreme Court invalidated a key provision of the Voting Rights Act of 1965. 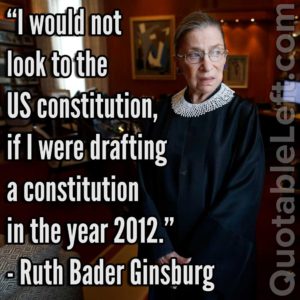 Notorious RBG, the exhibit, will open to the public sometime in 2018. In the interim, Ginsburg’s admirers might want to catch her in action when the Supreme Court returns to the bench on Tuesday. That day also happens to be the release date of My Own Words (Simon & Schuster), Ginsburg’s first book, a compilation of writings and essays.

What’s next for America’s most beloved Supreme Court Justice? Why a film, of course. In the works is a biopic following her career and the obstacles she battled as she fought for equal rights, “On The Basis of Sex,” starring Natalie Portman. Here’s a link for more info about that:  http://deadline.com/2015/05/natalie-portman-supreme-court-justice-ruth-bader-ginsburg-marielle-heller-focus-cannes-1201422929/ 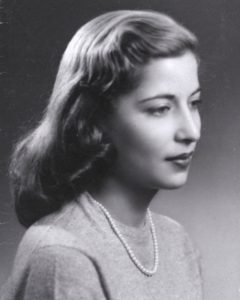 (A photo of the young Ruth Bader Ginsberg.)

And for a musical tribute, here’s Jonathan Mann’s “Ginsberg’s Hobby Lobby Dissent” — yes, her written dissent turned into a song — from Song a Day on YouTube:

Have a great day, everyone!

Love it. Thanks, NVP!

You’re welcome! RBG is pretty amazing, isn’t she? I love that she’s getting her due! 🙂

That song is pretty good! The line about the cost of an IUD being almost a month’s pay at minimum wage is quite effective as verse.

Surprising, and cool, isn’t it? I would never have thought a judicial decision would make good song lyrics!

I didn’t know that Ruth had inspired “fan art”! Count me as one of her fans.

I had seen some, but when I looked it up for the article, I found ever so much more than I suspected. And the tattoos! Wow! Even my own fan art, the digital piece done from a photo of her that’s at the top of the article, is now showing up on Google under “Ruth Bader Ginsberg fan art” now. I’m definitely a fan, too.