Bernie marched into Des Moines at the Capital City Pride Forum around 1:45. He was greeted by the largest crowd at the event

Bernie discussed Medicare for All with Iowans in Marshalltown. Dental care was raised as a huge concern because Medicare doesn’t cover it, or current Dental plans limit surgeries, still have large out of pocket costs.

Helping Sanders talk about health care were four panelists from different parts of the state who joined him at Dejardin Hall at Marshalltown Community College.

The high cost of prescription medicines were a key complaint.

“What is to stop a pharmaceutical company from raising the cost of your medicine, two, three or four times what they cost now?,” Sanders asked the crowd. “They do it at will. The pharmaceutical industry recently made $69 billion in profits.”

Sanders said when he is in the White House he will work to cut prescription costs by 50 percent.

He cited Canada’s health care systems as a model the U.S. should exemplify.

“I took several women from Vermont suffering from breast cancer who required a certain medication,” he said. “We drove the 50 miles from St. Albans, Vermont, a working class town, into Canada. We were able to purchase their medications for one-tenth of the cost of what some are paying in the U.S.”

While many in the crowd held Bernie signs and cheered him on during his remarks, others in the audience have not made up their minds with the Feb. 3, 2020 caucus nearly eight months away.

“I have not decided on a candidate,” former Marshall County Supervisor Denny Grabenbauer of Marshalltown said. “I am here with my granddaughter Abby. We wanted to come and see what Sanders’ campaign is all about.”

However Theresa Walton of Marshalltown is a strong Sanders supporter.

“I am for Sanders,” she said quickly. “I was for him in 2016. I supported him on caucus night and volunteered for his campaign. My husband was a Sanders delegate.”

“My sister lives in Vermont, and we have known of his (health care) record for quite some time. He irritates a lot of people because he has some good ideas. But health care … they have done well with that in Vermont and health care is a major issue in this country.” 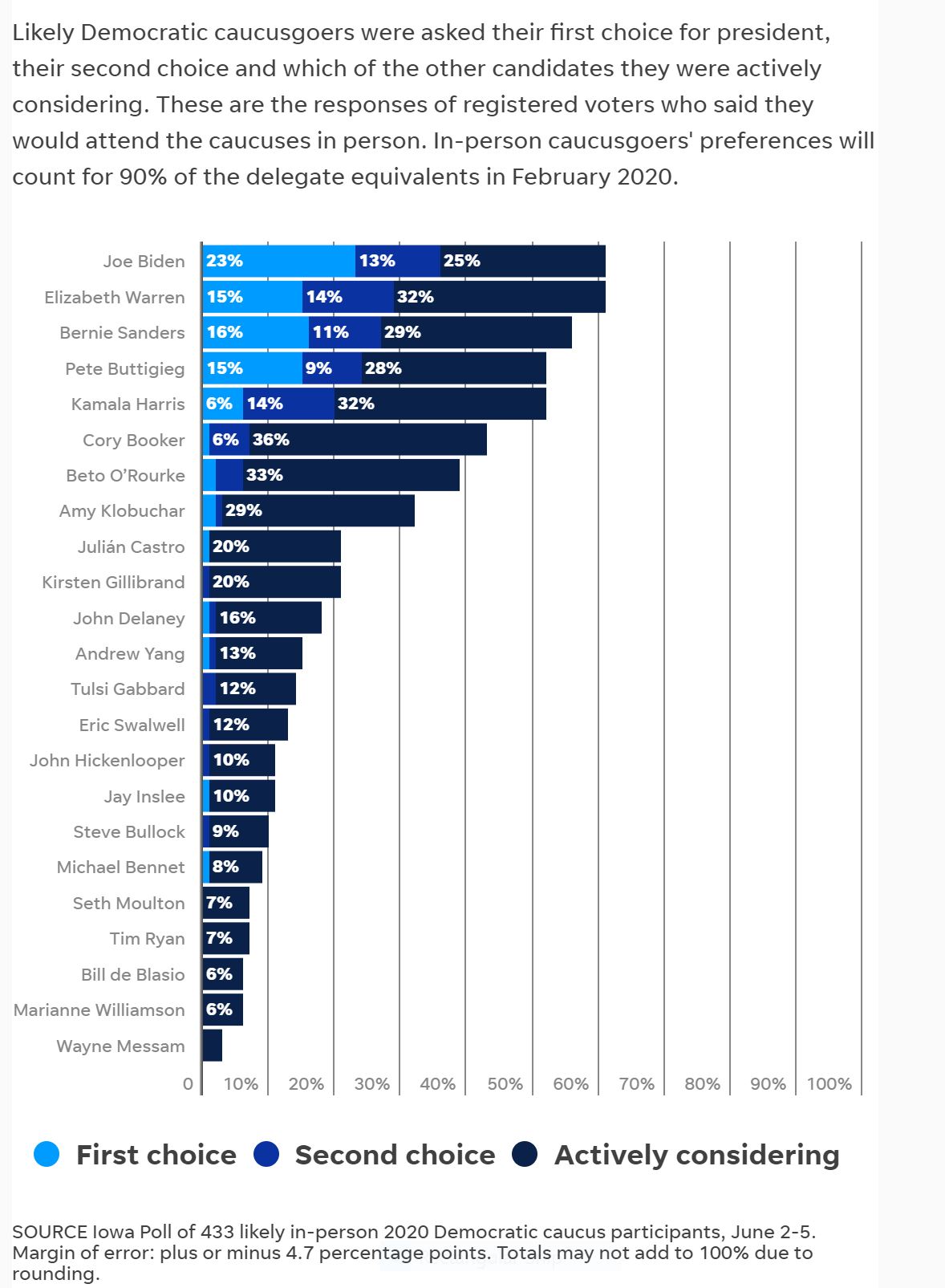 Bernie finished his day by firing up voters in Waterloo:

From the Waterloo Courier:

The 77-year-old U.S. senator from Vermont fired up a large crowd at the National Cattle Congress Pavilion, earning huge applause for his progressive platform including single-payer health insurance and free college tuition while attacking climate change and income inequality.

“We’re going to have to take them all on,” Sanders said. “We’re talking about Wall Street; we’re talking about the fossil fuel industry and the insurance companies and the drug companies and the military industrial complex and the prison industrial complex and the corporate media — all the the power that is out there trying to preserve the status quo.”

Bernie will be appearing on State of the Union this morning with Jake Tapper. He will be marching with McDonald’s employees on the Fight for $15 to the IA Dem Convention in Cedar Rapids.

More news, tweets, videos, and articles in the comments section. See you there!

Tip jar for Pride Day in Iowa. Note: I am continuing this post from yesterday since I’m continuing to add more items.

There is a small army of @BernieSanders volunteers out for #Pride Fest today #IACaucus pic.twitter.com/7vT27oMin2

Sanders more popular w the folks down here on Locust St than w John Delaney, who sat quietly in that white tent waiting while he spoke… pic.twitter.com/aavM4dfYJJ

Bernie’s comments are mainly directed to the LGBTQ community, says he wants to end all forms of discrimination, including housing, employment, military service, marriage, and a wedding cake at any bakery.

Trump is a bigot and a homophobe.

The campaign is celebrating 50th anniversary of Stonewall. Change often takes place from the bottom up.

Bernie informs the crowd that he supported gay rights before they were in vogue as a mayor and as Congressman, in voted against DADT and Defense of Marriage Act.

No candidate can tout his social justice record.

He lists other things that he would like to accomplish such as raising the minimum wage, deal with climate disruption, MfA, etc.

He concludes “We fight for justice for all.”

Happy to be an ally for queer liberation against bigotry and rainbow capitalism. #NotMeUs https://t.co/JPAqww5DH8

I'm going to do a thread on Bernie Sanders #ClimateChangeAction leader.
Here is Bernie ahead of everybody, as usual. 1987 and 1989, still as mayor of Burlington. https://t.co/CILjO6Lqq4

I encourage folks to go over and read the whole thread. It documents Bernie’s record on environmental justice.

Wonder if those well dressed people toward the state capitol knew they would have ⁦@BernieSanders⁩ in their wedding pic background?#capitalcitypride pic.twitter.com/a8avScNb1p

This is the link to the TYT Rally in Des Moines. Speeches start at 4 pm. There’s something connected to Our Revolution but not certain exactly what it entails.

Cenk is speaking to the rowdy crowd. The enthusiasm for Bernie is louder than for Warren, but still good cheering for her as well.

Lots of talk about fighting back against the MSM. TYT has decided to co-opt Benjamin Dixon’s term, Progressive Army, rebranding as TYT Army.

The MSM is painting a narrative that if we just get back to the time before Trump, everything will be fine. They, along with most of the Dem Leadership, do not understand that before Trump, it was not fine. Corporations have taken over the government. We should be making $17, 600 a year on avg, but we’re not.

The rally is about the fierce urgency of now, and not the tranquilizing status quo.

MSM is confused about progressivism. They define Joe Biden and Joy Reid as progressive. Do they want to do things that are progressive? The answer is no. Important to bring clarity as to what progressive means.

(I wish most of TOP were watching this speech, it’s terrific).

2nd Point of rally: we will fight for positions and get them delivered & passed.

The Dem party makers do not understand why many of us support Bernie or Liz Warren. It’s not complicated. It’s about the policies. Why do people like them? Media, do your GD job! We like them because Bernie & Liz fight for us.

Cenk is bashing the MSM’s characterization of Biden being likable.

I've signed the pledge for the 5 pillars as requirements to vote for a real progressive candidate: 1) $15 min wage 2) MfA 3) College for All 4) GND 5) End the corruption of big donors over voters. Will you sign? Go here: https://t.co/q7kdHggnJa

No money involved, you can volunteer, or answer as I did to keep me posted on number of pledges, which pols are signing the pledge (there’s a link to those who have already signed on). Very simple thing to do.

All candidates below are at 1%

Candidates not listed above are in image below and fell below 1% pic.twitter.com/tZUYWj3zBq

For the first time, the Iowa Poll accounts for new rules proposed this year by the Iowa Democratic Party that will allow Iowans to participate in a virtual caucus online or over the phone. The results of those virtual caucuses will account for 10% of the final delegate equivalents, regardless of how many people participate.

The rest of the results here, except where noted, use only those people who say they will caucus in person, and the margin of error is plus or minus 4.7 percentage points.

Because the Iowa Poll’s methodology has changed, the results are not directly comparable to past Iowa Polls of this presidential field.

Generally, though, Biden and Sanders led the pack in both the December and March Iowa Polls, as they do now.

Buttigieg was largely unknown by likely Democratic caucusgoers in March, the first time he appeared in an Iowa Poll.

“It’s like with the vitriol and the hatred and all the bad things people say — he seems to be coming out fresh,” said Patti Thacker, a Cedar Rapids poll respondent who says Buttigieg is her first choice for president. “He wants to get the country into a new mode and give us new hope there really is something better than what’s been happening.”

But even though she likes Buttigieg’s youth and vision, Thacker said she’s torn. She’s also drawn to Biden, who she says is her second choice for president.

“We need someone to sort of heal the country — to level things out and get us back on track,” she said. “I feel like he can do that on that hand.”

The best news in this poll is for Warren and Buttigieg.

And the poll was done *before* Biden’s abortion flip-flip.

Sen. Bernie Sanders: "I know all of the polls out there say Trump is going to be beaten, and they have me ahead of him in MI, in PA, in WI, battleground states — but let me tell you, I think Donald Trump is going to be a very tough opponent." pic.twitter.com/HpaGChm4Ho

Because “the moral clarion call to pursue impeachment is clear,” progressive advocacy groups announced on Friday a national day of action to push Congress to hold President Donald Trump accountable.

With events across the country set for June 15—over 100 are already mapped out—lead organizers MoveOn and By the People say they intend to show and grow public support for the House starting an impeachment inquiry.

“Donald Trump has broken the law, violated the constitution, and put the safety and future of the American people at risk,” said Alexandra Flores-Quilty, a spokesperson with By the People. “But by now, it is clear that Congress won’t act unless we demand it.”

“We need to take to the streets in every neighborhood in America to defend democracy,” she continued. “Join us on June 15 across the country—from the biggest cities to the smallest towns—as we make the urgent call for Congress to act and begin an impeachment inquiry now.”