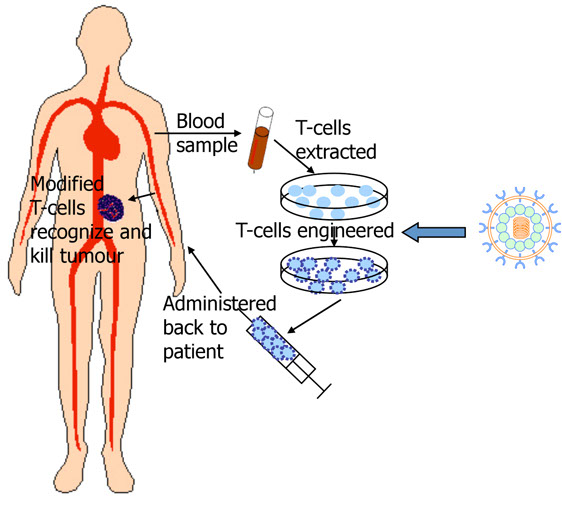 A Cure for Cancer?

There has been much hoopla recently about a possible cure for cancer — at least in the short term for certain blood born cancers — using an immunological therapy called chimeric antigen receptor T-cell therapy (CAR-T).

In the video above, Dr. Gary Gilliland of the Fred Hutchinson Cancer Research Center based out of Seattle, WA, states that the institute has achieved a 93% “cure” rate for ALL.

CAR-T is just one of a variety of immunotherapies, medical techniques that use the patients’ own immune system, specifically the T cells, to kill cancer cells “the natural way.”  T cells are removed from a patient, genetically modified to get past the cancer cells own defenses, and then infused back into the patient, often with spectacular results.

Keep in mind that these immunotherapies often do not require chemotherapy or radiation as adjunct therapies, and they are one-shot therapies, meaning that if they work, they work for the patient’s life time, a true cure.

The Fred Hutchinson Cancer Research Center is working on immunotherapy techniques for many other types of cancers, including solid tissue tumors such as non-small cell lung cancer, ovarian cancer, pancreatic cancer, and prostate cancer.  Specifically, they are using an immunotherapy called tumor infiltrating lymphocytes (TIL) to treat advanced cases of melanoma:

Meanwhile, over at Duke University, a most interesting new type of immunotherapy to fight brain cancer is emerging.

In a clinical trial under the direction of Dr. Matthias Gromeier, a modified form of a polio vaccine is infused directly into a particularly virulent and deadly form of brain cancer called glioblastoma, the same tumor that killed Senator Edward Kennedy.  Patients with glioblastoma generally die within months (if the tumor is left untreated).  Surgical excision has only limited value, because the tumor invariably returns.

But patients directly infused with the weakened polio virus have shown great promise.  One quarter of 24 patients in the trial have survived for 24 months, with three of the 24 patients still alive at 36 months.

Apparently, when the polio virus is infused directly into the brain tumor, the patient’s immune system can see the polio virus and attack it, thereby killing the cancer cells in the process.

This treatment, called PVS-RIPO, has not resulted in the destruction of brain nerve cells, or caused poliomyelitis in any form.

It’s OK To Be Smart

As promised, each week I offer a new youtube science based channel.  This week I offer “It’s OK To Be Smart”, starring Joe Hanson.

This sort of boggles my brain. It is hard to visualize the immensity of it all.

© Chandra X-ray Observatory Center
© Chandra X-ray Observatory Center / Reuters
5K3
Astronomers have long pondered how many galaxies might exist in the universe – and the answer appears to be a staggering two trillion. The figure, obtained from Hubble Telescope images, has shocked scientists who estimated the number to be at least 10 times smaller.
Trends
Space exploration
The finding wasn’t easy to come by. An international team of scientists examined deep space images taken by the Hubble from over the past 20 years, and converted them into 3D pictures. From there, they measured the number of galaxies at different times in the history of the universe, going back more than 13 billion years – near the time of the ‘Big Bang.’

The researchers, led by Christopher Conselice of the University of Nottingham, also used new mathematical models which allowed them to infer the existence of galaxies which telescopes cannot observe. The team’s findings are detailed in the Astrophysical Journal.

Both sections, the cancer cures and the camouflage video, are really interesting, thanks, bebimbob. I will try to pass on the link.

I agree! How cool. Thank you, @bebimbob!

Add me to the Thx to bebimbob